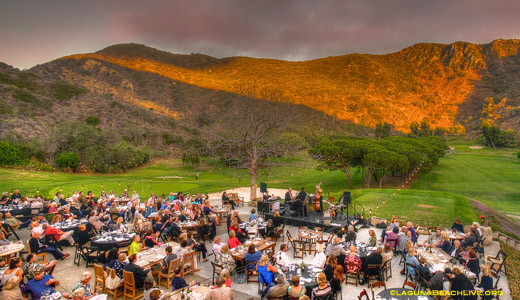 Once again at the Ranch on the Harvest Patio (fabulous in and of itself), the 7-part series offers single tickets for just $17 (including valet parking) or $136 for the entire season. Buy tickets here. No kidding, these tickets regularly sell out weeks in advance. Don’t hesitate!

Kicking off the season with a real boom, Dave Damiani and his 10-piece big band, the “No Vacancy” Orchestra, will be joined by Haley Reinhart, one of the top five finalists in American Idol’s 10th season. If you’ll remember, Haley had a great bluesy sort of voice whose consistent performances caused some of the biggest controversy at her unexpected departure. She, however, has created a significant career, and is now touring internationally with Post Modern Jukebox.

Damiani, Haley and the 10-piece band will be celebrating Frank Sinatra’s 100th birthday … what a phenomenal way to kick off our summer of jazz!

Concerts are at 6:00 p.m. with doors open at 5:00 p.m. The Ranch is firing up a new menu of dining options, which can be purchased with a concert ticket for an additional $26.50 or at the door for $30. Cash bar is available all night.

Seating is assigned, so friends who wish to sit together should notify LagunaBeachLive at least 24 hours in advance.