On Oct 1st, We Honor the Man Who Honored Our Beautiful Town 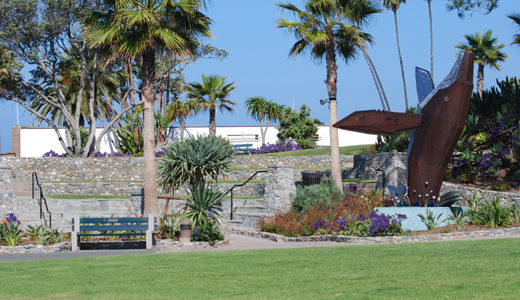 Whenever I have visitors to Laguna Beach, they just can’t believe how luxuriously beautiful it is. Every street, every shop front, every park, even random bus benches and water fountains are a beautifully combined collective of design and forethought.

It reminds me of a story I read once about a minister who came upon a man’s gorgeous farmland, with everything down to the mailbox meticulously manicured and freshly painted. He told the farmer that God had certainly blessed him with a beautiful farm. The man thought for a moment and replied, “Yes, he has and I’m grateful. But you should have seen it when he had it all to himself.”

While Laguna Beach is definitely perched on one of the most striking coastlines in the world, we have an army of people who’ve made it their mission to blueprint and beautify every nook and cranny of our town so that it pays a constant tribute to the striking coastline it rests upon.

Back in the 1940s, one resident here in Laguna Beach – Harry Lawrence – decided it was important that we work in a concerted effort toward this end. He was a very active President of the Laguna Beach Chamber of Commerce, and he set up the city’s first Beautification Committee in 1952. His greatest achievement was the design and build out of Main Beach Park in downtown Laguna Beach, which set the precedent for every park and architectural zoning platform in the city’s limits. 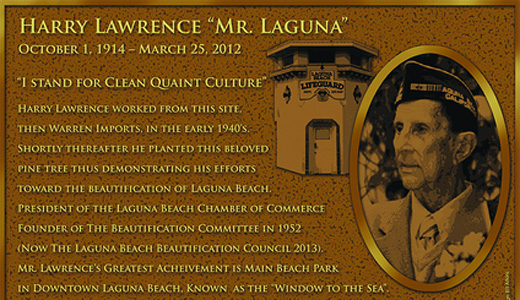 Harry’s commitment to beauty in Laguna Beach stretched across, literally, thousands of projects over seven decades. He passed away last year at the ripe old age of 98.

Tomorrow (Tues, Oct. 1st), has been declared Harry Lawrence Day in his honor. The current Laguna Beach Beautification Council is inviting anyone appreciative of this beautiful town to a ribbon cutting and plaque dedication at the awesome pine tree Harry planted in front of his office in the late 1940s. I’m betting most of us drive by this tree almost every day as it has a commanding presence in the courtyard next to the coming-soon Selanne Steak Tavern (formerly French 75).

The ceremony takes place at 2:00 p.m. Even though I never met Harry Lawrence personally, I have an abiding respect for the love this man poured into this beautiful town of mine. Further, I have a growing appreciation of our “little committee that could,” the current Laguna Beautification Council, that does more behind-the-scenes work in this town than we can even guess at. These people deserve our hats off recognition for their dedication to keeping Laguna the stellar, singularly unique town that it is.

Take a few minutes from your schedule to attend this dedication ceremony. I’ll see you there!