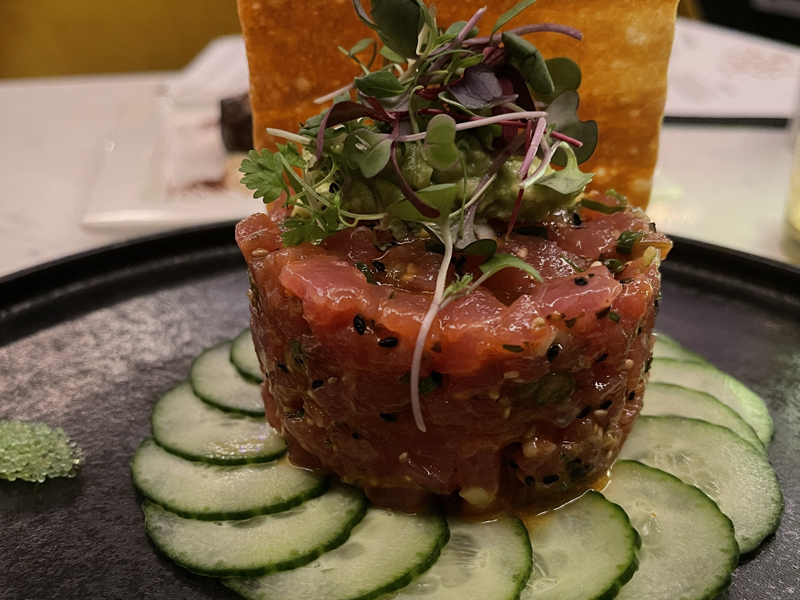 In case you aren’t privy to my social media platforms @bestoflaguabeach, I thought I’d use this column to share some of my favorite single items that you definitely want to follow up on.

Before I explain all these beautiful food and drink items, let me answer those questions that have already arisen in your mind: 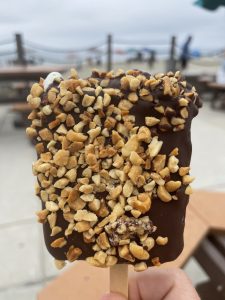 As many of you know, The Lost Pier Café´ is little sister to the Harvest restaurant at The Ranch Laguna Beach, and the owner of said resort, Mark Christy, was a giant fan of the Balboa Bar in Newport Beach as a kid. He asked to re-introduce this luscious treat, and the chefs have done a marvelous job with soft-whip ice cream swirled in fresh chocolate and rolled in optional salty chopped peanuts. It is an undiscovered gem here in Laguna Beach.

And speaking of Lost Pier Café …

This little beachside café at Aliso Creek Beach puts the old-school beach stand to shame. The menu is loaded with fresh, fun sandwiches, salads, tacos and a significant breakfast line-up that includes this Breakfast Croissant Sandwich. While their hearty smoked bacon breakfast burrito is still my favorite, you can’t go wrong with this deluxe version with one of the best cups of coffee and views in town. 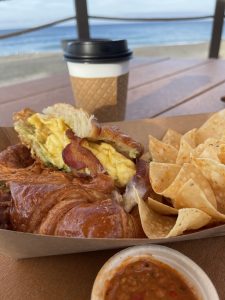 The largest and freshest Shrimp Ceviché around

Our SoLag Coyote Grill serves up three kinds of ceviche. I’ve always been preferential to the Crab Ceviche but this time I ordered the Shrimp Ceviche after a week of rather uninspired dishes bearing the same name elsewhere. The Coyote Ceviche arrived on a full-sized dinner plate with an entire basket of chips on the side. It’s a full-sized meal of the freshest shrimp around at nearly half the cost of other places I tried (which shall remain unnamed). 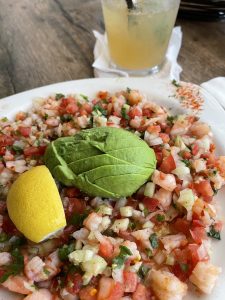 A giant’s take on taco salad

Yet another item I hadn’t yet tried, a couple weeks ago I opted for South of Nick’s El Gringo Taco Salad for lunch. The enormous entrée arrived, far exceeding the size of an average loaf pan. I have no idea how or where they bake up this crispy shell goodness (I picture these shells stacked to the ceiling in the kitchen). 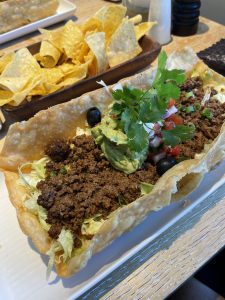 The Drake Laguna Beach’s Ahi Tuna Tartare is so beautiful, you may be inclined to just stare at it in wonder. This work of art is a beauty to the palate, too, with fresh ahi tuna and crushed avocado ladled carefully on cucumber slices in such a careful ring that they look like a troupe of synchronized swimmers. The wonton chip stands stalwart as the backdrop while wasabi emulsion dots the plated finish. It is a showstopper. 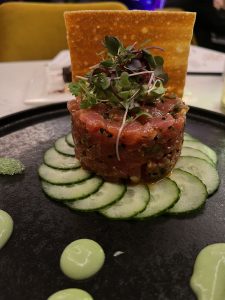 When my Philly-born buddy asked me if there were any steak sandwiches worth their mettle in Laguna Beach, I had the answer: the Prego Steak sandwich with Peri-Peri sauce at Mozambique.

He was very pleasantly surprised.

Tender filet mignon is lathered with caramelized onions (and a host of pile-on options if you prefer) in a squishy brioche bun. You can pick it up and bite into it without it falling apart as most giant sandwiches do; it’s that tender. The dipping sauce of Peri-Peri on the side is Mozambique’s signature item, and well worth new memory making for any steak sandwich you’ve had in your past. 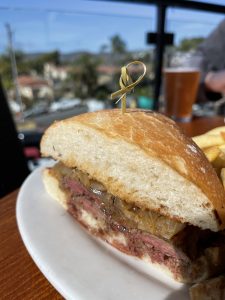 I was mortified when I discovered the Prego was no longer served on the lunch menu (it’s only on the dinner menu), but the team is happily willing to bring you this magnificent treasure at lunch if you just ask nicely.

Soup for the season

I was remiss in not taking a photo of the Drake’s featured Garlic Soup the other night. It was such a surprisingly mellow taste that I managed to wrench the main ingredients from Chef Nick for my own Thanksgiving try. It was delectable. 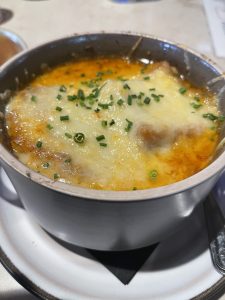 I did, however, snap a shot of Chef Rainer Schwarz’s classic French Onion Soup at his Ocean Ranch location, Hendrix. The urn it arrives in is sizable and it’s filled to overflowing with long-basted, caramelized onion soup and a thick slab of melty gruyere cheese toast. It is definitely a meal in and of itself, and a perfect solution to the cold and foggy days of California’s winter.

Looking for last-minute inspiration? Watch for my ongoing food and drink posts @BestofLagunaBeach in both Instagram and Facebook. Direct message your photos to me; I’d love to see what you’re trying around town!