Laguna Beach Halloween Party – This Is Where You Want To Be 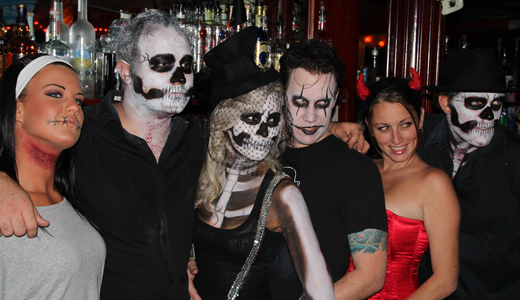 Two years ago, there were two INFAMOUS and highly revered PRIVATE Halloween Parties in Laguna Beach. In 2011, though, The Dead Man’s Party went public, moving from a private residence to the White House Restaurant on PCH just a block south of Forest. Why the commercial entity? Because it simply had grown too large for the confines of its proper neighborhood in North Laguna Beach.

When I first moved to Laguna Beach, I heard about these two private Halloween parties – one in North Laguna Beach and one in South Laguna Beach – but each required a formal invitation, and it took a few years before I was enough of a “resident” to be invited to both … these are significant parties!

The Halloween Party that’s still reliant on private invitation only – (and they mean it) has been hosted by one couple for 40 years and, at last count, I’d say about 300 people attend. Sorry again though, private invitation to this Boo Fest still required. You have to personally know someone who can get you in. Please don’t try to storm the gates. Storm Troopers await you; Darth Vader close behind. You have to play very nice for an invitation.

Turn your attention, instead, to The Dead Man’s Party. Now THIS is a different story.

All souls (living and non-living) are invited to participate, and this party just gets larger and larger every year. This North Laguna Beach Halloween phenom was created by Bruce White (aka: Shark Bite Lounge), and he’s still at the helm for the live music and extreme haunted house décor. This is a seriously insane party, complete with renowned tunnel entrance that tends to intimidate even the heartiest of souls.

This fantastic party won’t allow you in the regular PCH entrance, but through said -famous tunnel from the back alley behind the restaurant. Very decent cover charge. Live bands. And the party rocks till whatever hour.