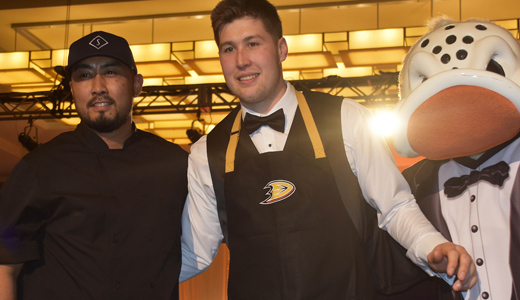 Dux in Tux, One of the most wanted tickets in Orange County has become the annual Dux in Tux event, a giant fundraiser hosted by the Anaheim Ducks hockey team. In its 17th year, Dux and Tux took place last Thursday, Feb. 23rd, at the Anaheim Hilton. I was so very pleased to see that four Laguna Beach chefs had been invited to participate in the prestigious event.

Each year, just 30 chefs are tapped to prepare a multi-course meal for their own table of guests. Even better, each chef is paired with an Anaheim Ducks hockey player who acts as “sous chef.”

This is one heady evening. The invited restaurants compete in tablescapes, food bites and drink contests, and I’m not sure which of the three is more decadent. Many of the tables were so jaw-dropping creative that they almost stole the show entirely from the award-winning chefs in play. Our neighbor, CDM’s Five Crowns, took the evening’s table award for the second time in a row, this year showing up with flags flying for each of the noble houses in Game of Thrones. Even their serving staff was in full costume, from regal kings to serving wenches.

But Let’s Get Back to the Food …

Personally, I think Chef Josh from Selanne had the one-up on everyone at Dux for Tux as his table had the players’ Stanley Cup acting as the centerpiece, and he was also “assigned” Teemu Selanne as his sous chef.

Once paired with their hockey player sous chefs, the chefs went to work, sometimes rushing “back stage” to the giant prep kitchen and returning with great trays of appetizers, fish, meats and more. True to form, a great deal of the cooking was done right in front of their table of guests.

It was a cacophony of fun and delight as more than 400 guests were treated to rare, off-menu innovations and, with an air of relaxed humor, the Ducks raised hundreds of thousands for the Anaheim Ducks Foundation.