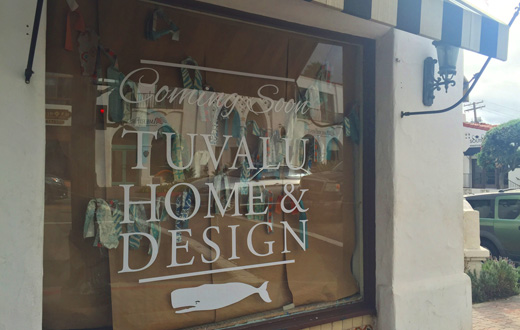 When Laurie Alter opened Tuvalu Laguna Beach in 2003, she never imagined the fast expansion it would enjoy. Designed with the idea of providing a treasure trove of furniture, accessories and artwork in a casual, coastal vibe, the Forest Avenue store was an immediate hit.

Now, she’s opening a second Tuvalu in San Clemente in the former Hobie shop at the top of Del Mar Avenue on El Camino Real. (Meanwhile, the Hobie store has relocated to larger space just a couple blocks down at 167 Avenida Del Mar.) Hopes are they’ll be open by August 1st.

Alter was born and raised in Laguna Beach, but lived in Idaho for eight years before returning to Laguna with husband and kids in 2002. While in Idaho, she’d taken up antiquing and décor work and had eventually opened her own antique shop there, Wild Goose Chase.

At Tuvalu, Laurie original idea of showcasing interesting and one-of-a-kind finds blossomed into an additional interior design division in 2012. From there, it simply expanded again as Laurie and the store, Tuvalu, began working closely with her husband (Hobie Sand Bar Restaurant) and brother, Mark Christy (The Ranch), in extensive design and accessory work. (I cannot wait to show you her finished work in the rooms at The Ranch!)

The new Tuvalu in San Clemente will feature the same concept – coastal home furnishings and a design center with head-to-toe design services. Congratulations to Laurie for spreading the Laguna Beach love!