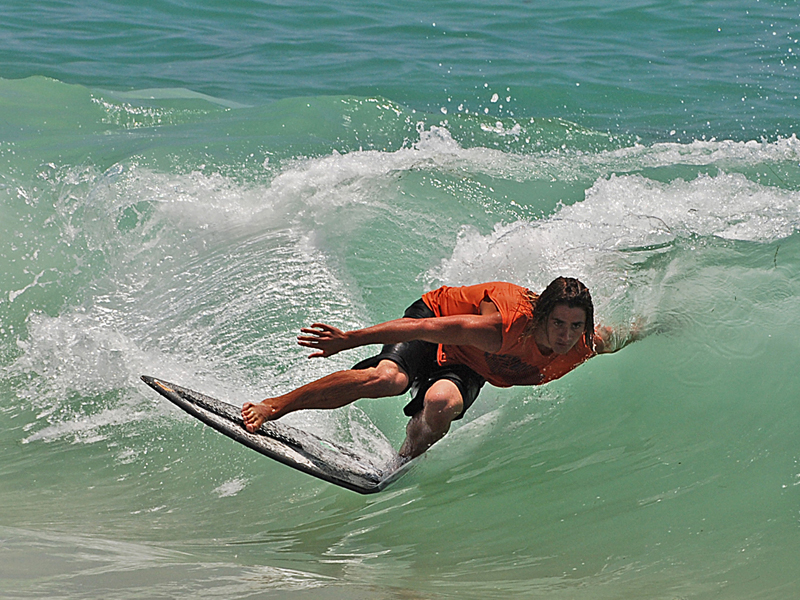 In May this year, the Pros’ United Skim Tour began 2019’s seasonal run for the crown at a full-on gallop. The Tour hits both coasts, with Cabo San Lucas and Santa Cruz early in the season, followed by East Coast Outer Banks (NC) and Dewey Beach, Delaware continuing to rack up points for frontrunners. (This year was the first that Vic Skim took over and ran the Dewey Beach event in June.)

Nothing, however is bigger than “The Vic” Skim Contest, the granddaddy event of them all. And it all happens again this year on the weekend of Aug. 17th-19th at Aliso Creek Beach.

Year to year, the worldwide leaderboard tends to belong to South Laguna (SoLag) skimboarders who began skimming as mere groms. Given that skimboarding was actually and officially launched many decades ago in South Laguna Beach, it’s no surprise that Laguna’s own continue to dominate the worldwide scene. This year, however, a serious jostling has begun to occur as East Coast players and frontrunner Brazilian Lucas Fink are creating a topsy-turvy scene in the tour’s event rankings.

Note: These rankings do not include the latest Dewey Beach results, which are not ye listed on the UST website
With Fink in 1st, position, returning champ and SoLag favorite Blair Conklin is charging up the ranks from 2nd place. 3rd place belongs to Johnny Weber, a towering competitor who moved from Lewes Beach, Delaware to Dana Point stands in 3rd place, while social media icon Austin Keen (another East Coast transplant to Dana Point many years ago), sits in 4th place.

Interestingly, we have more and more worldwide skimboarders transplanting to SoLag, claiming the surf here is what ideally trains them for any contest in the world.
5th ranked Perry Pruitt moved here from Delaware’s Outer Banks just a few years ago.
6th ranked Eddie Dixon moved to Dana Point from Tybee Island, Ga.
And 11th ranked Patrick Mack (one of my favorite carvers) moved himself here from Florida in 2007.

For 32 years, the hallowed Vic always occurred in June at Aliso Beach (where skimboarding was founded) except in extreme, rare situations when the entire party was forced to move south to neighboring beaches. A few years ago, though, The Vic’s event’s founder, Tex Haines, moved the giant fest to late August to take advantage of the larger swells in late summer.

It’s a giant weekend fest with more than 100 professional men and women skimboarders participating from all points of the world, and about 200 amateurs (groms) journeying their way through the ranks. Many skim and surf related vendors dot the sand, and there are plenty of food and drink options for all. Heats begin at about 7:030a.m. each morning, and the days stretch long into the afternoon before a winner is crowned on Sunday afternoon.

Whatever the vibe on the beach, we’re all hoping for extremely agro conditions for our pro boarders. And no matter what the weather, you can be assured of an epic event.