Larsen is Friendly Hospitality at its Finest 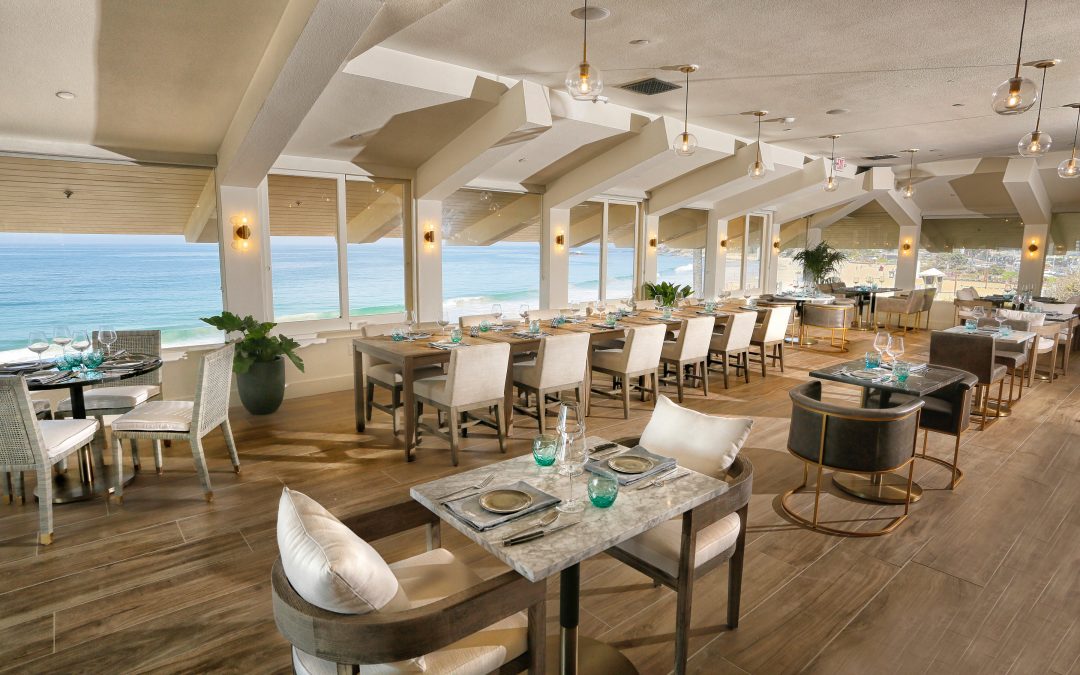 With the new Larsen restaurant open in Hotel Laguna, everyone and his neighbor can be seen at the new swank digs. I was one of those people last week, meeting my two dear friends, both chef concierges at Montage Laguna Beach and The Resort at Pelican Hill. These lead concierges and their teams are responsible for sending thousands of their own guests to our Laguna restaurants. Calvin (Montage) and Andrew (Pelican Hill) were eager to experience Hotel Laguna’s new offering for this reason.

We started with craft cocktails in the bustling bar, edging our way to a corner of the bar’s counter on the patio side. It was another spectacular autumn evening, and we watched the sun set with as much awe as the first-time visitors standing next to us. 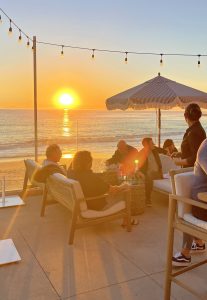 At our designated reservation time, we wandered into Larsen’s interior and were seated at a window table. It’s such a pleasure to be back in this space, the iconic beachside restaurant that has found a way to reinvent herself once again. Larsen’s décor is in neutrals, playing a perfect backdrop to the expansive ocean and sky views.

There is nothing neutral, however, about the Larsen dining experience. This is, after all, where Michelin-starred Chef Craig Strong shines.

A longtime resident of Laguna Beach, Chef Craig first came on our radar at the Montage’s Studio. During his residence there, he took Studio to one of the only 5-star rated restaurants in Southern California.

When he opened and later closed the restaurant, Ocean at Main, his biggest fans worried that we had lost this talented chef to another town. It was a relief when it was later announced that he had stepped into operations with the Laguna Beach Company, taking on [seven-degrees] and Terra Laguna Beach at the Festival grounds as we emerged from our COVID shutdown. Just as the summer season wound down, Chef Craig was busy again, this time opening the long-shuttered restaurant at Hotel Laguna.

“You can’t ask for anything better than this,” Chef Craig told me with his usual grin “Coming to work is like going on vacation every day,” he said.

When You Meal Starts With a Cigar …

Enjoying Chef Craig’s food feels like a vacation to me, too. As we perused our menus, Chef sent out the very thing we had already decided on – the Short Rib Cigars. 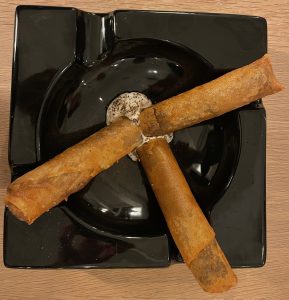 If you know Chef Craig, you know he doesn’t do anything normal or average. True to expectation, the dish showed up in an oversized (and heated) ceramic ashtray. Three beefy “cigars,” each stuffed with tender braised short rib meat, were flash fried in thin rolled pastry much like wonton wrappers. The “ash” in the center of the plate was a mix of horseradish crème fraîche and black pepper. Start your dinner with this appetizer and you know you’re in for an eventful evening.

The appetizer menu also includes Market Oysters, House Smoked Salmon Rillette (one of my favorites at Studio), Grilled Spanish Octopus, Seared Scallops and Roasted Squash Soup (whose recipe I’m going to try to wheedle for my own Thanksgiving feast).

An Imaginative Entrée for Everyone

The entrée menu covers a range of nine crowd favorites, from Lobster Fettucine to pork loin, grilled chicken, a Hotel Laguna Burger, two fresh fish catches, two steak features and a lovely Vegetable Pot-au-Feu. It’s more than enough to offer during its first opening weeks and the kitchen has already proven that it knows how to turn out each dish.

My friend, Andrew, ordered the Striped Sea Bass, accompanied with cauliflower cacciatore and a sweet pepper piperade sauce (piperade is a sort of vegetable stew of peppers, onions and tomatoes with a hit of spice). 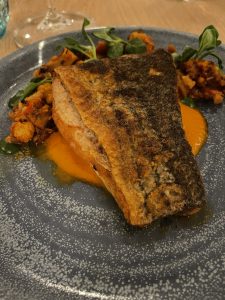 Having already promised that we would share portions of our entrees with the others at the table, I was awarded several bites of the flaky fish encased in its savory crisped skin. While I haven’t actually confirmed this with Chef Craig, I’m betting he’s used a dose of his own hot sauce concoction, Salsa Fuerte, in the purée. Chef’s Salsa Fuerte has become my all-time favorite hot sauce as it’s almost a buttery blend of so many herbs and spices that I can’t even distinguish one from the other. 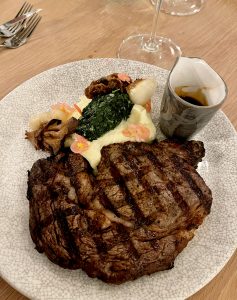 My friend, Calvin, ordered the 14-ounce Grilled Ribeye Steak. A cut this large will absolutely squash anything plated beneath it, so the dish arrived with a neighborly tasting sensation of spinach, smoked mushrooms and potato purée. A thoughtful beaker of au jus accompanied the dish, offering just enough to either pour liberally over the steak or do as we did with small pours and brisk dips.

I chose – of all things – the Grilled Chicken. Many restaurant diners tell me that they never choose the “boring” chicken dish, but I use it as a telling measure. If the soup and the chicken is spectacular, you’re almost guaranteed that everything on the menu will follow suit.

My hedged bet did not lead me wrong. It was, indeed, a spectacular dish with a beautifully balanced savory-salty-sweet combination in every bite. The Grilled Chicken was ladled onto lemon-glazed farro and broccolini with a sherry chicken jus spooned across the crown. 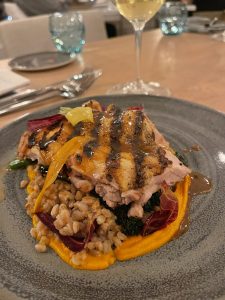 During the dinner, Chef Craig came out to chat with us, giving his old Montage friend, Calvin, a bear hug. After walking through our questions and amiably talking about the ongoing development at the Hotel, he suggested desserts. Chef Craig has Pastry Chef Chris Agular in residence and he couldn’t be happier, he told us, because Chris creates Craig’s favorites “every hour of every day.”

In minutes, a Lemon Tart and Pear Crème Brulée arrived. Frankly, I can’t even announce a favorite. 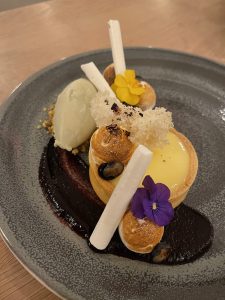 The Lemon Tart was a work of art with the house made pistachio ice cream (my favorite) effortlessly smoothing the tartness of the lemon. Lavender meringue pirouettes added a taste of elegance while dollops of flamed meringue added a lovely caramel crunch to the dish.

Chef Craig noted that the Pear Crème Brulée was one of his favorites, and for good reason. This is crème brulée at its most decadent and docile, all in the same spoonful. Crunchy almond cookie spears and a memorable ginger ice cream adorned every bite. 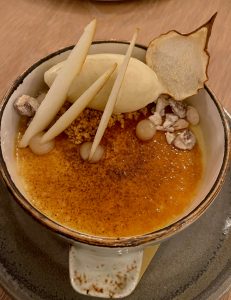 Getting Her Sea Legs

Barely open three weeks, the Larsen restaurant and adjacent bar could be overwhelmed with all the good will from the community. While they’re experiencing staff shortages like every other restaurant in our town, Chef Craig and his team are operating with grace and a friendly “can do” attitude.

“It takes patience because you want to run when you really can just sort of jog,” Chef Craig told me. “But if anyone is teaching us patience, it’s this place – Hotel Laguna. She’s been in it for the long run, and she’s seen it all. I know that she knows we’re all on the right track.” 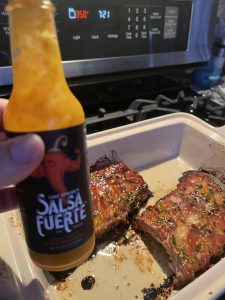