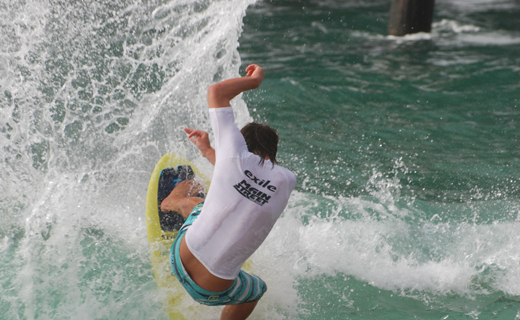 The professional circuit for skimboarders is seeing its last official skim event of the season in the United States with this weekend’s “Balboa Oktoberfest” at the Newport Peninsula.

Better known to skim insiders as the “A Street Event,” this hugely popular event normally pulls in more than 100 pro skimboarders before they wrap, lock and load for warmer off-season climes.

In recent years, we’ve all sat through dreary skies, frigid cold and fog so thick that you could just see the boarder’s trunks emerging from the plumes of white fog as they near the shore. THIS year, however, blue skies and balmy weather is predicted, and the swell futures aren’t looking so bad, either.

It’s your last chance to see the top pros in action on the UST 2013 Tour , and root for the two internationally top-ranked skimboarders, one of whom reside in South Laguna Beach – longtime favorite Sam Stinnet.  Sammie, the two-time UST champ, hopes to retain his golden belt against the ever-affable Austin Keen, who started up the ranks from his Tybee Island, Ga., home just a few years ago. Now, Keen is within mere single digit points of an upset. And the rest of the Top 10 … well, that’s up for grabs right now.

Of the top 14 in play, nine of the top contenders are all born-and-bred Laguna Beach residents (Sam, Morgan Just, Blair Conklin, Teddy Vlasis, Brandon Sears, Jake Stinett, Tim Fulton, and Beak Dog Bill Bryan). Folks, we’re not talking regional player ranking here. These eight guys are in the top 14 in the world against more than 100 professional pros on the circuit.

Head on down to the A Street parking lot on Saturday morning on the Newport Peninsula. Heats begin at about 8:00 a.m., with the pros expected to take to the water at about 9:30 a.m. Heats continue to semi-finals through Saturday afternoon, and finals step up again on Sunday morning, same time, same place.