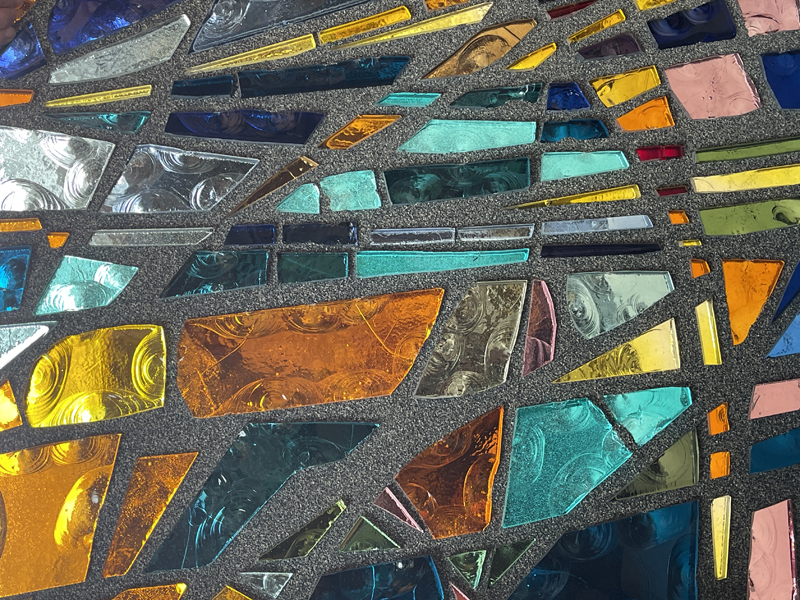 It’s been 42 years since these two buddies met at Laguna Beach High School.

That may seem like ancient history to Dirk Maes and Kaj Garmshausen. In a matter of weeks, though, the two will certainly be making history with the installation of a 3,000-piece stained-glass work of art for Dana Point’s St. Edward the Confessor Catholic Church.

Using a plotting map and Kaj Garmshausen’s original colored sketch, Dalle de Verre stained glass master Dirk Maes is completing one of the regions largest stained glass installations for Dana Point’s St. Edwards Church. The project is so significant that he’s brought in Kaj to apprentice with him.

Over 10 feet high and more than 34 feet in length, the magnificent stained-glass installation, a total of 22 panels, will weigh close to 4,000 pounds. It required a full team of structural engineers and architects at Domus Studios to create a steel framework sturdy enough to house the entire creation which, fittingly enough, is themed “The Creation Story.”

This particular creation is also a rarity in that it is done in the Dalle de Verre (“slab of glass”) technique, a faceted glass style first developed in Paris by Jean Gaudin in the early 1930s. Gaudin discovered that breaking or chipping the thick glass slabs created variants and facets that more beautifully reflected and refracted light. The process transforms thick pieces of glass into a mosaic of cascading, rich color. 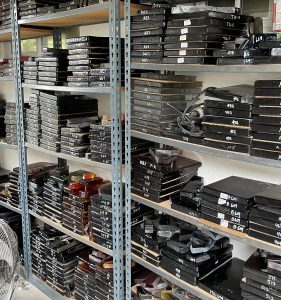 There’s something, though, that makes this stained-glass project even more special: Dirk’s father, Joseph (who went by “Jos”), crafted the original five stained glass panels for this church 29 years ago. Dirk and Kaj have simply continued where Jos left off.

“Dirk’s father’s work was impeccable. This is really an extension of what he imagined and created 30 years ago. We owed it to him to get it right,” said Kaj. 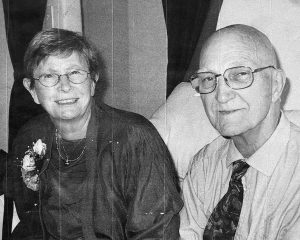 Jos Maes trained himself in Dalle de Verre style in Belgium, and later moved to the U.S. as one of the premier artisans of the craft. Jos is pictured here with his wife (and Dirk’s Mom), Denise.

Born in Belgium, Jos attended art school for 10 years, honing his craft in stained-glass creations. There were no formal mentors in Dalle de Verre at the time, so he eventually taught himself the craft, relying on his foundational knowledge in stained glass to make the leap. When he moved to the United States in 1956, he was one of just two or three Dalle de Verre practitioners in the country. In fact, years later, one of America’s most well known stained-glass artists, Elizabeth Devereaux, mentored for four years with Joseph before setting up her own successful studio.

“My Dad was the first guy in the Orange County yellow pages who did stained glass, let alone Dalle de Verre glass,” said Dirk. “After we moved from Pasadena to Laguna Canyon in 1963, he set up shop at what used to be Kubisak’s Antiques and started taking on all sorts of church and retail projects.

“He became well known for the work he was doing in churches, so St. Edwards called him in the early 1980s to create those first five panels,” said Dirk. “At that point, I was old enough to help him with the project, so it’s been quite a walk around the circle for me to arrive back to where it all began.”

Doodles on napkins and lots of hand-drawn sketches

At about this time last year, the architectural firm employed by the church contacted Dirk to discuss an expansion of the stained-glass edifice in the narthex (lobby) of the church. As the scope grew larger, Dirk decided he might need help pulling off the design of such a large piece, so he called in his high school buddy, Kaj Garmshausen.

More renowned for his beautiful wood sculptures and whimsical pen-and-ink Santa Claus holiday cards, Kaj says he felt “rather overwhelmed” with the request.

“We’re talking a huge drawing that had to really incorporate those original five panels from Dirk’s dad. It was intimidating,” said Kaj. “I finally landed on the idea to ask Dirk for any of his dad’s old notes or sketches and – fortunately – he had a pile of thumbnails and doodles on napkins,” said Kaj.

“Once I spent some time with his dad’s sketches, I suddenly had this moment when I could see the entire design in my head. I went right back up to my studio and drew the whole thing in just a couple of hours. When I called Dirk to tell him I had it done, he didn’t even believe me,” said Kaj with a laugh. 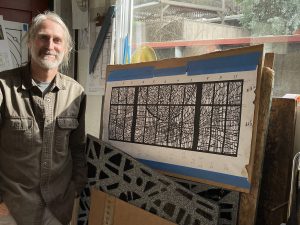 After immersing himself in Dirk’s dad’s notes, Kaj Garmshausen sketched the entire panel in a couple hours.

“I drove over to show it to Dirk and we knew we had it. And then, I got to fill in all the colors so that we could present it to Pastor Philip (Smith) at the church. As soon as we unrolled it to show it to him, he knew we had it, too. It was such a great moment,” said Kaj.

Then, the real work began … finding and ordering all the thousands of thick colored glass blocks from just three remaining Dalle de Verre glass blowing studios in the world.

“We started with the original five panels that Dirk’s dad had created, but we discovered that the glass he used was unattainable; the colors just aren’t made anymore,” said Kaj. “So, it became a real process to create something that flowed with those original colors but acted as a close complement, too.”

Meanwhile, the glass-blowing studios in West Virginia, Germany and Kokomo, Indiana were dealing with COVID shutdowns and supply chain issues of their own. “Most of the time of this project has been spent waiting around for the glass to arrive,” said Dirk. “It delayed us by about six months.” 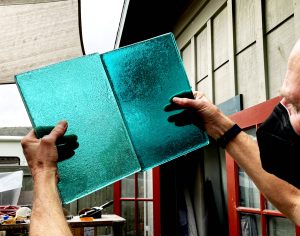 Dirk compares slabs of “teal,” each of which has its place in the “Creation” story.

While he waited, Dirk meticulously removed the glass from his dad’s original panels and recast their exact configuration in stronger epoxy. Then, he and Kaj printed Kaj’s original artwork at full size and began “paint by numbering” the entire matrix as a key for the incoming 3,000 pieces of glass. Kaj became a willing apprentice as Dirk began teaching him the 90-year-old technique.

As the glass began to arrive, the two would, for example, discuss 12 different shades of yellow to determine which went where. And, they would ask the originators to try “a second round of teal that looked more like seafoamy teal,” noted Dirk.

“You can’t just say, ‘Oh, this will work well enough,’ and put something in that really doesn’t belong to the ripple of color gradation you’re creating,” said Dirk. “It’s just got to be the right glass for that right space,” he finished. 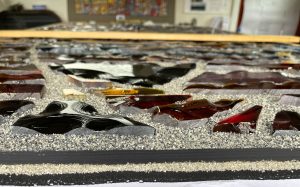 Once chiseled to their proper shape, the glass is secured in an epoxy mix of sand and rein that requires more than 24 hours at just the right heat to harden to a steel-like substance.

“This is “The Creation,” man! You’ve got to get it right on the first pass,” added Kaj.

Once selected for their place in history, the glass pieces are carefully chiseled and hammered into their appropriate shapes. They are then laid on a bed of sand that is bound by a wooden casting frame. A matrix material of sand and epoxy resin is carefully poured between the glass pieces, requiring at least 24 hours to harden.

Waiting for the light

Beginning on March 21st and extending through the end of the month, Dirk, Kaj and their team will begin the actual installation at the church.

Until then, 22 panels, stacked shoulder to shoulder in Dirk’s small studio, yearn for the day when they will become one with the light.

Dirk Maes owns Maes Stained Glass at 2621 Laguna Canyon Rd, Laguna Beach, CA. His phone is (949) 394-5934. He regularly creates and updates stained glass projects for homeowners as well as for churches, cathedrals and retailers. See his award-winning work at MaesStainedGlass.com

Kaj Garmshausen is a master artisan, wood sculptor, peacekeeper and lover of nature. It’s best to message Kaj at his Facebook page.