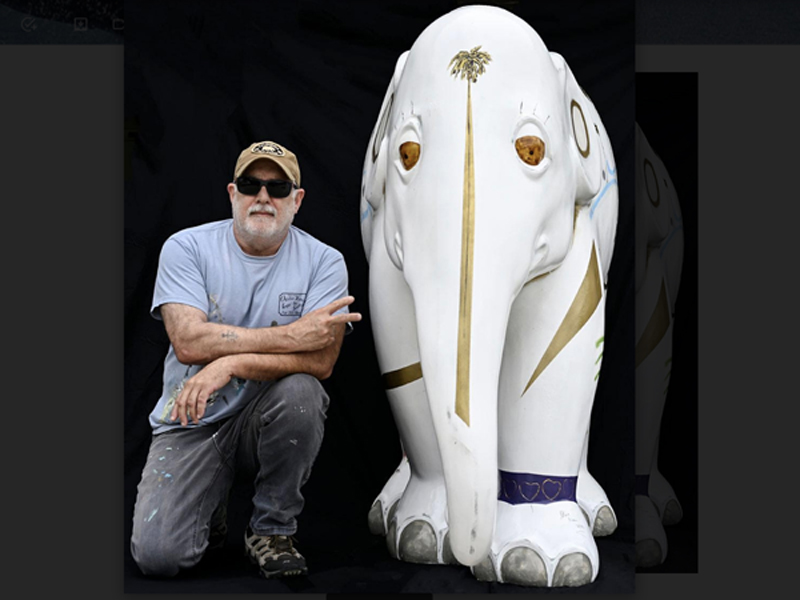 You might say that local Laguna Beach artist Steve Adam has had an elephant-sized year.

Several months ago, he was chosen by none other than L.A. Rams owner Stanley Kroenke as the “branding artist” for the spectacular SoFi stadium. Steve has since splashed his signature work everywhere, from walls to restaurant coasters. His work is prominent in the large art gallery on site, too.

And now, one of the baby elephant statues in the just-arrived Elephant Parade® also bears Steve’s signature palms and splashes of color.

“It’s definitely a one-of-a-kind of honor to be chosen as one of the artists for the Parade,” he said. “Who knew I’d wake up one day and paint an elephant?

The elephant, named “Cali” by Adam, is one of 25 baby elephant statues ambling once again throughout Dana Point. The outdoor California Dreamin’ exhibition began Oct. 8th and runs through Nov. 26th, the day after Thanksgiving. Cali is hanging out near the Timeless Teak furniture store on Del Prado (the old Lantern District).

As I took myself to lunch the other day, I came across three other elephants – one lounging across from Stillwater Restaurant, another in the median just east of Bonjour Café and a third gleaming, golden beauty with a heartbreaking message at the crest of Heritage Park. They are literally everywhere. 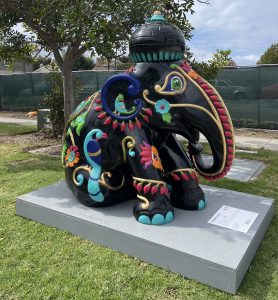 Elephants are roaming again in Dana Point through Nov. 26th.

If you remember noticing an elephant in the room from years past, you’re not imagining things. In 2013, Dana Point was the first North American city to host the Elephant Parade®, drawing more than 250,000 visitors who wandered the town with elephant map in hand.

The majority of those statues were purchased by resorts, businesses and lucky homeowners throughout the Orange County and L.A. Basins.

It’s All About Saving the Lives of Elephants

The Parade originated from a father-son team. While vacationing in Thailand in 2006, they met a baby elephant that changed the course of their lives. Mosha had lost half her front leg to a land mine and was the first elephant in the world to be fitted with a prosthetic leg. (The leg has to be replaced every year because she’s still rapidly growing.)

The gentlemen were so moved by her dignity and spirit that they came up with the idea of an international Elephant Parade, asking renowned artists and celebrities to paint life-size baby elephant statues that then “go on world tour” to raise awareness for elephant conservation. 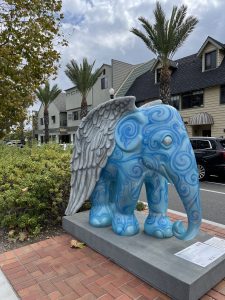 Mosha’s home base in Lampang Thailand was the first to receive generous contributions from the original Parade, which took place in the Netherlands in 2007. The first tour proved so popular that it has simply grown to elephant-like proportions.

While the original art elephant statues continue to be auctioned to caring homes and businesses at the end of each exhibition, their replicas are also sold in various merchandise forms at the website, ElephantParade.com

“For Me, This Was a No-Brainer”

Steve Adam said he was delighted to take on the project because he already donates regularly to wildlife conservation. “Cali felt like the perfect name and inspiration for this elephant,” Steve said. “I wanted Cali to have a light and joyful feel that evokes a spirit of celebration and enlightenment.”

“The SOS on Cali’s hind leg stands for “Save Our Souls” and represents my concern for critically endangered animals. I believe that by saving the animals, we save ourselves,” he added. 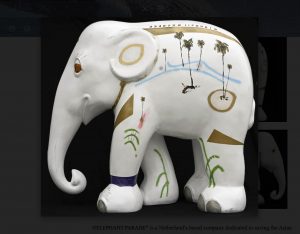 To put in a bid for Cali or any of the other California Dreamin’ elephants, go to: ElephantParade.com/parades/dana-point-2021.

You’ll find Steve Adam regularly in residence at his gallery just south of the Ralph’s parking lot (right next to the British Hair Company) at 760 South Coast Highway, Laguna Beach.