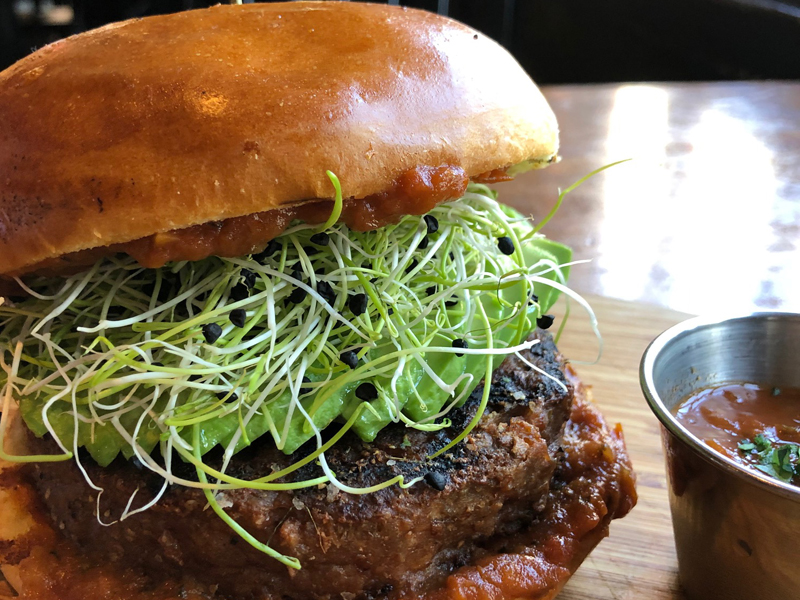 Over many years, the Lumberyard Signature Burger has never budged from my annual “Top 5 Burgers of Laguna Beach,” and it’s always been a best-seller on Cary Redfearn’s menu.

Over the last few months, though, the LYard champ is being challenged by a come-upper from its own ranks: The Lumberyard Beyond Burger.

The Beyond Burger, a plant-based burger largely made of pea protein, is the first of its kind in Laguna Beach. In fact, you might call restaurateur Redfearn a trend setter as McDonald’s just got around to announcing last Thursday that it will begin serving the “PLT” – a Beyond plant-based burger with lettuce and tomato – in Canada. The announcement caused Beyond’s stock to shoot up from $138 to $154 a share in mere hours. The Beyond Burger is also being served in Carl’s Jr. locations to rave reviews. 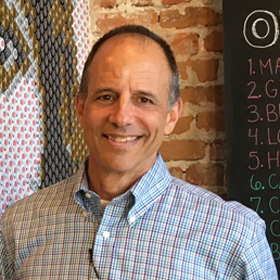 “I just knew this day was coming,” said Cary. “There are too many issues out there with the sustainability and emissions of raising beef, but no one who loves beef wants to give up that great taste.”

Unlike vegetarian burgers, the Beyond burger is made of pea protein with a phenomenal likeness to a perfectly grilled beef burger

Unbeknownst to me and until my interview with Cary last week, the Beyond burger is not a vegetarian burger, which is usually made of assorted chickpeas, beans, potatoes and/or vegetables. The Beyond burger is, instead, a carefully engineered gluten-free, soy-free and non-GMO solution that ranks in equal calories to a burger patty but provides as much protein and iron with less fat and saturated fat.

More important to me (the Foodie Queen) is that this burger looks, smells and tastes like a true-blue grilled hamburger.

At first, I was the Doubting Thomas, I’ve got to admit.

But, when Cary is excited about a food product, he’s absolutely compelling. His passion for great food makes Cary one of only two guys I know who could talk me into eating the stuff I typically label “weird.” (The other guy is my long-time Michelin-starred client, Joe Marsco, in Las Vegas. He’s the only person in the world who finally managed to talk me into eating frog’s legs and foie gras.)

When Cary tells me to get in my car and break every speed limit to reach a certain hole in the wall in Los Angeles, I follow through like an obedient food zombie. He has never steered me wrong.

When his chef produced the Lumberyard Beyond Burger at my table, Cary snatched it and cut it into squares for me, just like my Dad used to lovingly do with my peanut butter and butter sandwiches. How can you not love something that an authoritative figure so adores? 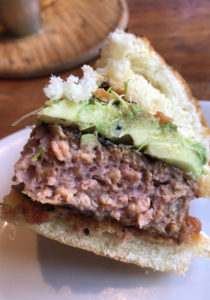 On the taste test, I had to admit: Cary was right again. This “burger” is truly an anomaly. It’s that meat alternative that’s alternatively great.

On the chew factor, it’s a little more dense than your common burger patty. It’s more like biting into a ground sirloin burger. Its taste, though, is so closely matched to a backyard grill burger that you can’t even discern where the scientists at Beyond Burger tried to get it right. (I would have loved to have been a fly on that wall.) The Lumberyard serves it with a slather of tomato marmalade to keep the patty juicy, but I don’t detect the normal patty dryness that I’ve tasted in other “almost-beef” products. It even looks like a medium rare burger, compliments of a dash of beet juice in the manufacture.

As more consumers grow more health and environmentally conscious, consumption of plant-based foods continues to rise. The Beyond Burger was first to take the scene in 2009. In 2011, the Impossible Burger began popping up in every possible location, too, but its soy base has proven a slight detriment to the Beyond Burger solution.

While the two newbies have struggled with the meteoric rise of success (management row of each entity has sent its heads of state to feverishly work in the refrigerated warehouses to help meet demand), the world’s largest food conglomerate, Nestlé, is looking to move into this market in a very big – and organized, grandpappy – way.

Nestlé has the ability to flood multiple markets in a nano-second, having survived those adolescent days of growth back in about 1920.

Just recently, Nestle´, announced that it will be launching the Awesome Burger in the U.S. in various grocery chains after spectacularly selling a similar product under its Garden Gourmet brand in Europe. It also plans to launch a giant line of plant-based deli meats for deli counters and grocery shelves.

“I think it’s a great and conscientious trend overall,” said Cary. “We’ve begun to expand Beyond, if you will, to sausage links here at Lumberyard and in crumbled sausage for our pizzas at Slice.  For us, it’s the tastiest solution, and our patrons are beginning to notice. I know that I’m finally on the cutting edge of something that will only become bigger in demand. But, what’s most important is that I like what I’m doing to help the long-term solution of sustainability.”

Lumberyard Laguna Beach is at 384 Forest, actually on the corner of Forest and Forest, just across from City Hall.