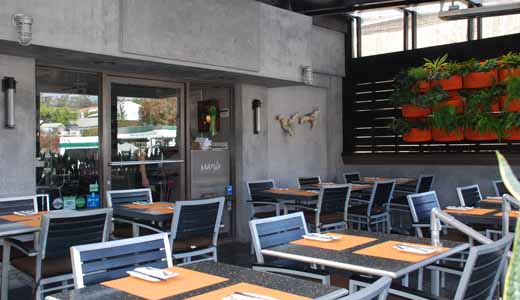 If any of you are familiar with the term “Mercury in retrograde,” you’ll understand why the espresso machine broke down at Maro Wood Grill on Tuesday.

When I arrived on Tuesday to chat with Mariano “Maro” Molteni and his Chef, Debra Sims, Maro was up to his elbows in coffee grounds as he tinkered with the dratted machine.

When I showed up to take photos the following day, a smelly asphalt truck at a nearby business was pluming its asphalt smoke directly into Maro’s patio. I found the entire restaurant crew huddled inside with every door and window closed, and Chef Debra talking sternly to whipped cream that was melting too quickly for our photos in the closed quarters.

Whatever the planetary skew or whipped cream mishap, though, Maro and Debra are endlessly cheery and vibrant. She’s trying new menu recipes. He’s planning a lamb grilling event on Saturday. As well-suited business partners, they love running one of the most successful restaurant “secrets” in town. And, with all the Maro Wood Grill menu items organic and sustainable, the delicious fare is only more appreciated by the restaurant’s throngs of fans.

A year prior, Chef Debra would never have imagined herself in this small, South Laguna restaurant. A graduate of Le Cordon Bleu a few years prior, she had settled as a chef in Hollywood and Studio City, creating everything from flaky pastries to Baba ghanoush.

As 2010 came to a close, a friend told her about a restaurateur looking for a chef, and suggested that Debra come to their New Year’s Eve party to meet him. “The first time I saw Maro, he had on this big white wig and was kind of a crazy man at the grill, and I thought, ‘THIS is the guy who wants a chef? You’ve got to be kidding me.”

Two weeks later, she was working for him.

In the eight months that ensued between construction and Opening Day in September 2011, Debra had plenty of time to formulate an Argentinian-based menu.

“The problem with Argentinian, wood-grilled food is that there are just so many options,” says Chef. “The food is so clean and so good,  you just can’t stop at a single menu.”

So, she doesn’t. Every single week,  Chef Debra creates at least three or four new menus, and posts them on the MaroWoodGrill.com website almost every morning.

Initially, Chef Debra started with prix fixe menus on certain days of the week, and you will still find that theme in her “Supper Specials” on Friday and Saturday nights. (This week, the Supper Special is Grass-fed Baseball Steak with Roasted Potatoes, Mesquite Blue Lake Beans and Coconut Pecan Ice Cream Sandwiches.)

“I try to get the Supper Specials changed on Sunday so that people have a week to read about it and look forward to it,” she says.

“The other nights of the week, I just change it up, based on new ideas and the fresh produce and protein we have coming in that day,” she continues. “We want this to be the freshest food experience, and that really requires daily attention to our menu offerings.”

And then, of course, the 29th of every month is reserved for Gnocchi Night. “It’s a real crowd pleaser,” she says with a grin. “The flavor changes every month, depending on the seasonal vegetable I have available.”

Given the restaurant’s cozy square footage (9 people inside, 30 outside), it’s no surprise that this restaurant fills regularly with reservations, especially on the weekends. “Our mid-week nights are busy, too, but people can usually get in without too much trouble, says Debra. “And our winters are nice because we see so many of our regular locals.”

Despite Chef Debra’s penchant for change, there are tried-and-true favorites that will never be removed. Were she to remove the Maro Wood Grill Burger from the menu, for instance, crowd riots could ensue. The burger is the restaurant’s best seller at lunch and dinner. 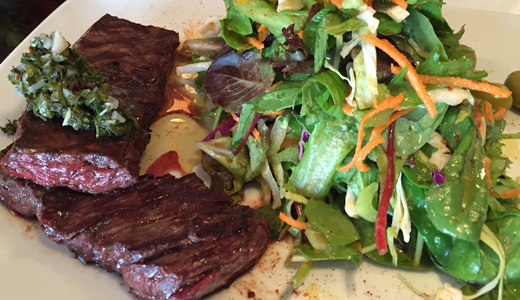 Another crowd favorite is the Grass-Fed Skirt Steak, a resident on the Maro Wood Grill menu since the restaurant’s first day of business.

Now, normally when it comes to skirt steak, cooks and chefs know it has a tendency to be a bit chewy or tough, but Chef Debra’s is a melt-in-your-mouth experience. “It’s a happy cow,” says Chef Debra with a shrug. “Grass-fed beef is the healthiest, smartest choice in beef because it’s how they’re naturally raised.

The skirt steak arrives with a cheeky portion of chimichurri, which I’m initially reluctant to try because the steak is so darned good on its own. The chimichurri, though, adds a perfect accompaniment, as it’s made of parsley, garlic, red onions, rice vinegar, red wine vinegar, canola oil, crushed red pepper and salmuera (a salt and water combination).

So New, It Doesn’t Have a Name

This week, Debra is working on a new beet salad dish. It doesn’t have a name yet, but it’s already won a place on the menu, this I can assure you. 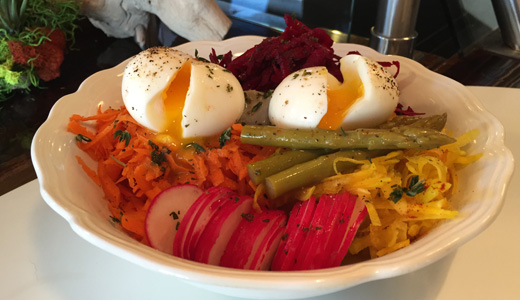 Grilled and shredded red and gold beets join shredded carrots and radish. She’s added her house-cured artichoke hearts, but thinks something is still amiss, so her house-cured asparagus spears are the next addition. She tastes it and nods approval. “They have just the right amount of cumin to bring up the flavors of the entire dish,” she says.

Atop the pile of salad, she adds two organic (Laguna Beach grown) 4-minute eggs, then drizzles her Lemon Thyme Vinaigrette as the crowning touch.

At first I think that it’s impossible for one person to finish this enormous salad single-handedly, but it’s terribly hard to stop eating it. It’s sure to be a hit with the Maro Wood Grill crowd.

“It’s earthy and crispy and sweet with a little bit of tang,” says Chef. “And the eggs add this great richness to the dish.”

Yep. This no-name beet salad is a definite keeper.

Save Room for Dessert 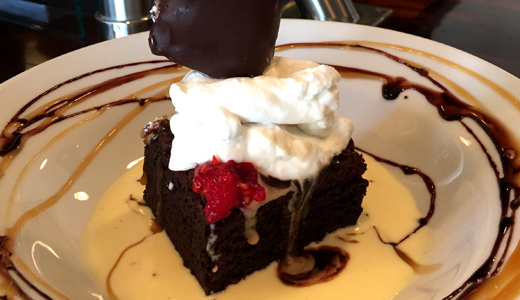 You can’t blame the Golden Foodie judges, as it’s quite impossible to choose a clear favorite from Debra’s three entries this year – the bread pudding, inventive ice cream sandwiches and the Dark Horse dessert.

I have no idea how long Maro Wood Grill has been open for lunch, and I’m embarrassed to ask. My best friend, Lisa, suggested it a couple weeks ago, and I was surprised at the extent of the menu. At that time, Lisa and I shared all 4 of Debra’s empanadas (mushroom, spinach, spicy chicken and beef) with fresh side salads. On their newly expanded patio, it was a perfect afternoon treat and an unexpected find. 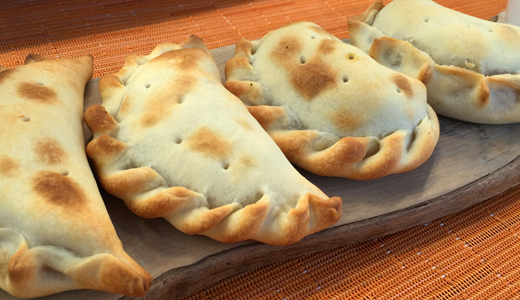 Chef Debra figures at least 97% of her audience is made up of local Laguna Beach residents, all of whom keep returning for more. And that’s the delight of Maro Wood Grill – it’s an unexpected find every single time you visit.