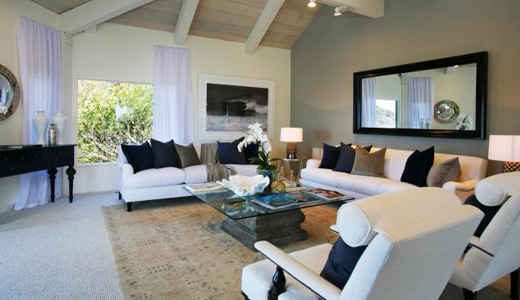 Now, I know that here in Laguna Beach, many home sellers will hire “stagers” to come into their home to create a more amenable look for incoming buyers. But last week, when I saw an enormous truck for Meredith Baer Home in the Albertson’s parking lot, my curiosity was piqued.

Meredith Baer is THE Staging Queen. Period. Seeing her truck in our Albertson’s parking lot was like a celebrity siting for me.

Fact is … I’m a closet HGTV freak. Even while I’m tapping on my computer, I’ll have my muted TV tuned to HGTV. Baer was part of a recent mini-series on the HGTV show,Staged to Perfection, and her team was impressive, to say the least. This woman has 20 designers and a 600,000-square-foot warehouse of décor. For me, this is headier knowledge than discovering that Santa creates all his toys in the North Pole. I don’t even do staging or know anyone who does, but the show held my rapt attention as her team transformed homes for sale into décor wonderlands.

As it turns out, last week was Baer’s first foray into Laguna Beach – South Laguna Beach, to be specific. Her organization was hired by Realtor Susan Helton to work its magic on a $2.4 million listing at 22165 Paseo Del Sur. Apparently, Susan Helton is an avid fan of Meredith Baer, too, and she somehow managed to talk them out of their roost in Santa Monica to fly south for a day. (The open house info is below – it’s this weekend, April 12th and 13th.) 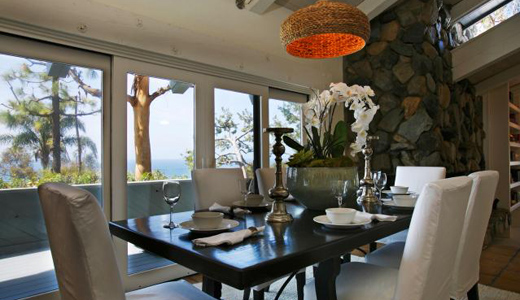 As the story goes, Meredith Baer’s first representative, Mary Langley Treisman, visited the home and met with Susan Helton and the owner. Before she’d even left the house, she knew just which designer she was going to bring in – Alex Ventura.

Alex showed up a couple days later, roamed room to room without even a notebook, and returned a week later with an enormous truck trundling behind her. The team removed furniture, built-in desks and bookcases and even a grand piano and, in a single day’s time, created a beautiful flow through the entire home in a “Coastal Transitional” decor style.

It’s a rare treat to have this level of staging performed in Laguna Beach. Susan has two open houses at the above address this Saturday and Sunday, April 12th and 13th, from 1:00 – 4:00 p.m., if you want to stop in for a peek. Even if you aren’t looking to buy a home, you might know of someone who would . . . and, oddly enough, many buyers who walk into a Meredith Baer Home buy all the staging, too. Gee, what a surprise.