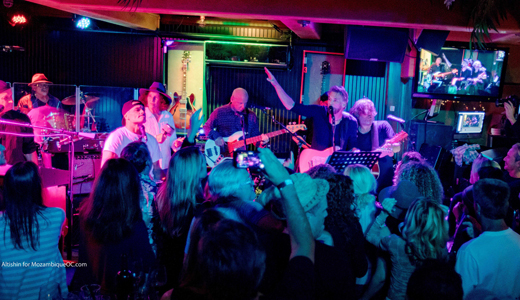 Kenny Loggins is just one of many national and regional acts gracing the stages of Mozambique.
photo credit: Mike Altishin

This Tuesday, Jan. 10th at exactly 5:15 p.m., Mozambique Steakhouse re-opens after a required 5-day suspension levied by the Alcoholic Beverage Control board (ABC).

Owner Ivan Spiers will be celebrating the occasion with his usual forward-thinking aplomb by inviting the Laguna Beach community of friends and supporters to an hour-long party of free appetizers and drinks.

“Sometimes, when you find yourself under fire because of one or two people in this town, the best thing to do is focus, instead, on all the hundreds of people who support and encourage you to keep doing what you do for Laguna Beach,” says Spiers.

“I’m looking forward to a lot of people being there when we tear those closure signs down on Tuesday,” he says.

Stop All That Dancing!

When his restaurant is allowed to re-open on Tuesday evening, Spiers will assuredly be pleased. The forced closure, though, has been a significant slap that Spiers says is not only discouraging but “viciously opposed” to what should be a supportive business environment for entrepreneurs in Laguna Beach and the many talented musicians who deserve a live stage showcase.

Although Mozambique has been in successful operation for 11 years with no ABC violations, Spiers just began wrangling with ABC conditions of use (CUP) penalties in 2015 based on complaints from two residents. These penalties have nothing to do with what would be considered ABC’s wheelhouse – Mozambique has never been penalized for serving under-age teenagers, over-serving its patrons, or even serving alcohol beyond its timely limits. The ABC has, instead, zeroed in on two agendas:

In the violation notification, Spiers learned – for the first time – that the ABC conditions were out of sync with his conditional compliance with the City.

“ABC is focusing on technical aspects of Mozambique’s permit and what they’re honing in on is not at all in parallel with the City’s own permitted conditions for Mozambique,” says Larry Nokes, Chamber of Commerce President and attorney for Spiers.

“So,” continues Nokes, “While the City of Laguna Beach has allowed dancing at Mozambique and also monitors the restaurant several times a year to ensure that its noise is no louder than surrounding ambient sound, the City’s support and approval of Mozambique has fallen on deaf ears at the ABC.”

Spiers asked to apply for a revised CUP but was refused the application until he pled guilty to the allegations and paid the ABC fine. Once paid, Spiers was allowed to file a new application for an updated CUP.

In the meantime – and in violation of Spiers’ pending application – the ABC recently levied another CUP penalty, this time about dancing in front of the live music stage. Spiers and Nokes fought the charges in court and the ABC settled with the stipulation that Mozambique serve a 5-day closure suspension.

“There are other live music venues in Laguna Beach that never undergo this kind of ongoing scrutiny from the ABC,” says Nokes.

“It’s very disheartening for Ivan, particularly considering that Mozambique is not only the largest restaurant employer in Laguna Beach, but hosts a number of civic and charitable events throughout the year, and has proven a significant source of tax revenue to the City.”

Loss of Wages, Loss of City Revenue
During the recent 5-day penalty closure, nearly 100 Mozambique employees and at least 40 musicians stayed at home. The City of Laguna Beach also lost in sales tax, which is a significant portion, given Mozambique’s daily business volume.

Says Anna Lee, Mozambique’s Controller, “Aside from the fact that our employees and contractors lose wages for themselves and their families, the surrounding businesses to Mozambique lose, too, because all of our people aren’t there to run up to the car wash or grab a coffee or stop in the nearest grocery store or drug store. There’s a trickle-down effect that, even over just 5 days, can be significant.”

A Phoenix Rises from the Flats

A successful restaurateur from South Africa, Spiers says he chose to put roots down in Laguna Beach because he admired its support of its artists and musicians.

“You can go anywhere in the world and rarely find a city that is so supportive of what is such a foundational aspect of any community,” says Spiers.

“I envisioned Mozambique as a fantastic dining and steakhouse experience that also served as a promotional cornerstone of the best national and regional musicians around. And, everything we’ve put together here … live music six nights a week … our singing competition on Tuesdays, Laguna Voice, that’s bringing in all this undiscovered talent from hundreds of miles away … our new jazz and blues piano lounge in our Durban Room … all of this honors why Laguna Beach began.”

Since the first day of renovation, Spiers has funneled at least $20 million into initial build-outs that included a new kitchen, 3 distinct dining rooms, a live music stage with an adjacent studio recording booth, and state-of-the-art audio and video in every dining room to accommodate social and corporate event needs.

In recent years, Spiers added the Veranda roof deck. Aside from offering pristine ocean and city views, it’s a quiet place where no live entertainment occurs. Installing the roof deck also managed to capture and contain any sound from the live music stage below.

And, more recently, Spiers reincarnated one of his existing banquet rooms into the Durban Room piano lounge. Even now, the Durban Room is undergoing a “nip and tuck” of its own with the introduction of blues and jazz greats in piano and solo artistry. And, Spiers hired nationally renowned Hollywood production designer Nelson Coates to personally craft a true bluesy vibe for the room; its debut planned a few weeks from now.

Support Of The Many

Spiers says that when he starts thinking of throwing in the towel, he turns his attention, instead, to creating “more” and “better” for his dining and music patrons.

“I just try to push the discouragement away and focus on creating the experience,” says Spiers.

He adds, “I tell myself that when my friend, Mark Christy, was first trying to renovate The Ranch, just one person created so much opposition for him. It’s so much stress – not just monetarily … which can be staggering … but for the people you’ve employed and the future people you want to create that experience for. But, Mark found his way to the other side. Just look at the support he received from the Laguna Beach residents and the beauty he ended up creating.

“That’s the spirit we’re going to be celebrating this Tuesday afternoon,” says Spiers.