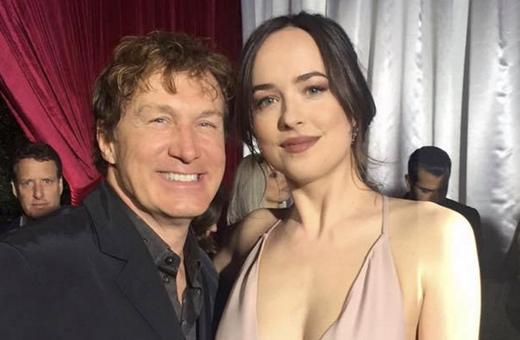 This past weekend, our own Laguna Beach’s Nelson Coates hit the bigger time. As one of the most in-demand Production Designers in Hollywood, Nelson has already been “big time” but this weekend, his star soared even higher. This guy works so hard, there can be no one more deserving.

Why the accolades? Because his latest movie, Fifty Shades Darker, scored as the 4th biggest opening ever for an R-rated film, behind Deadpool, The Matrix Revolutions and Star Wars: The Force Awakens. All told, Fifty Shades Darker scored a worldwide take of about $150 million.

More importantly, though, Fifty Shades Darker, the 2nd in the 3-part installment, is earning much higher critic and fan ratings than the first movie in the series, a direct correlation to the hiring of a new Director (James Foley, recently House of Cards) and a new Production Designer (Nelson).

As the Production Designer, Nelson Coates actually delivers quite a bit of direction to the Director of any film. Completely responsible for the visual concept of a film, Nelson identifies the design style and mood, the locations, all the sets, graphics, costumes, camera angles and more … even scrounging up and redecorating 120-foot yachts.

Last Thursday, Nelson and his partner, Ruben Flores, invited their closest group of friends to a 10:00 p.m. sneak premier at Laguna Niguel’s Cinépolis Theater. While I’ve not been the biggest fan of the Fifty Shades series, I wouldn’t have missed this event for the world … and I took one of my married girlfriends with me!

From Gray Grey to Multi-Faceted Grey

A couple weeks ago, Nelson and Ruben made a point of coming over to my house so that the three of us could watch the first rather dreary movie, Fifty Shades of Grey. This time, though, it was a fascinating excursion as Nelson talked about what he didn’t like here and didn’t like there, and all the many things … erhm … lacking in the look and feel of Christian Grey’s billionaire penthouse and lifestyle.

What a phenomenal gift it was to sit there and just observe the way Nelson Coates’ mind works. There couldn’t have been a better preview for me as I headed into the Thursday night movie, largely created by Nelson’s hand.

This time around, the movie was warm and engaging, and more filled with the admittedly glorious pomp and circumstance of a young billionaire’s lifestyle than the “red room” element that dominated the first movie (yawn). Even with all these warm and exciting trappings of wealth, these very surroundings infused the personality and story of the billionaire himself. In the first movie, he was hardly more than a cardboard cutout. In Nelson’s version, the billionaire comes to life.

“It’s just cool to get some national press on my design work. So many times, reviewers just pass over it or it gets edited out … months of intense work reduced to a blip,” he says with a smile.

As this publishes, Nelson is winging his way to Kuala Lumpur to begin work on yet another Hollywood movie.

Mozambique’s Own Durban Room in Production With Nelson, Too

Fortunately, Nelson Coates will still be sending last bits of design plans for the glorious re-make of yet another set, this time in Laguna Beach at Mozambique’s Durban Room. For the last few months, he’s been truly making the low-slung piano lounge and jazz club into a “speakeasy” kind of environment. While the Durban Room has remained open throughout Nelson’s personal – and almost daily – visits, its own “premier” will occur sometime in March or early April, Nelson thinks. Hopefully, Nelson will be able to find his way back to his hometown for the ensuing party and another round of accolades.

If you’re interested in attending the yet-undetermined premier weekend of parties and events for Mozambique’s Durban Room, just send me an email at Diane@LagunaBeachBest.