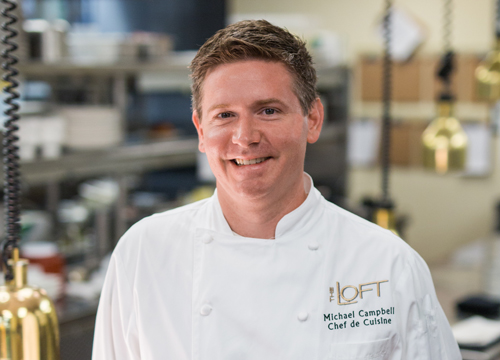 The Montage Laguna Beach announced yesterday that Chef Michael Campbell is the new Chef de Cuisine at The Loft restaurant. His extensive culinary experience in higher-level cuisine, coupled with a real love of Catalan-styled cuisine is sure to add significant and lively spice to The Loft.

Happily, we have not lost one of my favorite chefs in town, The Loft’s former Chef, Casey Overton. Chef Casey was recently promoted to Executive Sous Chef for all culinary operations within the Montage Laguna Beach resort, a promotion richly deserved for such a fantastic talent. It was was this very promotion that opened a rare door for Chef Michael Campbell.

While Chef Campbell might, at first glance, look like a young kid, he’s devoted more than 20 years to his craft.

He began his career at Wildwood Restaurant in Portland, Oregon, a well-loved watering hole for great steaks, seafoods and pastas under the innovative touch of Chef Cory Schreiber. To this day, Schreiber is still considered one of the pathfinders in Portland’s culinary scene, and Chef Campbell credits much of his love for the inventiveness of cooking to his most fortunate mentorship with Schreiber.

Chef Campbell chose to wander Europe from there, always in search of the most revered kitchens in France and Barcelona. While in Barcelona, he came to love the traditionally styled Catalan cuisine, a unique take on food preparation initiated in the region of Catalonia.

Inland from Barcelona by about an hour, Catalonia’s unique gastronomy relies heavily on pork sausage, mild goat cheese products, wild mushrooms (rampant in their forests), savory rices and sauces whose mouth-watering fried onion and garlic waft creates its own unique signature in every region of Spain.

Even Catalonia’s tableside bread is distinct – crispy toasted wafers simply rubbed with tomato, olive oil and salt. (I would sit in a Barcelona café with just the Catalan bread and a glass of Tempranillo and be wholly content.)

Chef Campbell also worked in Avignon, France’s renowned Numero 75 before returning to the United States to be swept up by Celebrity Chef Michael Mina for his flagship restaurant in San Francisco.

“I’m excited to join the team here,” says Campbell. “The Loft is known for its creativity, and I look forward to furthering the welcoming culture and incredible dining experience here.”

For me, I’m just hoping to sniff that signature Catalan sauce from my home just down the road from the Montage. Welcome to our town, Chef Campbell.