New Chef at Skyloft Turning up the “Haute” 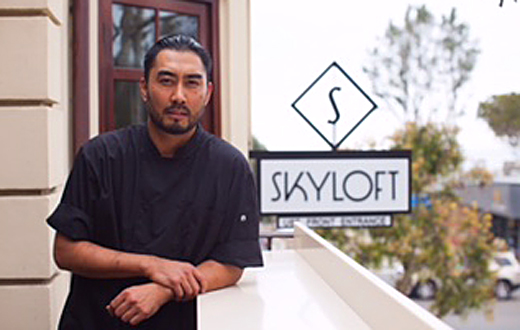 The new Chef at Skyloft Restaurant – Chef Arthur Ortiz – can definitely throw down one of the meanest briskets around, but that’s not all he’s revamping and introducing in his new Skyloft kitchen.

This man can seriously cook.

Toronto native Chef Arthur Ortiz began his culinary career at the Yard House, discovering along the way that the generous culinary contribution from our southerly United States – glorious smoked ribs, fish, jambalayas and more – was a gift this Canadian simply had to explore.

He learned all about the art of the “smoke” at Mammoth’s renowned Smokeyard BBQ & Chop Shop, and then began upping his game with a jaunt to the haute diner of Chicago’s West End, AuCheval.

Believe it or not, I’ve been to AuCheval and I still remember that amazing dinner. These folks serve up a “diner” menu that dosey-does between honey fried chicken and foie gras terrine (they’ll even scramble your eggs with foie gras). Try griddle bratwurst with heavenly smashed potatoes or try the roasted bone marrow, instead … AuCheval is haute, indeed.

And, after just a few weeks in play at Skyloft Restaurant, Chef Ortiz is definitely thinking on the “haute-r” side of life. While he’s improving upon the BBQ staples that Skyloft first set its sights on, Chef Ortiz is introducing new flavors and fresh zest to a 16-ounce cut Ribeye in a Cajun dry rub (with a mere side of mushroom etoufée), a Black Cherry Glazed Salmon, Jumbo Lime Shrimp Pasta, and kale and chopped salads that take you on an entirely new spin.

I knew Skyloft had it in them.

Our Toronto native has traveled miles down the dusty trail to find his way here, but I think he’s going to find a welcome and long-lasting home here in Laguna’s “haute-r” culinary world.