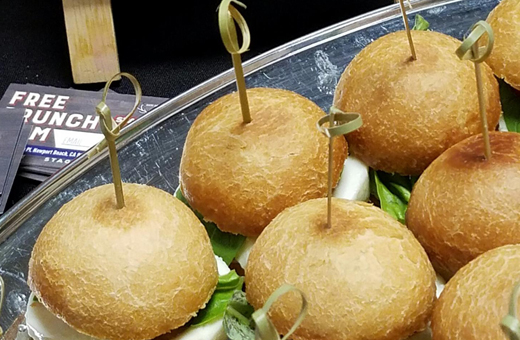 Last Thursday, I had the terrible job of attending the kickoff party to the Newport Beach Restaurant Week. Poor me. In fact, it was such a terrible job that I had to drag one of my girlfriends along with me. Poor us, sipping champagne, chatting with chefs and grazing among at least 12 restaurant food stations of foodie greatness.

Newport Beach Restaurant Week is currently underway, from Jan 16 – Jan 29, with 68 restaurants participating. You can find all the menus and info at http://DineNB.com

The kickoff event took place at Newport Peninsula’s new event center, Marina Park (swank!), and welcomed at least 50 people like me … you know, foodie-centric fanatics. It was a great opportunity to chat with a few chefs outside my usual city bounds.

As I noted in a previous column, one of my first stops will be Chef Brian Haskey’s Tackle Box in CDM. It turns out that this Top Chef finalist actually took over the concessions stand there on Big Corona Beach, essentially converting it into a gourmet food truck without wheels.

Haskey told me that he spent many years in L.A. and earned plenty of awards for the fine dining restaurants he represented, but that he wanted to create a “smaller, more responsive menu that could keep him ‘top of mind’ with the foodie public for years on end.” The concept seems to be working gloriously as the little place is stuffed with diners on a daily basis.

Another Chef, Max Schultz of the Sessions West Coast Deli, told me he was a successful practicing attorney but finally succumbed to his real passion – food – and has never looked back. As a longtime resident and ocean-loving spirit, he decided to create the kind of deli he had always been searching for on the Peninsula as a starving kid after long sessions on the water. 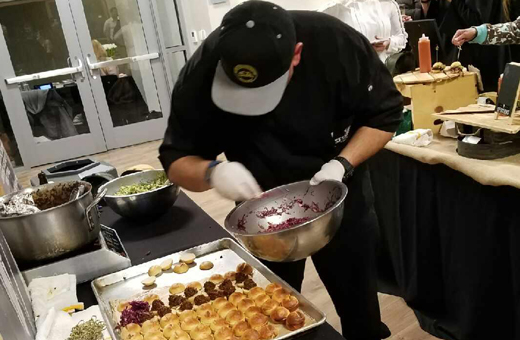 Unlike other sandwich shops, Sessions West Coast is a scratch kitchen, meaning everything from sauces to salad dressings, soups, sides and desserts are made from scratch daily. Every sandwich is made to order with fresh, locally grown produce and naturally raised meats, but even that description does not give credit for the kind of gourmet innovation this guy turns out.

I’ve also made plans to visit Ritz Prime Seafood in Newport Beach. Executive Chef George Neyra might be a bit reticent and shy but he’s exactly the opposite when he’s innovating his menu. I met Chef Neyra over a year ago at another food festival, and have sought him out at every festival since – his food is that good.

A Sizable Success in the Dead of Winter

We milled from table to table, trying everything from flash fried cauliflower in buffalo hot sauce to turkey meatballs in crazy good white sauce.

Having covered the restaurant scene here in Laguna Beach since 2007, I can assure you that our restaurants walk a tenuous tightrope in our winter season. And, in rainy seasons, we’re discovering the tightrope gets even skinnier – perhaps even a little scarier – for our restaurateurs and chefs. A few of the Newport chefs I talked with last week noted that our “seasonality” here in Laguna is more drastic in nature than what they experience in Newport Beach, even on the summer-centric peninsulas that seem to go so quiet in the winter.

I know there are many residents here in Laguna who just want PEACE in the off-season months – I’m definitely one of them. Asking thousands to converge on our town might seem quite the opposite of a peaceful week in the off-season. In the end, though, I’m all about living, dining and shopping in Laguna Beach, and our support of our favorite restaurants here in Laguna is – honest to God – paramount to their survival. Further, Newport Beach offers up 68 of its 400 restaurants, about 17% of its total restaurant population. If Laguna restaurants were to participate in similar percentages, that’s really just 15-18 restaurants participating in the entire town. In other words, I don’t think we would be deluged in outsiders coming to town during that single week.

What are your thoughts on this? Feel free to email me at Diane@LagunaBeachBest.com and I’ll report back on the responding consensus.