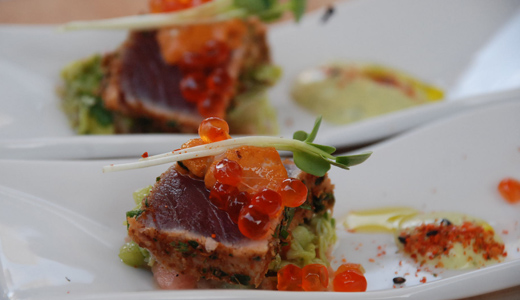 A month from now, Sept. 19-21, the very first Newport Beach Wine and Food Festival will premier at the Newport’s Civic Center.

Every time I mention this Festival, people immediately think I’m talking about the Taste of Newport, which, after its 24-year run, was cancelled by its sponsoring Newport Beach Chamber of Commerce citing financial and time tasking reasons.

This Festival – the Newport Beach Wine and Food Festival – is NOT the (now non-existent) Taste, but it promises to provide a much greater foodie experience.

Set to launch at a V.I.P. party at Red O on Friday, Sept. 19, the three-day event has invited 27 chefs of renown to provide great food and live cooking demonstrations through the weekend.

At the same time, seven sommeliers will be doing short, educative workshops and sitting on a blind tasting panel, while at least 21 notable wineries will be providing tastes of every color and vintage.

Tickets are already on sale at the festival website: www.NewportWineandFood.com with single-day passes for Saturday and Sunday at $195, and a weekend pass for $350. Net proceeds from the entire event go to three charity partners Project Hope Alliance and the Hoag Hospital Foundation.

Additionally, a separate Friday VIP ticket includes a decadent Friday kick-off cocktail party at Red O with a live and silent auction that fully benefits the charities. This VIPer is by invitation only, though. If you want to find a way to that invite list, email info@NewBeFest.com

Lastly, there will be a separate Sunday evening event, a grand finale party at Café Jardin in CDM with Executive Chef Pascal and various celebrity chefs popping in. Ticketing for that single event will arrive on the Festival’s website soon.

Celebrity Chefs From Across the U.S.

The 27-chef lineup reads like a “Who’s Who” of great chefs. 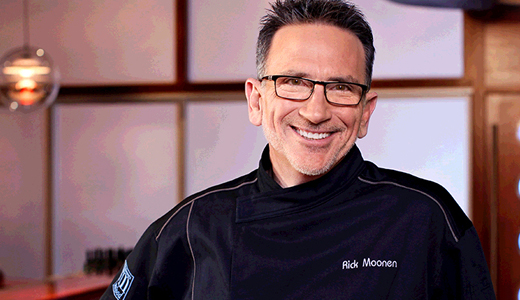 For starters, Celebrity Chef Rick Moonen (RM Seafood) will be alighting from Las Vegas. I’ve met and worked with Rick in Vegas circles and he is a fantastic, fun personality to have at any event.

Further, Bravo’s Top Chef Master Winner Chef Rick Bayless will be in attendance, too. His top-ranked Chicago restaurants Toplobampo, Xoco and Frontera Grill led to his opening the Red O restaurants in West Hollywood and Newport Beach in 2010 and 2013, respectively.

Bravo’s Top Chef All Star Richard Blais (owner of Juniper and Ivy restaurants), and Chef Sue Zemanick of the acclaimed New Orleans restaurant, Gautreu’s will also be part of the mix.

The list goes on and on with chefs of every possible cuisine and renown.

What excites me most, though, is the inclusion of six of our own Laguna Beach chefs at the Festival. Everyone knows that Laguna Beach is a culinary destination in Orange County, but I think we sometimes get lost in the P.R. mix of so many Orange County restaurants. Festival Founder Stefanie Salem and her team have afforded our chefs a lovely spotlight that they will – undoubtedly – fill in the three-day foodie extravaganza.

What Our Laguna Chefs Are Bringing To the Table

This last Monday, a few of our Laguna Beach chefs were at a media preview event to give lucky previewers a taste of things to come at September’s festival.

Chef Schwarz served up an exquisite dish, a Seared Tuna with avocado cream and fresh uni. 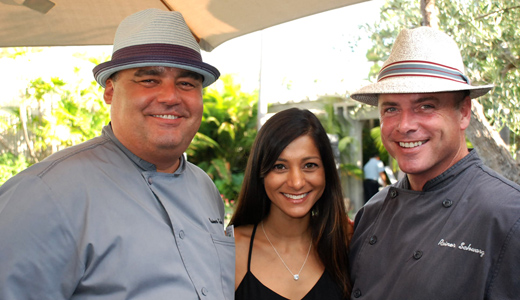 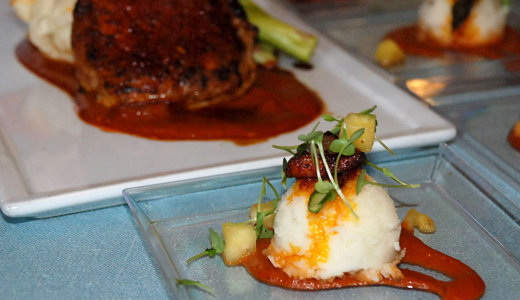 And, I ran into Chef Josh of Selanne’s, who will be featuring two dishes at the Newport Festival– a Lobster Salad with truffles and (one of Pastry Chef Heather’s decadent creations, no doubt) Spicy Bacon Caramel Corn.

“We like the fact that the Festival organizers have thought of including the Laguna Beach chefs,” said Chef Rainer when he had a free moment to chat.

“Laguna definitely provides a refined dining experience, and it’s a privilege to be a part of the event with so many really good chefs. I know that all of us are looking forward to introducing Laguna Beach to the attendees.”

The Newport Beach Wine and Food Festival doesn’t stop at 27 chefs. As I noted, 21 wineries will be participating in the Grand Tasting Pavillion and Grand Tasting Tiers throughout the event.

“We’ve really made an effort to bring in many great vintages,” says Joey Kleinhans, CSW, the owner of Wine Elite, which helped Festival organizers with the wine side.

“If, for some reason, the people don’t come for the food, they will definitely be coming for the wine,” says Kleinhans. “We have a number of extraordinary wineries stepping in, and attendees will get to experience old world and new world wines in one setting.”

Kleinhans has gathered at least seven sommeliers to not only provide educative tips, but also sit on a blind tasting panel in front of hundreds of attendees. Among the sommeliers being put to the test will be Troy Smith, AS, the Lead Sommelier and Beverage Manager for all three of the Montage resort’s restaurants, and Jesse Rodriguez, AS, also a Sommelier at the Montage.

I think Festival Founder Stefanie and her crew are on to something here. As foodies go, I believe most of us prefer smaller venues that give chefs an opportunity to really show off their cooking still while giving us more one-on-one time to chat with chefs and wine makers. Events that grow much larger than this seem to get a little out of hand. I, for one, am looking forward to this new “foodie tradition” in September!