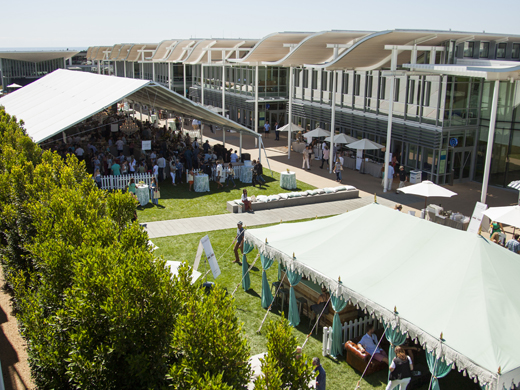 Just when you were feeling a bit boo-hooey about summer’s events fading into the setting sun, I bring you happy salvation: The Newport Beach Wine & Food Festival.

Granted, this event doesn’t occur until Oct. 2-4, but I’m getting the word out to you now for four reasons:

First, the inaugural event last year was the most impressive, high-level foodie festival I’ve attended on the Southern California coast. Hands down.

Second, tickets sold out for the Newport Beach Wine & Food Festival last year even before the event began – and this was a brand new event! The schedule alone, though, proved a phenomenal teaser, and the sellout success was worth the chance we all took.

Third, the organizers behind the Newport Beach Wine & Food Festival understood that it couldn’t be a foodie event without the inclusion of Laguna Beach’s most innovative chefs. This year, seven chefs from Laguna Beach will be joining the event, most of whom are returning for their second year.

Fourth, the organizers are letting me offer you a $50 discount on your ticket purchase! (More on this in a moment.) Tickets are online now at:  www.NewportWineandFood.com

Not Your Average Mob-of-People Food Festival

Last year, there was some confusion about what the Newport Beach Wine & Food Festival really was.

For years, the Newport Chamber had sponsored the Taste of Newport with hundreds of booths and live music stages on an outer ring of Fashion Island. While it was certainly impressive in size, it seemed more of a county fair to me. As the years wore on, few of the true chef greats of the area were in attendance, and the event became an exhausting production and expense for the Chamber. After the 2012 Taste, the Newport Chamber chose to stop the event – forever.

When the Newport Beach Wine & Food Festival began last year (2014), many readers thought it was the return of the Taste. Absolutely not. This is an entirely different event and the farthest cry from a “county fair” feel imaginable. 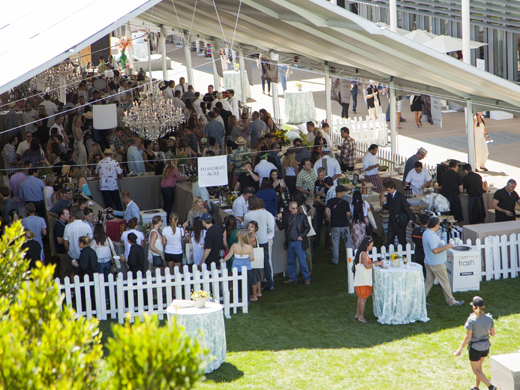 For starters, Newport Beach Wine & Food Festival Founder Stefanie Salem chose to limit food booths to just 30 of Orange County’s most renowned chef-driven restaurants. Then, she and her team created an entire pavilion of wine tasting booths. They launched the event with a luxe party and charity auction. They filled in the 2-day schedule with live cooking demonstrations from Bravo’s “Top Chef” personalities and wine seminars from master sommeliers. And, finally, they set up shop on the grounds of the stunning Newport Beach Civic Center.

All in all, it was a right move in every direction. And this year, it’s just getting better.

Seven of Laguna’s Top Chefs Will Be There 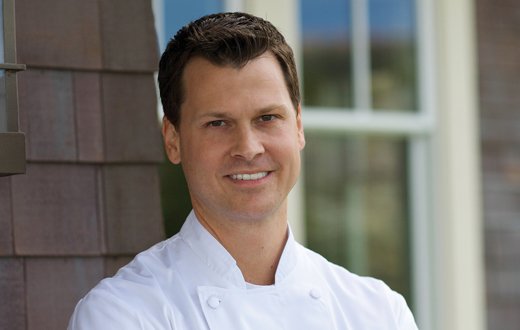 As I’ve noted, these chefs aren’t bothering with average food fare because it’s not what they do in their own restaurants here in Laguna Beach.

Joining Chef Craig from the Montage Laguna Beach will be Executive Chef Casey Overton from The Loft, and Montage Pastry Chef Lee Smith. 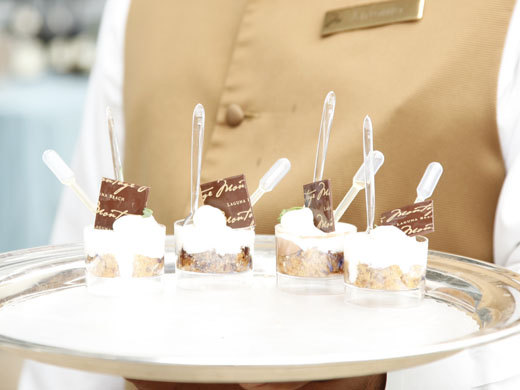 Selanne’s Chef Josh Severson is attending again. Chef Andrew Gruel from Slapfish will be (hopefully) showing off that awesome lobster roll he makes. Tommy Bahama’s Chef Jimmy Chang will be attending, too. And, Chef Rainer Schwarz of our Driftwood Kitchen and The Deck will be at the Newport Beach Wine & Food Festival, too.

“This year, I’m joining forces with Chef Yvon Goetz from The Winery Restaurant,” says Chef Rainer. “So, together, we’re doing a Roasted Porchetta Pork Roll sandwich on grilled country bread with a shaved fennel, arugula, pecorino toscano and pequillo pepper salad on the side.” 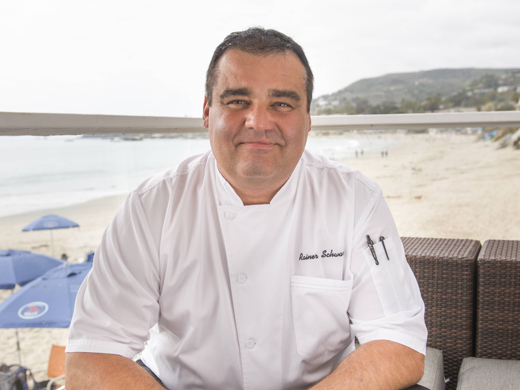 The two chefs will also be doing additional “signature treats” from their own restaurants.

“It’s exciting to be part of the second Newport Beach Wine & Food Festival,” adds Chef Rainer. “We’re definitely bringing the best of the best to share with our attendees.”

So, for instance, Chef Casey of the Loft and Chef Rainer will be part of Saturday’s lineup along with chefs from Oak Grill, Red O, Mastro’s, Pelican Grill and more.

On Sunday, for example, Laguna Chef Josh from Selanne and Chef Craig of Montage’s Studio will be joining 13 others from Del Frisco’s, Fig & Olive, Andrea at Pelican Hill, Stonehill Tavern and more.

Celebrity chefs from Bravo’s “Top Chef Masters” will be offering cooking demonstrations throughout the event. On Season 1 of Bravo’s “Top Chef Masters,” Rick Bayless and Hubert Keller duked it out in the final round with Bayless emerging the winner. On Saturday at the Newport Fest, they’ll be on stage – together – again with Keller preparing French cuisine and Bayless creating upscale Mexican.

On Sunday, Bravo’s “Top Chef” Rick Moonen (whom I’ve had the pleasure of working with in Las Vegas) will share cooking demo stages with a number of chefs. And, Bravo Finalist Chef Shirley Chung will be bringing people from the audience up on stage to compete for “Top Chef Home Cook” honors. 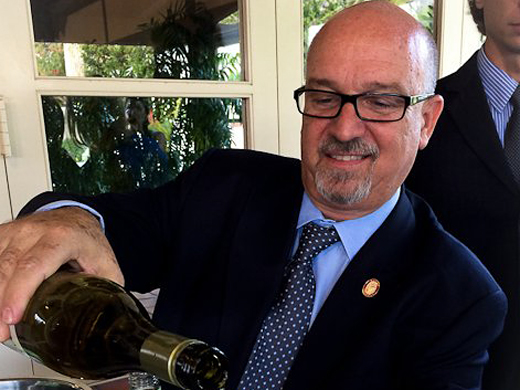 Not to be outdone by all that food, international favorite Master Sommelier Michael Jordan will be joining four other Master Sommeliers for wine seminars on both Saturday and Sunday. There are only 147 Master Sommeliers in North America, and 5 of them – Jordan with Fred Dame, Sure Lucero, Thomas Price and Emily Papich – will be guiding your nose through blind tasting tips and “Pinot Noir 101.”

Tickets & Our Own “Best of Laguna Beach” Coupon

So, you see now why I tell you this is the most impressive wine and food festival in Southern California? I had a fantastic time attending one day last year, and this year I’m already in for both days of the festival. There’s simply too much to taste, learn and enjoy.

Here’s the story on tickets:

Tickets for the Friday night Launch Party Oct. 2nd, are sold separately at $125 per.

Single day tickets for Saturday and Sunday, Oct. 3rd and 4th, are $150 per day. Receive a Best of Laguna Beach exclusive $50 off by inserting the code “BEST” on the right side by the pricing column when you order online here: http://www.newportwineandfood.com/tickets/ 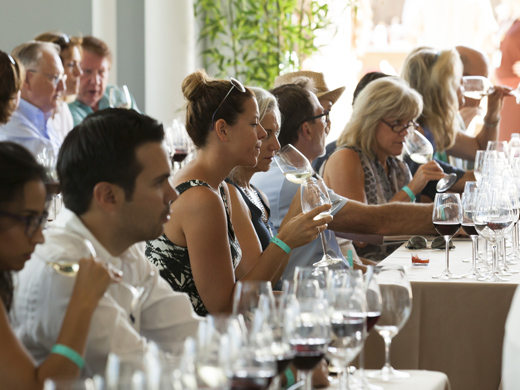 The wine tasting panels on Saturday and Sunday are included in the festival ticket price.

There is a special Reidel Wine Tasting Seminar on Sunday, which is priced separately at $75 and includes 4 tasting glasses from Reidel stemware. And, last but not least, Weekend Passes and VIP All-Inclusive Passes can be purchased, too. (Sorry, our “BEST” $50 discount cannot be applied to these.)

Purchase and tuck those tickets away now and you’ll be smiling for a month knowing you found a way to beat the end-of-summer blahs.

All details for the Festival: www.NewportWineandFood.com