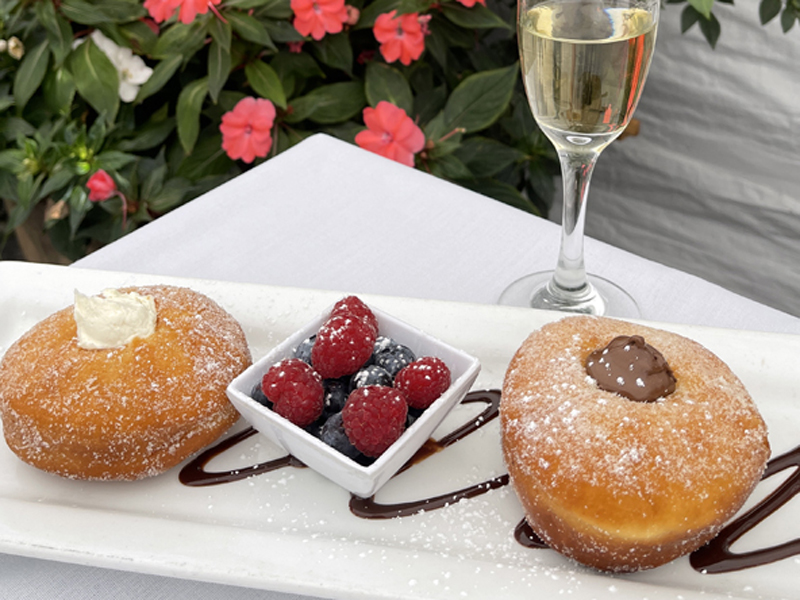 For several months now, Chef/Owner Erik De Marchi of Oliver’s Osteria has been serving up brunch on Saturdays and Sundays. I’ve been so intent on dining on his sumptuous food in the evenings, that I never got around to brunch until this past weekend.

Now I wonder how I lived without it all this time. 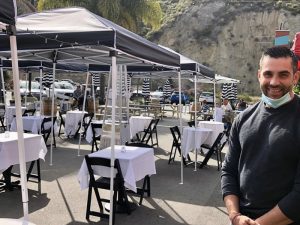 Chef Erik’s brunch menu is as imaginative and fun as his dinner menu, which recently won the Michelin Bib Gourmand, a rarely awarded designation for high-quality dining at a “reasonable price.”

Many months ago, my dear buddy, Ali, the Chef Concierge at Surf & Sand Resort, and I made a commitment to try at least one brunch venue each month. She’s always looking for great new things to share with her guests, and I’m always looking for more great food.

On Sunday, we met just a few minutes past noon, when Oliver’s was just opening for its weekend brunch. The outdoor patio tent was bright and quiet; live acoustic music drifted over from the Laguna Beach Beer Company while lively conversation drifted in from McClain Cellars on the opposite side. It was a sunny, happy place all around.

While the menu was certainly a surprise, the best surprise of the day was my reunion with one of my favorite servers of all time, Giovanni. 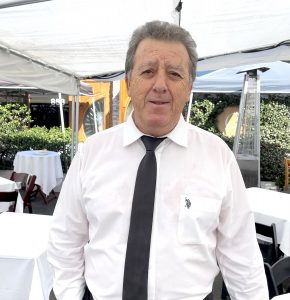 The longtime local favorite server from years past, Giovanni, has returned to Laguna Beach and taken up residence at Oliver’s Osteria.

Locals will remember Giovanni as the rock at Ristorante Rumari’s for years. He left shortly before that restaurant’s sale to Chris Keller to move back to England with his wife. After five long years, though, he’s back in Laguna Beach and in residence at Oliver’s. He didn’t miss a beat, even as the tables began to fill on our balmy Sunday.

Frankly, if those Michelin food reviewers were to try the very first item on Oliver’s brunch menu, they would award a Michelin star for that single item, the Bomboloni.

There’s a reason why these traditional Italian donuts start with the word “bomb.” When I was growing up, my Dad would occasionally bring home a dozen donuts from Mr. Donut for our Sunday nights with the Wonderful World of Disney. As much as I loved those jelly-stuffed donuts, Mr. Donut can’t hold a candle to Chef Erik’s house-made marvels. 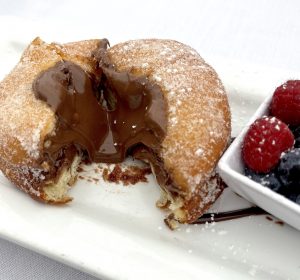 Rolled in fine grain sugar, these babies are stuffed to the brim with whipped, fluffy custard and goopy, heavenly chocolate. I felt like that kid, Augustus Gloop, who tried to drink from the chocolate river in Willy Wonka’s Chocolate Factory and decided to just fall in it instead.

Having first been served Chef Erik’s house-baked bread with fresh tomato salsa, we could have easily called it a day after the Bomboloni and waddled out of that tent. Giovanni, however, would have none of it.

Trying to regain some semblance of elegant adulthood, Ali ordered Frittatina E Caponata, a frittata baked with a jumble of vegetables – zucchini, onions and bell peppers.

I, however, figured I was already “down the river;” there was no salvation for me at this point. So, I opted for a dish I’ve never seen anywhere in my life – Eggs Benedict with Bolognese sauce.

A Mix of Sweet and Savory Brunch Items

While we waited for our dishes, we continued to peruse the menu, wondering what we might have missed. It’s a lovely mix with items such as Granola-covered Texas toast as Chef’s french toast entry, and a crepes dish filled with Nutella and mascarpone cheese. 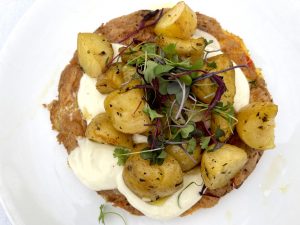 The Frittatina arrived as the whole frittata, a disc easily the size of a salad plate. Melty Mozzarella cheese served as the foundation to a rabble of herb-roasted potatoes and micro greens. Even in our 70-degree day, I could see steam tendrils lofting above the dish. This was most certainly just out of the oven. 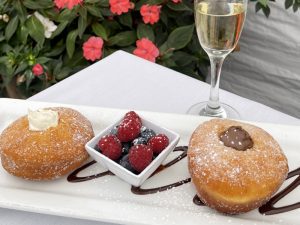 Then my dish arrived, and all momentary Frittata envy was swept aside. Somehow, Chef Erik has managed to combine two of my all-time favorite tastes – hollandaise drenched eggs benedict and old country Bolognese sauce – into one inspired dish.

Cut into the poached egg and watch as the yolk nestles its way into the crevices the meaty Bolognese provides. Carve your first bite, a layered wonderland of hollandaise, egg white, yolk, a taster of steamed spinach, Bolognese and wafer-thin buttery muffin serving as your fork’s landing pad. It’s a single bite that’s creamy, savory, salty and spicy all in one. 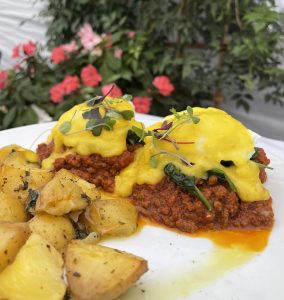 How have I never thought of making this dish before?

Wrapping It Up With Mascarpone

Of course, when you’ve come this far, what could possibly be wrong with adding a dessert, too?

Giovanni chose the Mascarpone ai fruitti di bosco, a simple layering of creamy mascarpone and raspberries. Creamy and not-to-sweet, the parfait was a perfect end. He added a candle, which I found to be a more than appropriate celebration of Chef Erik’s Weekend Brunch. 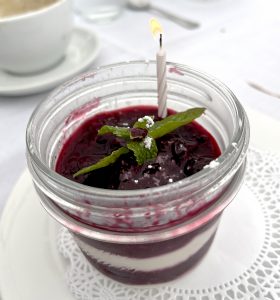 Oliver’s Osteria is in Laguna Canyon in “The Hive” next to Laguna Beach Beer Company and the Sawdust Festival, 853 Laguna Canyon Road. Brunch is available Saturday and Sunday from noon to 2 p.m. Reservation are recommended online at https://oliversosteria.com/reservations/