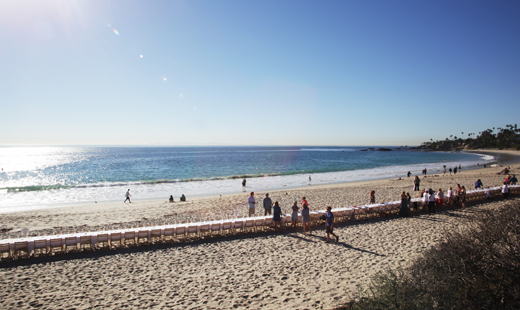 The innovative founder of Outstanding in the Field, Jim Denevan, is returning to Laguna Beach in November. He’s partnering once again with the Laguna Art Museum to produce one of his iconic dinners at one very, very, very long table to kick off the Museum’s Art & Nature festivities.

Two years ago, Denevan produced a huge beach mosaic and lit the entire design with solar lanterns. Later, in a Sunday conference, he laughingly admitted that he could hardly walk upright as his calves had taken a beating during his two-day-straight preparation in the sand.

A year ago, he returned to Laguna produce his famed dinner, seating more than 120 guests at one table on Hotel Laguna’s private beach. This year, he’s back to produce another dinner on November 5th, from 2:00 p.m. to sunset. Tickets are $350/person with proceeds benefitting the Laguna Art Museum.

The behind-the-scenes on this sort of set up is almost as interesting as the amazing dinner he and his guest chefs turn out. Obviously, you can’t set up a table for 120-150 people just anywhere without expensive permitting and public closures, so he learned to opt for privately owned land.

I’ve traveled to two of his dinners – one in a vineyard, and one in a cornfield – both of whose owners generously donated land, created easier access, and proffered electricity or generator adaptations to allow Denevan and his staff to cook in the middle of nowhere.

150 People Dining on the Beach?

Southern California’s popular beaches are hardly “nowhere,” and we all know that Laguna Beach has beach visitors all year long. So, when the idea began two years ago to host an Outstanding in the Field dinner on the beach, there was only one place for the Art Museum to turn: Hotel Laguna.

As most locals know, the historical Hotel Laguna has, for decades, been one of the last remaining owners of a “private beach” in the state of California. Of course, most people don’t even realize they’re traipsing through a privately owned beach (even when Hotel weddings are happening). The Hotel has always encouraged easy access through the beach and even up its stairs to the restaurant and hotel above (which most beachside resorts in Laguna do not allow).

“We love providing our beach for this sort of special event,” says Stefan Andersen, General Manager for Hotel Laguna. “The Museum and the Outstanding in the Field people have been great to work with – they pack everything in, and we set up their cooking stations on the platform that usually serves our private Beach Club members.

“It’s just a great way to give back to the community, because we know most of the people dining at this amazing table are our locals,” says Stefan. “And, if people are driving in for this event, we love that they can enjoy a truly memorable dinner on one of the most beautiful beaches in the world. It will be a great evening for everyone.”

To purchase tickets for this truly iconic event, go to LagunaArtMuseum.org to access the Outstanding in the Field beach dinner tickets.