Pageant of the Masters Tix Just $17 Through St. Patty’s Day 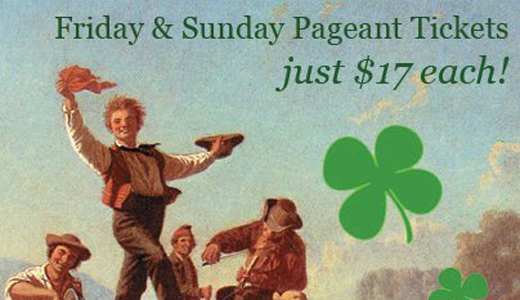 The only show of its kind in the world, the Laguna Beach Pageant of the Masters has a pot of gold waiting for you at the end of this short-lived rainbow.
Now,  through Monday (March 17th, St. Patrick’s Day), get your tickets for the 2014 Pageant of the Masters for just $17 during their St. Patty’s day sale! Just through this weekend, upcoming Friday and Sunday night show tickets are only $17 – regularly $30!
The offer applies to Director Tier Sides, which is a heck of a decent seat in the house. S ee details and order your tickets online now!
This year’s show is titled,  The Art  Detective, and will reveal how lost treasures were discovered, where crimes of passion were uncovered (or covered up) and how creative riddles were unraveled, with a gallery of the world’s great masterpieces providing the clues.
AND! With every ticket purchase, you’re an official Pageant of the Masters patron, which means you’ll be admitted to  The Festival of Arts – California’s Premier Fine Art Show, absolutely free all summer long! Simply show your Pageant ticket at the Festival’s front gate. You’ll enjoy stunning artwork, hands-on demonstrations, wine tasting, and much more. Come back again and again.

Well, try to get any Laguna Beach resident to explain what the world-famous Laguna Beach Pageant of the Masters is, and you will probably find them fumbling for words. I still remember the first time I asked about it … I had recently moved to Laguna, and was in a cab on the way to the airport. The cabbie asked me if I had been to the Pageant yet. I told him no, but that I was looking forward to it from what little I’d heard about it. The cabbie was immediately dismayed that I had heard so little about the Pageant, so I asked him to explain. He tried, and was so overwhelmed that he started to cry.

Kid you not. This is a true story.

If you go on the Pageant website – www.foapom.com – their own describe the Pageant as “90 minutes of living pictures, incredible faithful art re-creations of classical and contemporary works with real people posing to look exactly like their counterparts in the original pieces.”

Uhmm . . . ok. So, I get a general idea of what this means. It’s an entirely different meaning, however, when you’re ushered into the great, stone amphitheater and the show actually begins.

The first time I saw the Pageant of the Masters, my best friend, Diana, was out visiting from Denver and accompanied me. The curtains parted and the first “art piece” – this magnificent grand master’s painting, a larger than life piece, was there on stage. It was an enormous expansion of the original art, of course. We oohed and aahed and thought that was pretty great. The curtains closed and re-opened to a new painting, equally as large and overwhelming in its immense size and fidelity to the original … and then, all of a sudden … the people in the painting got up and WALKED out of the painting.

I kid you not, we had NO idea that this is what we would be in store for at the Pageant of the Masters. We turned to each other, mouths hanging open, and “got it” the rest of the show. (Thank God the pageant is kind enough to educate the sitting public early in the game as to how a “painting” or a sculpture” is actually put together with real people.)

This Pageant is the only one of its kind in the world. It is a sizable annual venture of VOLUNTEER people and VOLUNTEER painters, craftsmen and costumers who diligently re-create famous paintings, sculptures and statues, from the famous DaVinci Last Supper to Rome’s famed Trevi Fountain (yes, live people are “plastered” from head to foot to resemble the characters in that fountain). It is extraordinary.