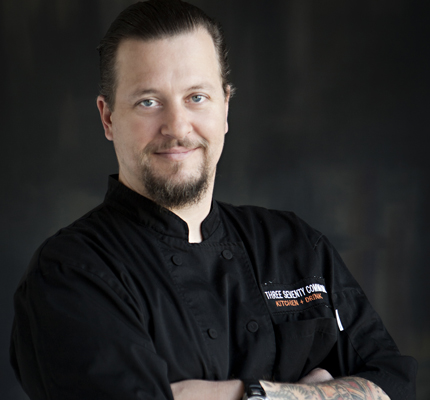 This week, it seems I’m on the subject of great Laguna Beach chefs finding new restaurant space to the south of us.

With the two near each other, I’m hoping that we’ll be seeing more of Chef Ryan now that he’s not required to be as physically present in the Santa Ana restaurant he turned into foodie favorite, North Left.

Apparently, It’s a Pizza Renaissance Out There

Great Laguna chefs’ mind also think alike as Chef Ryan is opening a craft pizzeria, a single-concept restaurant similar to what Laguna Restaurateur Cary Redfearn will be opening in July at his downtown Laguna restaurant, Slice.

Chef Ryan, however, will be focusing on New Haven-style pizza. The place will be called Parallel Pizza, representing the idea of parallel coasts – East Coast flavor and West Coast lifestyle. As far as I’m concerned, though, the greater parallel for this foodie pizza establishment lies in the combination of the marvelous chef minds of both Ryan Adams and fellow-chef buddy and Parallel Pizza partner James Nunn.

Most of us are familiar with Chef Ryan’s stellar cuisine resumé here in Laguna Beach, and he’s a successful acting consultant to other chefs in the area.

Two years ago, Ryan told me that he was looking for a smaller space for a new concept and, at the time, was considering a space by 7 degrees in Laguna Canyon. But, with Dana Point’s changing economy and incentives for chefs, he found an even sweeter deal just blocks from the Dana Point Harbor.

It’s no surprise that he and Chef James Nunn gravitated toward each other – they’re both phenomenal, rising stars with a shared love of inventive food, wry humor, energetic music and tattoos.

Chef James Nunn: Always in the Spotlight No Matter What the Stage

Chef James spent his, ehrm, “formative years” on tour as a successful punk rock musician before trading his boots and studded bracelets for slip-resistant chefs’ shoes and a chef’s coat with that little pocket for tasting spoons.