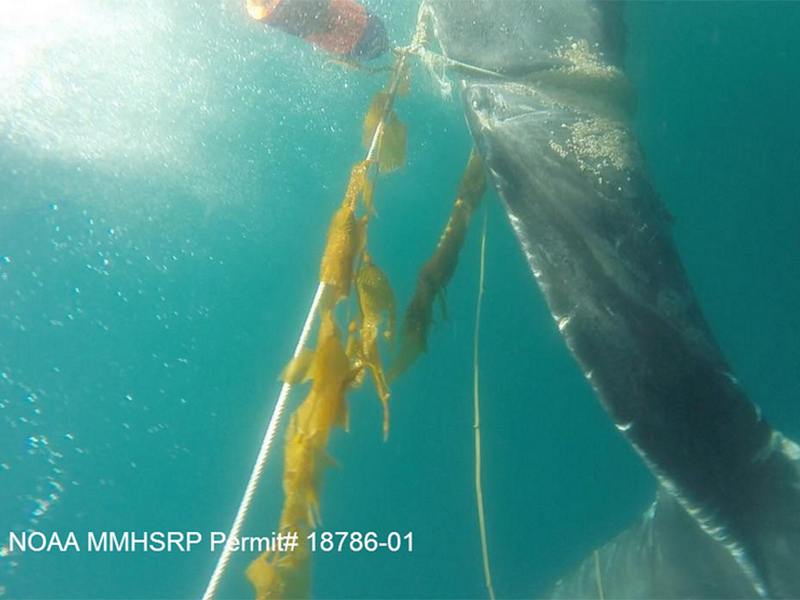 But few people know that the PMMC personnel regularly go out on calls to free entangled marine mammals such as giant humpbacks, California Grays and more. This week, the team was in the thick of it, working on freeing an entangled humpback that many had seen and tracked from farther north. The operation was successful! Here’s the press release about the adventure.

If you see a sick seal, sea lion or entangled marine mammal, please understand that it can be dangerous to approach. Professionally trained people are readily available by calling the PMMC hotline at (949) 494-3050 or, to report entangled whales to a direct line, SOS-WHALE hotline, (1-877-767-9425).

A juvenile humpback whale about 25 feet long and entangled in lines from what is believed to be Dungeness crab gear from Washington was cut free on Sunday off southern California by responders from Marine Animal Rescue, Pacific Marine Mammal Center, Sea World Rescue, NOAA Fisheries and community members.

Marine Animal Rescue (MAR), Baywatch Cabrillo and Redondo Beach Harbor Patrol responded and attached a telemetry buoy to the whale that included a satellite tag to track the animal’s movements. After attaching the telemetry buoy the MAR team documented the entanglement and helped coordinate a plan of action for Sunday.

As part of the response, four large orange “poly balls,” or floats, were attached to the trailing line of the whale to slow its movements and keep it at the surface with the telemetry buoy.

Once the whale slowed, the team cut the line using a special “flying” knife. The knife is attached to a pole, with a line back to the rescue boat. Once the knife was in position, responders removed the pole and the drag of the boat on the line connected to the knife cut through the entanglement. All the line wrapped around the whale’s body then fell off to the right side and trailed out the right side of the whale’s mouth.

About 1:30 p.m., responders made a final cut to remove the trailing line from the whale, leaving only one strand of white line running from the whale’s mouth to the leading edge of its tail flukes. Unfortunately mouth entanglements are very difficult to remove, so the line was cut as short as possible with the expectation that the whale will shake the remnant line on its own.

At about 4:00 p.m. Sunday afternoon, reports of a second entangled whale off Dana Point came in from Captain Dave’s Dolphin Safari, and then again from Dana Wharf Sportfishing. After reviewing the photos responders determined that this was the same whale the response team had just freed. Photographs remain to be analyzed to determine if any line remains in the wound.