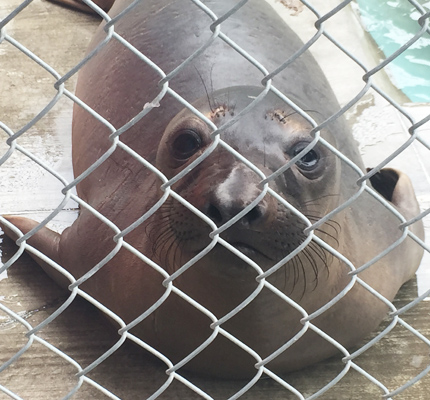 The super-popular annual Martini Madness party, a spring fundraiser for the Pacific Marine Mammal Center, is looking to exceed last year’s record-breaking attendance with a return to The Cliff Restaurant on Sunday, June 11th.

Initially the brainchild of Jon Madison’s Madison Square & Garden Café, the Martini Madness Party moved last year to The Cliff Restaurant to expand its capacity, and the crowds happily filled in.

“It was a no-brainer to do this again for PMMC,” says Andrew Turula, General Manager of The Cliff Restaurant. “Both of our entities have been here in Laguna Beach more than 30 years, and it’s important to us to support the little home-grown cause that became a nationally recognized hospital for seals and sea lions.”

The Martini Madness party rollicks from 4:00 p.m. to 6:00 p.m. Tickets are $50 prior when purchased at http://PacificMMC.org, or $60 at the door and give access to the Cliff’s signature martinis, house wine, and a sizable spread of appetizers and light bites.

Live music will be provided by F Jams, and there’s a hint of some kind of virtual sea lion experience that I’ll be standing in line for, assuredly.

The party couldn’t happen at a more appropriate time as, in the last two weeks, the Pacific Marine Mammal Center has been overrun by adult females – many of whom are pregnant – who are being poisoned by a toxic algae bloom.

The pregnant moms have been ingesting a greater number of fish to feed their fetuses, but the fish have ingested domoic acid from an algae bloom, exploding in growth because of our wet winter. The toxins attack the brains, causing the soon-to-be moms to become lethargic, have seizures and potentially die.

Of the 25 pregnant sea lions rescued in just the last two weeks, 14 have died at PMMC. These are catastrophic numbers for our little hospital, recognized globally for its near-miraculous endeavors in rehabilitating thousands of seals and sea lions.

With your help, The Martini Madness party can be a great boost to PMMC. Raffle tickets also are available this year – I happen to have a bundle of them I’m happy to sell! – and priced at one for $20 or seven for $100. Contact me at Diane@LagunaBeachBest.com for raffle tickets, and go to the PMMC’s website for Martini Madness tickets. I’ll see you there!