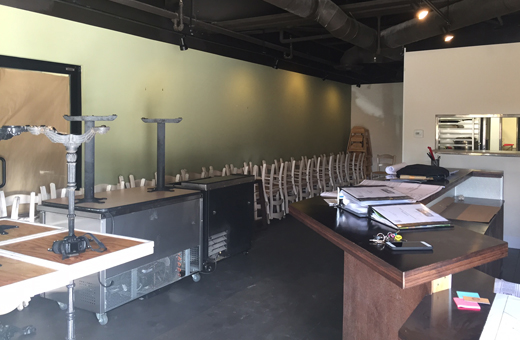 Watch for significant changes in this North Laguna space as Scott McIntosh prepares to re-introduce Asada Restaurant to yearning fans.

In late 2013, when we lost Scott McIntosh’s Asada Restaurant on “restaurant row” in Laguna Beach, you certainly couldn’t blame the quality of food or standard of service. With decades in the restaurant creation business, McIntosh in one of the most respected in these Western United States.

Asada, his creative Mexican food concept, was a hit with Laguna locals and visitors from Day One, and it was a crying shame we lost its presence altogether. The great thing, though, about great chefs and restaurateurs (of which McIntosh is both) is this: great concepts never just die. And – happily – Asada Restaurant – will be rising again this April in North Laguna Beach.

Cozied next to the Gina’s Pizza restaurant, and just a few steps from McIntosh’s other restaurant, Reunion Kitchen (slated to open in May), the new Asada Restaurant will be a smidgeon of a restaurant in comparison to its former sprawling presence.

All the better, then, for a condensation and presentation of Asada’s “best of,” says Scott. “We’re going to focus on what we did really well at Asada … our crave-able recipes and our creativity with proteins … with a high energy, rock-and-roll sort of vibe.”

Crafted as more of a true Mexican cantina, the 1,200-square foot restaurant will dial in just enough tables to seat about 30-35 returning fans. McIntosh hopes to expand food and drink service to the outside patio, too. “We’re sort of a fast casual restaurant but with servers,” says McIntosh. “We’re not going to make you carry your own food around.”

Asada Restaurant was – and will be again – an elevation in Mexican comfort food. Steak tacos will be stuffed with filet mignon and fish sandwiches will be the freshest assortment available on that morning’s local market. Daily made fresh salsa options will return, including the warm salsa initially crafted by McIntosh in the first restaurant rendition.

With a promise to bring back the biggest sellers, McIntosh also hints to a “secret menu” of favorites that will also be available to those who frequented the original Asada. Further, the Asada team will be making its own tortillas and serving up a full-service bar that includes a wild collection of Mexican craft beers and tequilas.

“Obviously, we can’t create a 150-bottle display of tequilas like we did at the old Asada, but we’re bringing in the best of the best in Mexican craft  … not the most expensive … just the best,” he says with a big smile.

“We could have easily gone for a larger restaurant footprint for Asada’s return,” says McIntosh. “But, I’m really looking forward to this new, smaller space. Small allows you to kindle that energy that people love to be around.”