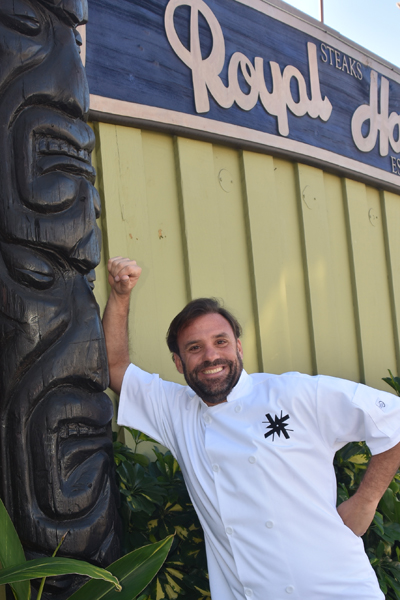 The restaurant closed temporarily on Tuesday, Jan. 22nd, with plans to re-open shortly after Maro and his brother, Martin, participate in March 3rd’s renowned OC Chef’s Table for the Illumination Foundation. The two are joining 40 other top-ranked Orange County and L.A. chefs to raise funding to help the non-profit break the cycle of homelessness.

Royal Hawaiian’s storied history
An iconic landmark since 1947, Royal Hawaiian most recently changed ownership in 2015 when Mo Honarkar purchased the commercial block that includes the restaurant. A management team within the Honarkar ranks re-opened the restaurant at that time and has since been operating the well-known “tiki bar” concept.

In the new agreement, Honarkar’s company will act as landlord while Molteni owns and operates the restaurant’s business.

“When we acquired the famed tiki bar and restaurant in 2015, we worked hard to restore its status as a beloved local hangout,” said Hasty Honarkar, Vice President of Concept Creation for Laguna Creative Ventures.

“Over the last three years we’ve made a lot of wonderful memories with our Laguna and Tiki ‘ohana,” she continued. “We look forward to having a Lapu Lapu when the Royal Hawaiian reopens soon!”

A long road … and a short drive … from Maro Wood Grill
After years of success and accolades at his Laguna Beach restaurant, Maro Wood Grill, Chef Maro Molteni sold his restaurant in July 2017, allowing the new owners to keep his moniker. He and his family returned to Argentina, where he worked with older chef brother, Martin, on completing and debuting a number of large culinary projects.

Upon returning to Laguna Beach a year later, Molteni was determined to find a larger restaurant space in Laguna. In late October he connected with Honarkar, whose own Laguna commercial properties house a few ideal restaurant spaces. After waiting through the busy holiday season, the two entities made it official.

Martin Molteni, officially deemed “The Best Chef of Argentina,” will be joining his brother in the new venture. The two brothers have independently collected a host of awards and accolades regionally and internationally, but have decided to devote “the next decade ahead” to collaborating and creating successful concepts together.

Chef Martin will return in February for an extended stay. Over the next year, he plans to travel regularly between Laguna Beach and the culinary empire he has created in Argentina.

A return of more than just vintage drinks
Born and raised in Argentina, the Molteni brothers will continue to pay homage to Royal Hawaiian’s Polynesian culture, particularly as wood-grilled beef, chicken, pork and seafood is so much a part of that world. For centuries, Hawaiians have crafted their meals over open wood fires in the great outdoors, a culinary skill that syncs beautifully with similar Argentinian heritage. “

“After the Royal Hawaiian opened in 1947, it enjoyed decades as the “go-to” place for the greatest steak and freshest fish around,” said Chef Maro.

“Of course, the Lapu Lapu drink is never going to go away, but the real ‘nostalgia’ we’re interested in has to do with creating that amazing Polynesian steakhouse again,” he said.