Just a quick note – I was at the private opening party last night for The Ranch’s grand opening of Harvest restaurant, it’s fantastic and almost-final addition to The Ranch’s ongoing refurbishment. What a happy night for Owner Mark Christy!

While I’ll be doing a more extensive dining review in a few weeks, suffice to say that this “soft opening” party at the Harvest Restaurant was one of the most impressive I’ve seen in a long time. New Chef Charles Imbelli and his crew were busy with tray-passed hors’ d’oeuvres, a raw bar station, and entrée station AND a “sweets” station. With each sampling, the food was creative, unique and (miraculously for the entreé station, piping hot).

The Harvest Burger was served up as a slider with a delightful twist of tomato jam and horseradish aioli. The Hamachi Crudo with pickled pears proved my favorite at the Raw Bar station, but I had to declare a tie at the Entrée Station. 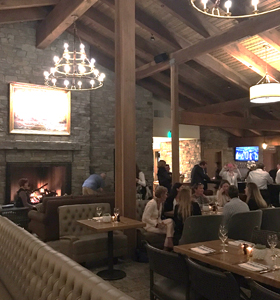 Chef’s Pan Seared Salmon with Red Pepper Tzatziki offered a fun bite of dill pickles and marcona almonds (which, when I die at a very old age, I’d like to be buried with to assure my favorite snack in my afterlife). The Salmon was seared flawlessly (and for an entrée station on the outdoor patio in dim light, that’s saying something for Chef Charles and his team). The Salmon’s nemesis, though, was the awesome Lamb Meat Ball entry with harissa tomato sauce. Both were so delicious, there was really no winner.

In a short welcome speech, Mark Christy noted that, in their search for a new chef, they were looking for someone who was not only a world-class cook but had that connection to the awesome commitment and responsibility of this beautiful reparation that has become The Ranch.

As it turned out, Chef Charles was initially interviewed by then-Executive Chef Camron Woods for the Banquet Chef position. He noted that, as he was driving home that day, he called his wife and told her how much he wished he could work here at The Ranch. As it turned out, just  three days later, Chef Camron accepted a position in Texas, and the phone call was made to Chef Charles.

“I couldn’t drive back here quickly enough,” he told the crowd with a wide grin on his face.

What an amazing and magical place the Harvest Restaurant is! Looking forward to many more dinner events here!