The Ranch Opens for Daily Breakfast Far Beyond Traditional Scheme 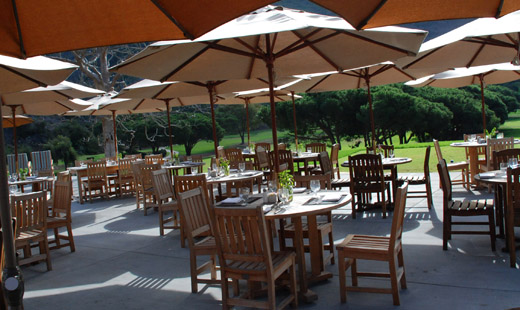 For those of you still gnashing your teeth over the loss of North Laguna’s Jean Paul’s Goodies, I have amazing news for you: JP’s famous espresso machine was saved from the trash heap by none other than Ranch owner Mark Christy.

Of course, as the new proprietors of The Ranch are learning, “refurbishment” is coming with a patient and somewhat costly price, even for simple espresso machines.

When Ranch personnel tracked down the original manufacturers of the unique machine (the Pasquini family in L.A.) to clean and refurbish its innards, their great grandson and current proprietor, Mateo Pasquini, drove down to The Ranch to argue against it.

“He had actually sold the machine to Jean Paul 30 years ago, and figured we really would rather buy a new one than go to all the expense of fixing this one up,” says Bjorkman, “But, for us, it’s more important to keep the heritage going. That’s our mojo … it’s what we live by here.”

Indeed. From the beginning, The Ranch’s focus and vision has been on “retrofying” the property while still putting nifty and thoughtful innovations and surprise in play. Take, for instance, The Ranch’s newly renovated Ben’s Pantry in the old coffee shop’s location, and the daily breakfast menu they launched just a week ago … everything they do here at The Ranch is a lovely mix of nostalgia and creative, modernized craftery.

“Obviously, we can’t wait for the day that the construction delays are behind us,” says Jim Tolbert, the Director of Sales & Marketing. “But I think the hand we’ve been dealt has almost forced us to be even more creative with what we can do.”

While The Ranch still can’t offer indoor dining, it can offer a truly fabulous breakfast and lunch experience on its patio overlooking the first tee. (As we all tuck into breakfast menu items in the airy, soothing place, the resident deer wandered out onto the golf course below us. “Oh good,” jokes Bjorkman, “They showed up right on cue … you know, we have an app for that.”)

Additionally, the refurbished Board Room just off the main patio can cater to as many as 30 group diners, while another one-third of the patio is devoted to bar tables for the grab-and-go or cocktailing crowd that patronizes the reinvigorated Ben’s Pantry. And, of course, The Ranch is catering any number of tented private affairs on the same patio.

For The Ranch’s Director of Culinary Operations, 36-year-old Camron Woods, it offers a perfect opportunity to meld “tradition and creative freedom” in the menus, too.

“When it comes to breakfast especially, there are certain dishes you just can’t mess with,” he says. “Two eggs over easy with bacon … sure, we can offer that. But, we also have the freedom here to do some great craft cooking, to create dishes that are truly a step away from the norm. Sometimes, we let the tradition stand alone, and other times, we bring a little innovation to the tradition.”

And this, my friends, is where the fun begins in the breakfast menu at The Ranch. 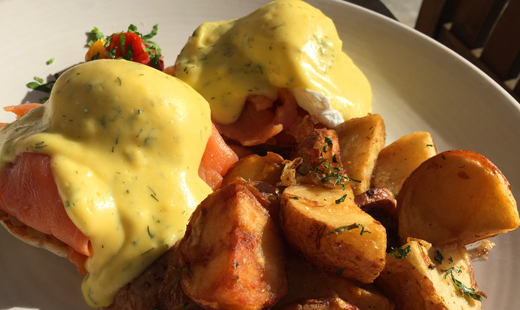 Case in point: The “healthier version” of Smoked Salmon Benedict. Chef Camron house-cures the salmon over a 3-day timeframe in a mix of brown sugar, salt, lemons, limes and oranges.

Meanwhile, to create his hollandaise sauce, he creates ages an original champagne vinegar base (“you know, shallots, thyme, vinegar, that sort of thing,” he shrugs nonchalantly), and tosses dill into the mix. And, he won’t butter the English muffin underneath (“Poached eggs come with a lot of water moisture and, unless you dry-toast the muffin, you’re going to get sog somewhere in the middle,” he explains).

End result: Certainly one of the best Eggs Benedict I’ve experienced in years.

Given that our Chef was raised in South Carolina with a mother and grandmother who both learned to cook in West Kentucky, he brings some great Southern tradition to his California fare. 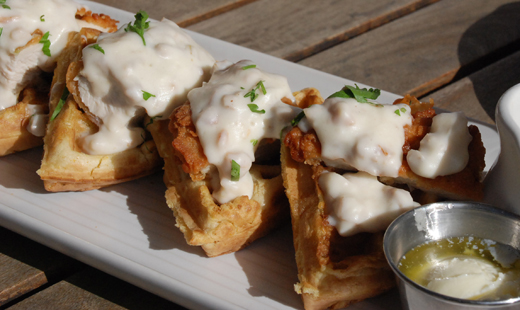 The Chicken & Waffles are just that – a loving forkful of Southern love. Piping hot Belgian waffles are topped with tender chunks of fresh-out-of-the-fryer fried chicken, which is then generously swathed in biscuits-and-gravy kind of homemade gravy. Chef is merciful at least, in offering a mound of whipped butter and fresh maple syrup as side dishes.

“I grew up on fried chicken,” Chef Camron  says. “It has to be one of my top three food items in the world. There’s something so comfortable about it … but there are plenty of ways to push it out there a bit more. This dish is a great combination of sweet and savory. You’ve got to have the salt with the sweet.”

Just as the aforementioned dish, Chef’s side dish of grits makes no excuses for itself, either. It arrives in a small skillet, steaming and blanketed in a sheen of cheese. So often a misunderstood and misrepresented dish, these grits are mighty and proud. Wow, are they good. 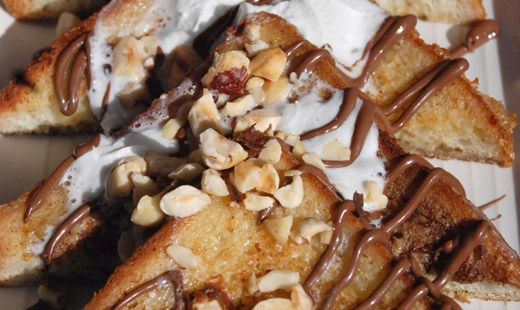 Then, of course, there’s the Brioche French Toast, with Chef Camron’s homemade version of Nutella adorning each slice. Apparently, Nutella is an easy concoction of ground hazelnuts (“ground to almost a flour-like consistency,” he advises), butter, milk, sugar and chocolate. Easy, right?

It certainly looks easy on board this French Toast, and it certainly goes down easy, too. 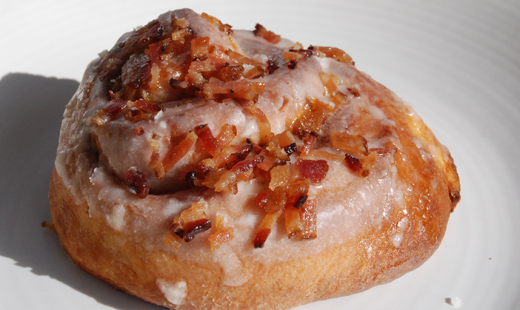 As it turns out, Chef Mary is actually Camron’s wife – the two met in Atlanta while working at The Four Seasons, moved to San Diego in 2007 to open the Grand Del Mar resort, married in 2010, and then moved up to the Laguna Beach area at the start of this year.

I, for one, am terribly glad she followed him if just for the resulting Cinnamon Roll. It’s a crazy-good combined chefs’ effort of her pastry skills and Camron’s love for “real bacon.”

For his side of the bargain, he sources purebred pork (whose meat is actually red like beef), and then cures the pork in a salt and sugar mix for two days. Then, he rubs the bacon down in bourbon, lets that air dry until a pellicle skin forms, and eventually pops it in the smoker. The end result adorns the giant roll like the crown on a triumphant king’s head.

Pantry Dials in the Passion, Too

The two chefs, apparently, have more than a couple joint efforts on the various menus. At the new Ben Brown’s Pantry, for instance, Tolbert highly recommends the flaky croissant stuffed with house made lean chorizo.

We eventually wander over to said Pantry to admire Jean Paul’s espresso machine (now minus the rubberbands that were holding it together), and talk about the expanded pastries, sandwiches, cocktails and fine wines the little shop provides.

Whether it’s a quick sandwich or a Bistro Steak from the lunch menu, Chef Camron is imagining a happier result at every turn.

“There’s something about Camron’s cooking that just has gusto to it,” says Bjorkman. “To be a great restaurant in a hotel resort environment, you have to have a unique quality about yourself,” he continues, “But we all wanted this restaurant to be able to stand on its own, too, and that … I think… requires an even greater amount of passion.”

Mission accomplished, Chef. What a great new breakfast and lunch venue for locals and visitors alike.