The former Senor Fish location will soon be the second coming of Asada Mexican Restaurant.

True to his predictions at the end of 2013, Restaurateur Scott McIntosh is not only bringing his current successful restaurant concept to Laguna, but he’s opening a second Asada Restaurant right next door.

As I noted in June, McIntosh, with years of restaurants under his belt (Claim Jumper, Nick’s and then Asada Restaurant before financial partners proved disappointing), went on to open Reunion Kitchen in Anaheim Hills. The concept of home cookin’ decadence took off like wild fire, and Reunion has proven one of them most successful restaurants in that area. 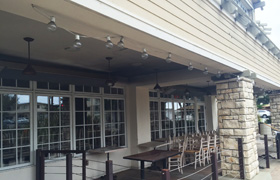 McIntosh is introducing the primary Reunion menu “minus a few items that are just too difficult to handle in a smaller kitchen” later this year in North Laguna in the Pavilions complex. See the Anaheim Reunion menu here.

But even better news:
McIntosh told me this weekend that he’s also opening a smaller version of the original Asada right next door in the old Senor Fish location.

“We’ll be doing the same Asada concept with homemade tortillas and killer Mexican beers and tequilas,” he says. (No complaints here.)

While various permits are still in play, McIntosh is planning a November opening for the Asada Restaurant and, then, the Reunion opening “a month or two later.”

Subscribe with your email here at the site to receive updates on menu, grand openings and more.