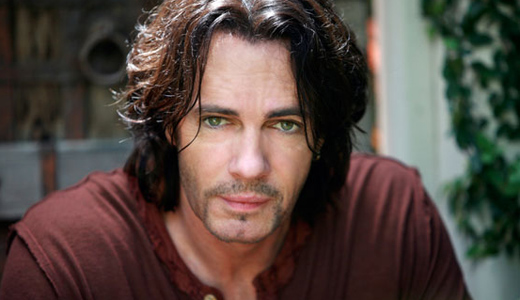 If you don’t know at least the chorus line to “Jessie’s Girl,” you’re way too young to be reading this article. (Who doesn’t know “Jessie’s Girl”?)

Rick Springfield, the gentleman who first shot to the top of the global music scene with 17 Top 40 Hits wasn’t apparently satisfied with one industry’s takeover. So, he moved on to television acting in ABC’s hit daytime drama “General Hospital” as Dr. Noah Drake. He has sold more than 25 million records to date and performed for millions of fans worldwide, while millions more have watched him with rapt attention from couch potato position.

And now, he’s strolling into Laguna Beach Books (guitar in hand, he promises) on Friday, June 20, from 1 – 3 p.m., to sign his New York Times bestselling novel, Magnificent Vibration. This is his second NY Times best seller, on the heels of his acclaimed 2010 memoir, Late Late at Night. Apparently, three industries are perfectly fine to be at the top of.)

This is a ticketed event. Each ticket is $24.99 plus tax and includes a copy of the book. Only books purchased at Laguna Beach Books will be autographed. Tickets can be purchased in the store or online at rickspringfield.brownpapertickets.com. My advice – get to the store rapidly. It’s doubtful any tickets will remain on the day of the event, and it’s likely to be a little, well, chaotic.

Rick will be performing a couple of his songs in the store. Later that evening, he and his band will kick off the Hyatt Regency Newport Beach Summer Concert Series with an outdoor performance at the Back Bay Ampitheater. Rick continues to play an excess of 100 concert dates annually, while popping in for guest appearances in shows like Californication and Hawaii Five-O.

Whether you know the lyrics to Jessie’s girl or not, you have to admit this is potentially one interesting cat and a most memorable author event to come. Get those tickets now.