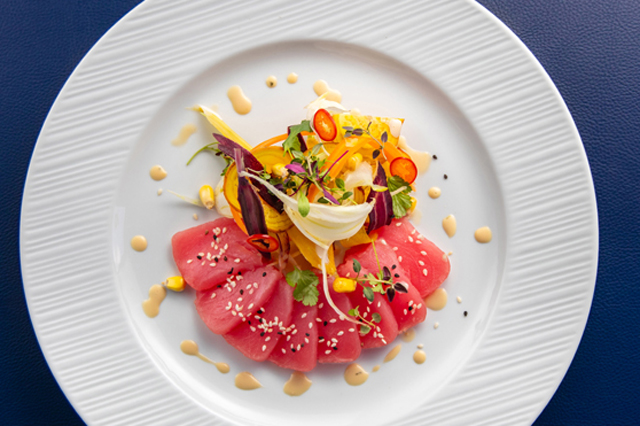 Laguna’s grand dame, the Royal Hawaiian Fire Grill restaurant, is re-opening this Wednesday, April 3rd, under new owner/operators (and brothers) Maro Molteni and Martin Molteni, and the buzz is significant.

The restaurant will be open six days a week, beginning at 4:00 p.m. It will be closed on Mondays. 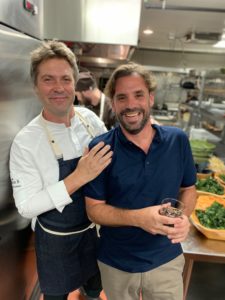 The Royal Hawaiian temporarily closed its doors on January 22nd, handing the keys and ownership of the restaurant to Chef Maro Molteni, the former owner of the award-winning restaurant, Maro Wood Grill. His brother, Martin, is also a part owner, dividing his time between Laguna Beach and his culinary empire in Argentina.

Opening Week Already Sold Out
When the popular chef team announced opening day to their email and social media audiences, it took less than two hours to fully sell-out Wednesday’s opening day. Thursday, Friday and Saturday sell-outs quickly followed suit.MThe Royal Hawaiian team is limiting walk-ins during its first week, too, with their focus on providing great service and food to the restaurant’s packed reservations lineup.

Reservations Available Sunday Forward
There’s hope, though! Some reservations are still available for Sunday, April 7th, and I’m told that next week is substantially quieter. Reservations can be made at the website, RoyalHawaiianLB.com, and Easter brunch and Mother’s Day brunch are open for reservations, too.

“We were really overwhelmed with the number of reservations we received right out the gate, but it was gratifying, too,” says Chef Maro Molteni, “Every restaurant’s first week is a little wobbly, and we know there’s a lot of expectation here for Royal Hawaiian, but we’re hoping everyone will understand, be a little patient with us and enjoy the experience.”

“There were all these great tikis and totems and they were beautiful, collected over years and years of the Royal Hawaiian’s existence,” says Christine. “So, my main goal was to spotlight each and every one of them in a bigger way, and the only backdrop that would work best with them was …blue.

“When I was in Croatia 15 years ago, I saw a sunset with this beautiful blue and I’ve never forgotten that color. So, we reproduced it here. It’s a color everyone loves. It brings the sky and the ocean inside, and that’s what Hawaii – and Laguna Beach – celebrate every day,” she says.

Laguna resident Chris Karl added his design skills on the plant side, building out fresh flower scenics and adding live plants at every turn.

A New World Based on Historic Cooking Cultures
Last week, the Molteni brothers put the shiny new kitchen and new wood-fire grill to the test with two giant private parties for Laguna-centric friends and family. Then, they executed a soft opening dinner on Saturday night with the full menu in play. 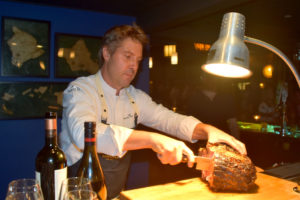 This Wednesday’s opening will introduce the last bastion to full-service play – the much anticipated cocktail list. While hundreds of people continue to speculate about the changing food and drink menus in Royal Hawaiian’s  social media platforms, the chefs and Laguna resident mixologist Sean Melia have been in lockdown mode on what, exactly, will be served.

“Everyone wants their favorite food and drink item from the Royal Hawaiian,” says Chef Maro. “But people forget that this restaurant has been serving up food and drink for seven decades. That’s a lot of favorite menu items!”

“So, we’re definitely maintaining a great Polynesian style … and we definitely have the original Lapu Lapu recipe back … and this is definitely going to be a fun, high energy place. And I think people are going to love our menus.

While younger brother Maro has spent hours in input on the menu, older brother Martin has primarily been in charge of creating Royal Hawaiian’s next era of food and drink.

Martin, named Argentina’s #1 chef, and one of the highest ranked chefs internationally, cooks in multiple cuisine styles as a guest chef to vaunted restaurants everywhere. So, when it came time to restructure for Royal Hawaiian Fire Grill, he spent time researching the historical cultures of Polynesia and tropical/coastal regions in South America.

“You look at the 12,000 miles between the Hawaiian islands and the tropical coast of South America and you think there’s no way they’ve have anything in common in their cooking styles,” says Chef Martin.

“But, their historical cooking cultures are very similar, running in surprising parallel through the ages. So, we thought we’d introduce a new kind of menu to Laguna Beach that weaves these worlds together. I don’t think there’s any better place to do this … in just the few months I’ve been here, I’ve met Laguna residents from all over the world, and we know that it attracts international visitors all year long.

“The Royal Hawaiian is our way of welcoming this big wide world of people into an experience that proves that it really is a small world after all,” he says with a smile.

A Sneak Peek at the Menu 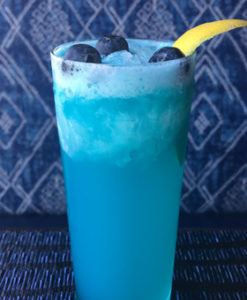 Of course, the classic Lapu Lapu, Mahi Mahi, Blue Hawaiian and more will be greeting guests at the bar. A genius mixologist in his own right, Melia has been working with the chefs to create a number of “other coastal tropicals” to the menu.

“It wouldn’t be fair to work out this whole meld of coastal food items without introducing a whole new world of popular coastal cocktails, too,” says Melia. “This has been such a great experiment; I think we’re going to have a bar program here that is truly unique and a lot of fun.”

More important to Chefs Maro and Martin than the actual menu items is the sourcing of all their ingredients. Together, they spent weeks in research, searching out the finest grass-fed beef and lamb, researching Pacific-based fish and shellfish options, meeting with organic farmers, combing through farmers’ markets and more. 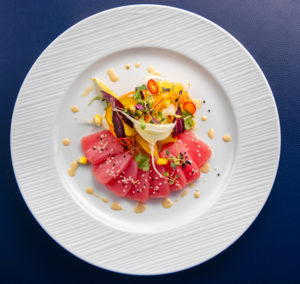 Future Plans
After its first few weeks, Royal Hawaiian Fire Grill will be rolling happy hour into play with a new bar menu. With every intention to welcome families into the restaurant, the Molteni plan to introduce a kids’ menu in the weeks ahead, too. As noted, reservations are already being taken for Easter and Mother’s Day brunch (menu-driven, not buffet). The chefs say a weekly Sunday brunch won’t be far behind, but they want to be firing on all cylinders first. And, rumor has it that a special Sunday afternoon cocktail party will be making a weekly appearance starting sometime in May, too.

“The Hawaiian culture is big on “ohana” – it’s all about the family,” says Chef Maro. “This is what we want the Royal Hawaiian to be – a place where you always feel like family because … in the end, that’s all that really matters. It’s not about the colors of your walls or how you serve your lobster, or the pattern you use you recover your chairs … it’s about creating a place where everyone feels like family.