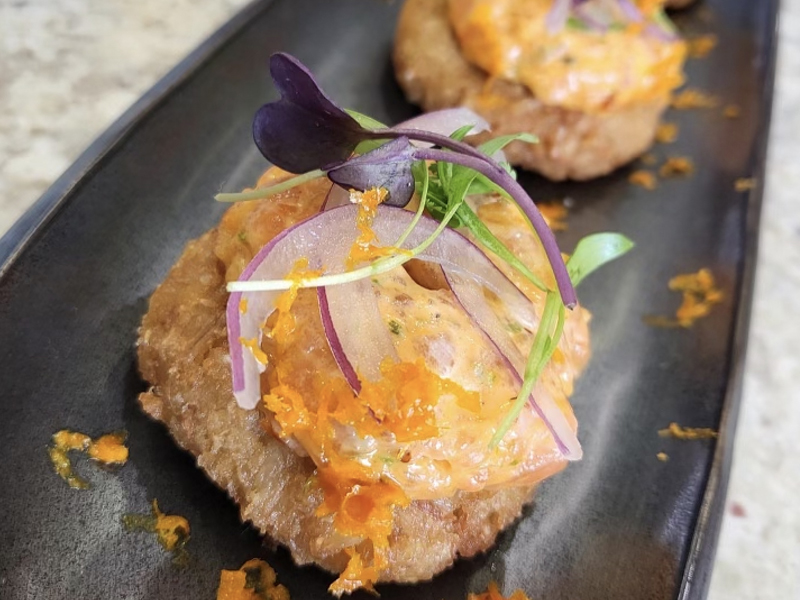 Rum Social, the anticipated new eatery in the old Watermarc space, is nearing ever closer to its finish line. Describing itself as an “upscale Hemingway speakeasy,” Rum Social will feature a variety of Caribbean-based drinks and dishes. 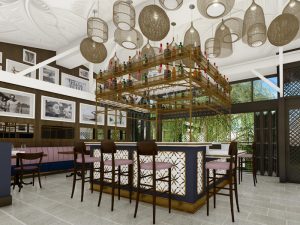 “We’re tentatively looking to open at the end of February,” said Co-Owner John Fisher. “We had hoped we could be open by Valentine’s Day, but there’s just too much between here and that date, and we’d like to get our feet under us before trying to handle such an important date as Valentine’s,” he said.

While the holidays, County permitting delays and COVID outbreaks have continued to affect its construction, the seasoned Rum Social restaurateurs are nothing but persistent. The three partners, Fisher, Ussenko and Stephen Sherwood, are longtime restaurateurs who’ve seen it all. They’re still plucky and enthusiastic as they note that rough electrical and plumbing is done, and kitchen equipment will begin arriving for installation next week.

The team is also starting to close up the walls to begin final finish of both upstairs bar and downstairs dining.

Meanwhile, the team continues to grow with the announcement of two well-known talents in the Orange County culinary world.

Jered Adams, most recently with The Ritz-Carlton, Laguna Niguel, will be acting as Food & Beverage Director overall, “but I’ll be spending plenty of time in the kitchen, too,” he said.

Adams has a long and storied career in fine dining and menu consulting, having developed more than 30 concepts, many of which were in conjunction with Rum Social Co-Partner Ken Ussenko’s many restaurant concepts.

Adams began working as the Executive Chef at the Ritz-Carlton, Laguna Niguel in 2009. Six years later, he left to take over the food and beverage direction of a San Diego restaurant group while working on several concept consulting projects, too. In late 2019, he returned to the Ritz family, moving to a heightened position at the illustrious Colorado Bachelor’s Gulch location in Beaver Creek. Within weeks of his move, COVID struck, and he stayed there for the duration.

When restrictions lifted, Adams returned to the Laguna Niguel location to serve as Executive Chef of Eno Steakhouse and oversee all chefs and culinary supervisors at the establishment. “For a few years now, Ken and I have talked about actually working together on a new concept, so when Rum Social came together, I knew it was where I wanted to be,” said Adams.

“The menu will be a funky, tropical escape”

The Rum Social concept menu will be making its way through the tropics with “bright fun flavors that showcase Caribbean and Asian flair,” said Chef Adams.

“This menu is influenced by all things tropical; I like to think of it as a little funky, a tropical escape that is influenced from a variety of places that are familiar with the term, ‘rum’ … Brazil and Jamaica to Southeast Asia, Indonesia, Malaysia, Thailand, even the Polynesian islands,” he said.

Rum Social will be “responsibly sourced seafood forward” with a mix of sweetness and spice.

“The North African spice routes that plied the northern Caribbean islands had a significant impact on that culture,” noted Adams. “So, while we want to really feature many seafood options, we will be adding in those bold, full flavors, too.”

Though “sweetness and spice” may sound like danger to gluten-free diets, the Rum Social menu will be almost entirely gluten free with many vegetarian options available as well.  While the menu is not yet finalized, the team shared a few “research and development” photos that include a Raw Yellowtail ceviche-type dish, House Noodles with shrimp, and Crispy Rice Cakes fashioned from salmon and tuna (see photo above). 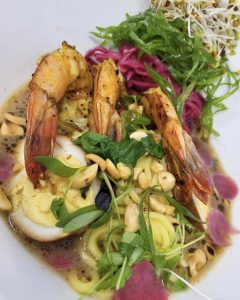 Never will anyone get me to tell them what my favorite restaurant is in Laguna Beach.

Outside of Laguna Beach, however, my go-to favorite was unquestioningly Playground 2.0, an inventive chef’s table led by Chef Owner Jason Quinn.

One of the greatest up-and-coming talents on Quinn’s team was the young Nicholes Herrera (Chef Nick). He started first in Jason’s Playground restaurant but was then trotted “across the wall” to the 2.0 experience where he could work more closely with the immense talents there.

When Nick left that playground in search of another sandbox, I followed him wherever I could find him. His initial forays included Michelin-starred Taco Maria and alongside the talented Chef Tony Celeste at Dana Point’s Whitestone. From there, Nick set off to open restaurants with two different restaurant groups (at different times). Both, however, suffered over-long renovations and opening stalls.

While the Rum Social group was enduring the same frustrating issue, the timing couldn’t have been better when Chef Nick decided to try yet another opening concept option.

Now the new restaurant’s Chef de Cuisine, Chef Nick says that he and Jared are working on a “more playful menu with a lot of shareables.”

“We’ll have a larger menu with a lot of different variations on our proteins, but we’ll have a variety of smaller portions, too, so that people can try more in one sitting,” he said. 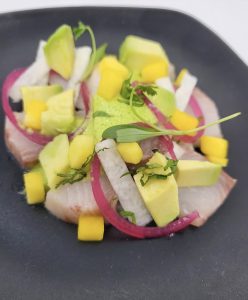 “A third of the team is already hired.”

With her own vaunted history as Assistant General Manager, General Manager and Food & Beverage Director at places such as the Bungalow Huntington Beach, Lifetime and Jimmy’s Famous American Tavern, Rum Social General Manager Jean Stenger says that training in front and back of house will begin in late January.

“We’ve already hired about a third of our team, including an elevated bar team that recently made cocktails from our menu and showed us their creations,” she said.

“When we’re ready to hire the remainder of our team, we will be posting it at RumSocial.com,” she noted.

I’m as eager as you are to learn more about the cocktail “creations” that make it through the final round menu at Rum Social. It turns out that Chef Adams is quite a cocktail and wine enthusiast, endeavoring to create “a modern twist on the classics.”

We’re starting with at least 18 specialty cocktails, with about 50% rum-based and 50% based in other spirts,” he said. “Some drinks you expect to be rum based won’t be, and others you don’t expect to see created with rum will actually be created with great rums,” he said (somewhat mysteriously). 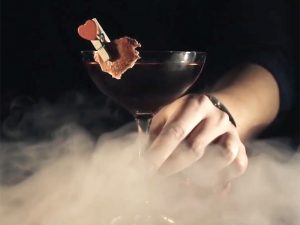 Stay tuned for details and drink photos from me in my social channels and at my website as the opening date draws closer.