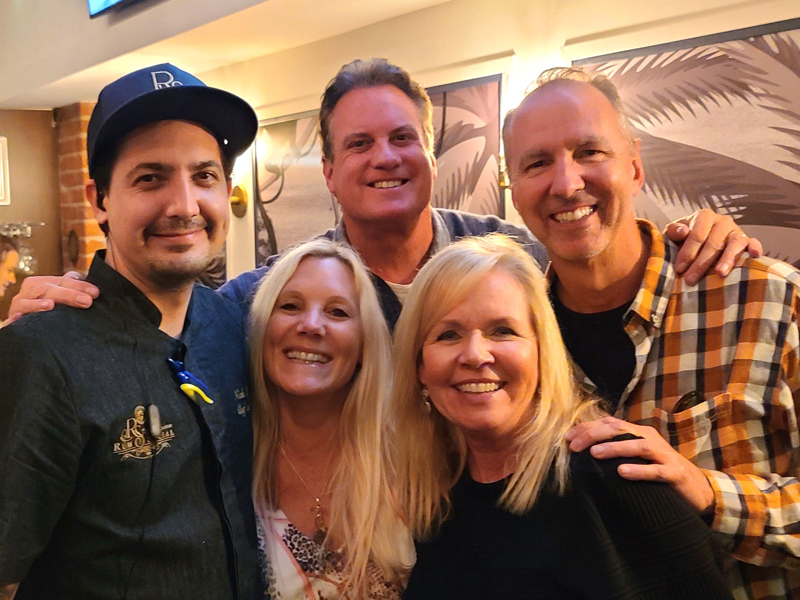 Last night (Wednesday, March 16th), my friend Lisa and I ate at South of Nick’s because I was sure that the newly opened Rum Social would be packed. At about 7:30 as we were leaving, I suggested we “poke our heads in” to see how it was going.

Our intention to just drop in for a minute turned into a 3-hour stay. Somehow I have a feeling this is what Rum Social is going to be doing to all of us out there.

This place just has a great vibe … given that it’s entirely themed around a tropical getaway, this is a great thing. 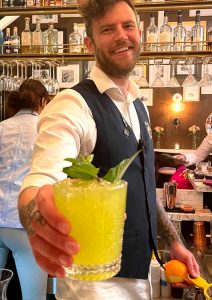 We headed up to the bar and were cheerily greeted by the bartenders, Shawn Abbey and Marlene Spicer. I asked Shawn if he had any specialty drinks for the pending St. Patrick’s Day and, within minutes, he invented one with coconut rum, Midori and more. It was glorious fun. (And yes, he promises to serve it up tonight as well.)

Co-Owner Ken Ussenko trotted up the stairs to greet us (yes, they know me by now), and the kitchen sent out a couple “sampler” dishes to try.

First to arrive was the Rum Social House Salad. While it may sound rather … you know, “house salad-y,” it’s a far cry from the usual uninspired dish.   This is a super-fresh bright and crunchy mix that Executive Chef Jared told me is made up of “Napa cabbage, pickled red cabbage, mixed baby field greens, shaved root vegetables (including my favorite, watermelon radish) and crispy soy crackers (bubuarare). It’s topped with lemongrass emulsion made from confit lemongrass, ginger, key lime, carrots, a dash of palm sugar and shallots all blended together. Then the lemongrass oil is emulsified into the purée.

In short, this salad hits ALL the notes – sweet, tangy, savory and salty. I could only choose this salad for a daily diet and I’d be happy as a clam.

Then it was on to their Charred Brussels with black garlic vinaigrette, fermented Fresno chile, red shisho and crispy alliums (you’ve seen these purple flowers everywhere as they’re more commonly referred to as “cultivated garlic.” This was, by far, the most imaginative Charred Brussels dish I’ve ever had, hands down.

The last dish the chefs sent out was the Duck Confit Fried Rice, which just happens to be two of my favorite separate items around. Cheekily named Uncle Ken’s Fried Rice (because Ken Ussenko declared it his favorite, too), this is smoked bamboo jade rice with tamago egg, carrot and sofrito. For the record, sofrito isn’t just a one-ingredient kind of thing. Most chefs will attribute its origination to Puerto Rico as it is regularly used in soups, stews rice dishes and more. It’s a fine paste made up of onions, peppers, garlic, cilantro, ajices dulces (mild Caribbean peppers), tomatoes, red pepper and any number of chef selected herbs. The duck confit is an addition for $8.

This Fried Rice is layer upon layer of fabulous flavor. it is so aromatic, in fact, that we bth dug into it before we realized I hadn’t snapped a photo first. Chef Jered assures me he’ll be sending me a photo shortly. 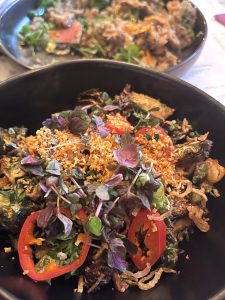 The most imaginative Charred Brussels dish I’ve ever had, hands down.

The Rum Social Bar Menu currently consists of nine dishes and four desserts. (I’m betting that the gelato option on the dessert line-up comes compliments of Gelato Paradiso, which is owned by Rum Social Co-Owner John Fisher. Quite handy that they share the same Peppercorn Alley!) 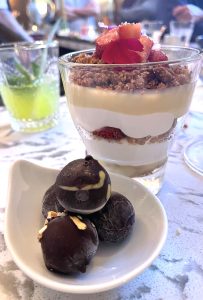 Desserts at Rum Social are inspired, including the chocolate covered gelato balls and the “Cirtrus Parfait,” a layered dish of yuzu, key lime and passion fruit caramel with roasted strawberries.

Fabulous. And then a dish they simply have labeled as “Cirtrus Parfait” turned out to be a layered dish of yuzu, key lime and passion fruit caramel with roasted strawberries.

Although we didn’t try any other meat or seafood dishes last night (hey, we just ate filet mignon at South of Nick’s), I still have fond memories of their Garlic Butter Noodles with added shrimp, the Beef Satay with tamarind peanut sauce and the  Albacore Tataki served up at their Friends & Family party a couple weeks ago.

As we chatted with our neighbors at the bar, Chef Nick Herrera wandered out to see how we were doing. As I’ve noted before, I consider Chef Nick to be one of the most talented chefs (and also one of the youngest top chefs) in Orange County (formerly Playground, Taco Maria’s and Whitestone). Paired with the impeccably talented Chef Jered Adams (formerly Ritz-Carlton. Laguna Niguel), I think this is a match made in culinary heaven. These two creatives are having a lot of fun with their menu and I’m having a lot of fun writing about all the many ingredients they throw together that truly shows Michelin chefs in the making.

Though I promised not to publish the Dinner Menu to y’all (they’re still tweaking), expect 10 “small bites,” another  seven shared plates that they call “Refreshments”  (this is where you’ll find the Fried Rice, Brussels and Rum Social Salad dishes mentioned above. And, yes, they were very shareable.). “Supper Plates” consist of three seafood dishes, the fabulous beef satay I mentioned, jerk chicken and beef rib.

I’m quite sure that Rum Social is going to be delighting locals and visitors for years to come. Be sure to get in soon before the word gets out!Call (949) 549-4014 or go to the website, RumSocial.com, for online reservations. Please tell them I sent you!

P.S. Pictured above, I’m with Chef Nick, left, and my friend, Lisa Harter, right. The two locals behind us, Dean Keller and his buddy, were already at the bar when we got there. It’s great to see locals already showing up to welcome our new restaurant team.