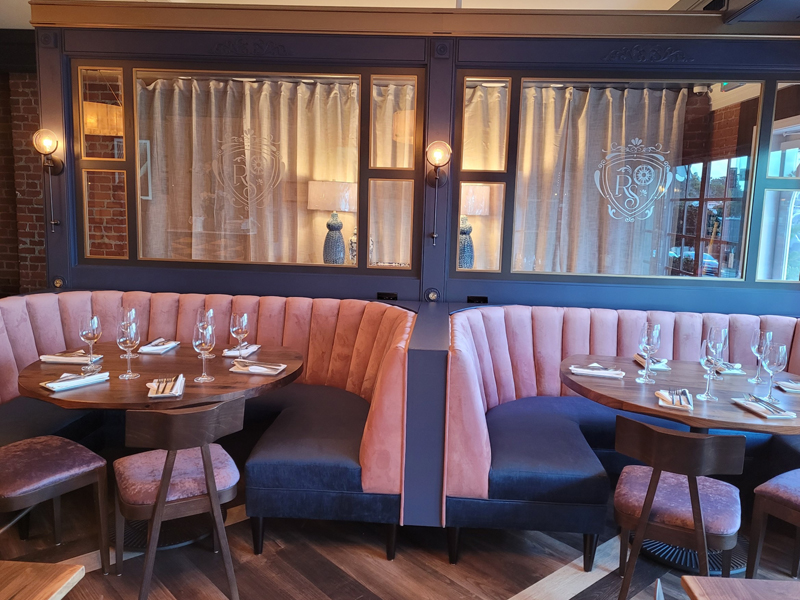 Rum Social, the anticipated new eatery in the old Watermarc space, is finally set to open to the public next week, “hopefully around the 10th of March,” said Partner John Fisher.

The team began its soft open process this past weekend, inviting only friends, family and fellow restaurateurs into the space. They will be tweaking systems through this week, and plan to open next week after “a couple more practice runs,” said Fisher. 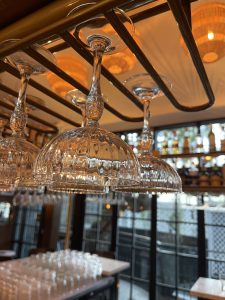 Bygone era martini glasses serve as just one of the many touches to Rum Social’s graceful entrance.

This is a truly beautiful space with an intricately detailed, upscale tropical resort theme throughout.

“It’s all about the texture,” said Ken, who’s known far and wide for his restaurant concept designs, including South Laguna’s The Drake Laguna Beach.

“We wanted it to have a bit of that Barbados or British Colonial style feel. It feels lush and soothing like a Caribbean resort, but still has a bit of playfulness, too,” Ken said.

Many of the framed photos throughout are Ken’s own photos from his travels. Family and friends there at Sunday evening’s party enjoyed pointing out their own kids, sailboats and more in the black-and-white stills. 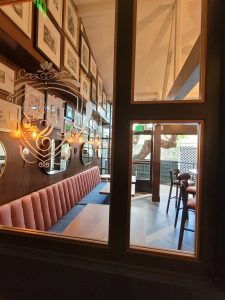 Beyond the Rum Social engraved insignia, the upstairs bar features several framed photos of “island life” while shadow-painted fronds look down from above.

Friendly staff members are dressed in Caribbean blue and khaki and the “optional” straw hats are a perfect, crowning touch.

“We didn’t want to just put our people in black,” John noted. “This is a themed restaurant, and it’s important to us to carry this out in every detail we can think of.”

The old historical bar (formerly downstairs) is now the center of attention upstairs, and the entire room is alive and lively with a new kind of vibe.

Lead Bartenders Shawn Abbey and Marlene Spicer are masters of “the super craft” as they’ve implemented Chef Jared’s original creations while adding touches of their own.

Marlene started in restaurants at the front of house, then moved to back of house (the kitchen), finally ending up at Whitestone in Dana Point as a Sous Chef with Co-Executive Chef Nick Herrera. 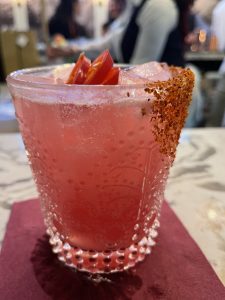 “I love cooking, but I love crafting cocktails, too. It’s an immediate interactive experience with your guests,” she said.

Shawn hails from years as a craft mixologist from the Bungalow Huntington Beach and Jimmy’s Famous American Tavern in Dana Point.

“We just want to put a bit of island into everything we serve up,” said Shawn. “So, you’ll find an Old Fashioned on the menu, but it might be made with a high-level, rare rum. You’ll find a margarita, too, named after the Peppertree here right outside our windows but we’ve found a way to add in spices from the spice trade of Indonesia. It’s a fun twist that I think people are really going to take to.” 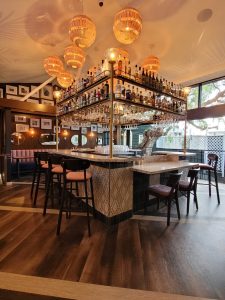 For the record (because I tried one and loved it), the “margarita” is the El Pimintero with Elvelo Tequila, prickly pear, Fresno chile, vanilla, orange liqueur and a tajin salt rim. And for those of you who really want to be in the know, that fabulously healthy Pepper tree in Peppertree Lane is, per Laguna Nursery’s Ruben Flores, a Schinus mole. (You learn these things on his Garden Walk, just saying.)

Chef Jered Adams, formerly of The Ritz-Carlton, Laguna Niguel, started with about 80 “wish list” menu items. With Chef Nick’s input the two began to whittle the options down, changing up several along the way.

The restaurant will be opening as a seafood forward entity with items such as Yellowtail Hamachi, Albacore Tataki, Scallops served in a Coconut Quinoa, a Shrimp & Noodle dish with jade rice, Thai Shrimp, Crab Cakes and more.

There’s plenty for the meat eater, too, including Wagyu Satay (one of the items served at the Sunday party), 3-Bone Short Rib & Grits and more. And more than 40% of the menu is vegetarian with several additional dishes that can be assembled as vegetarian on request. 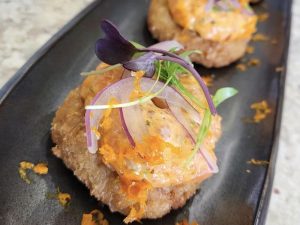 An island flare dominates the Rum Social menu, from fish and meat dishes to vegetarian dishes that includes these Crispy Rice Cakes

“We’ve created many shareable plates because it seems that’s what people are more in the mood for when they’re on a tropical vacation together,” said Nick. “We want to infuse that feeling here; everybody gets a taste of something at the table kind of thing.”

Adds Jared, “That’s really what we’re all about. We want people to sit down, take a look at the menu and say, ‘Let’s go on an adventure together. What looks good to you?’ That’s when they’re really going to enjoy everything that Rum Social has to offer.”

Rum Social is in the old Watermarc building on what I call “Restaurant Row” on Peppertree Lane next to The Saloon. (Fun Fact: The Gelato Paradiso at the end of Peppertree Lane is also owned by John Fisher. Now he can oversee two of his restaurant concepts from one seated location.)

If all goes according to plan, Rum Social may open as early as Tuesday, March 8th. The team, though, is hoping to be thoroughly dialed in by Thursday, March 10th. At time of deadline, reservation lines were not yet open. Stay tuned to my social platforms @BestofLagunaBeach for opening day information.