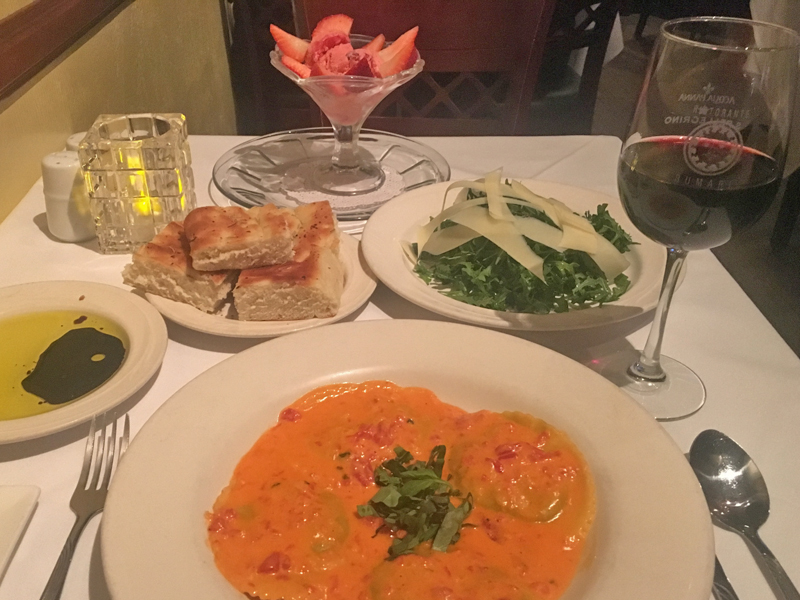 Heading into my dining review last week, I circled the block a couple times before I realized there was a spot right there in front of the restaurant. I whipped into the space, put the car in park and gathered my camera, notebook, purse and key to make my exit.

At the sound of a man’s raised voice, I glanced up to see a waiter from the restaurant standing outside my car, raising his voice at me.

“What are ya doing?” he said, flapping his arms a bit. “This is an alley way. You can’t park here.” Finishing with a larger sweep of his arms and an exasperated shrug he turned back into the restaurant.

Although mortified at my rather blond move, I had to chuckle. I was, indeed, at the front door of our town’s clearly authentic Italian landmark, Ristorante Rumari. I know I’ve found my way home.

Authentic, From the Food to the Love

Ristorante Rumari is as Italian as they come because … well … they’re Italian. Fabulously Italian at that.

For more than 30 years, Chef Proprietor Vince Crivello has doled out consistently great food, friendly family-like service, and rational advice and perspective that has endeared him to Laguna locals and repeat visitors.

Here, there’s a good chance you’re still going to find your favorite menu item, even if you haven’t made it back for a year.

One of my good friends, Don, splits his time between Vail and Laguna Beach, having spent his boyhood summers here with family. For about 20 years, he has only ordered Rumari’s Linguine Nere Del Mare, a black linguine pasta baked in foil with clams, shrimp, tomato sauce and brandy. Asking him to try another menu option is akin to asking him to switch political party lines.

Fortunately, the renowned dish is always there on the menu, and it always tastes as good as he remembers.

To be quite honest, I find myself repeatedly ordering Rumari’s Rack of Lamb special for the same reason. As long as they continue to cook up that amazing dish, I’ll be returning for yet another 20 years to order it.

A Special Menu Through February

Last Thursday night, though, I was on a different mission.

For the entire month of February, on Sundays through Thursdays, Rumari’s is offering a “That’s Amoré” Prix Fixe menu with a glass of house wine or Prosecco for $45/person.

This particular menu is not being offered on Valentine’s Day (this Thursday, Feb 14th), but it’s certainly worth the visit otherwise.

The prix fixe menu is a generous one, allowing you to choose from four popular appetizers, four entrées and three desserts. And – maybe the best part of all – their homemade focaccia bread is served with the meal, too. Vince’s father, Antonio (“Nino”), is the creator of the famed focaccia, and carefully taught Vince its secrets to success before Vince, in turn, passed the vaunted recipe to Executive Chef Jaime Ocampo.

From Crisp Appetizer to Decadent Dessert

It’s a busy Thursday evening, so I stick to the basics of the prix fixe options, starting with the Mozzarella Caprese. It’s a big dish with 4 thick-cut tomato slices piled with fresh mozzarella, slivers of basil and a tidy crown of sun-dried tomatoes. It’s fresh and sublime, the sun-dried addition adding a bit of salty chew to the mix.

A fourth vegetarian option offers house made Ravioli pillows filled with ricotta and spinach. I tell my server, Scott, to choose his favorite from the entrée options and am delighted when he returns with the Ravioloni. Again, this is a hefty dish with sizable ravioli pouches stuffed to the brim and ladled in Rumari’s awesome tomato vodka sauce. I’m able to finish exactly one ravioli – it’s that big. 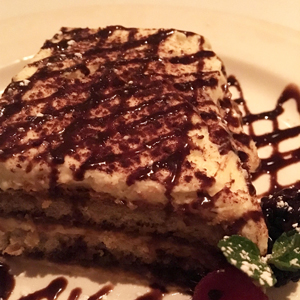 For my third course, Scott chooses (wisely) again for me, arriving with the house made Tiramisu. I’m already full, but Tiramisu cannot be denied. It’s fluffy-light and rich all at once, and I manage all of three bites before I regretfully push it away.

Why Stop the Love at Valentine’s Day?

The “Amoré” menu is a fun delight that’s worth trying more than once. Again, it’s available Sunday through Thursday evenings; it’s not available on Valentine’s Day. (You can, however, purchase one dessert during Valentine’s Day dining and receive a second dessert as a gift from Vince and the “family” at Rumari’s. Call for reservations, (949) 494-0400 or go to RistoranteRumari.com.