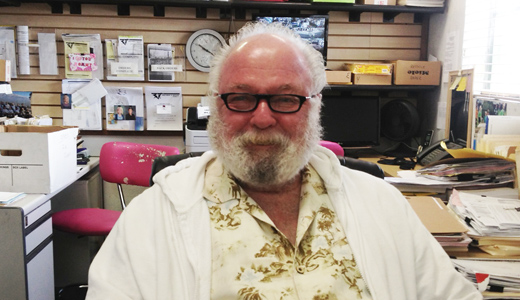 This morning, I was picking up the last of the trappings I needed for my upcoming move, when WHAT to my wandering eyes should appear … Santa!

Holy sugar plums! What’s Santa doing in the San Juan Capistrano U-Haul store? I had to ask him the same (in a conspiratorial whisper, of course, so as not to alert other shoppers in the store). Given the number of gifts he has to deliver these days, maybe he’s signed a joint venture with the U-Haul Company. Who knows?

Whatever his reasons, he wasn’t talking. He just smiled and twinkled.

After pulling out of the parking lot, I decided to start a SECOND contest in our LagunaBeachBest Facebook page during our December holiday season (the first being our 3rd Annual Holiday Palettes Contest) – the Santa Incognito Contest. Where is the Jolly Old Elf hiding in YOUR world?

1. Find your own Santa Incognito and post it at our Facebook page with his location (i.e. Bookstore, Des Moines or Chocolate Shop, Paris). This has to be the REAL Santa, not some mall Santa or guy hanging out in front of the grocery store (with best intentions) for the Salvation Army.

2. I’ll ensure these end up in a photo gallery at Facebook so that all Santa Incognitos remain visible through the holiday season, available for vote.

3. Readers get to vote on the most convincing Santa Incognito.