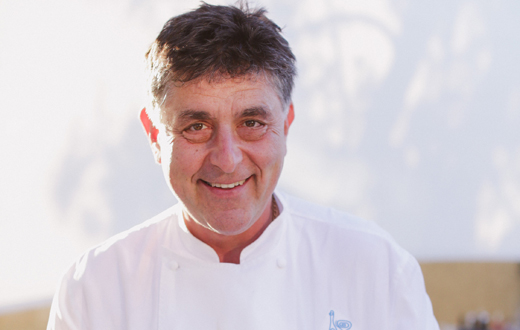 In 2007, when Chef Azmin Ghahreman landed the anchor restaurant space at the revamped Pottery Place, his “comfort cuisine” immediately raised the level of culinary in this town. From his opening day at Sapphire Restaurant, Chef Azmin has consistently innovated one of the most decadent foodie experiences you could hope to enjoy. But … he just couldn’t stop there. Too much creativity in this man’s bones.

Shortly after Chef Azmin opened for lunch and dinner at Sapphire, Chef added the Sapphire Pantry next door, which doles out crazy “picnic food,” coveted dry goods and the largest retail cheese selection in town.

Somewhere between creating the immensely successful branches of Sapphire Catering and Sapphire at School (school lunches for 6,000 very lucky kids), he decided to add brunch on weekends at Sapphire, too. Crowds immediately flocked and praised the innovative menu of global tastes. (I reviewed Sapphire’s Brunch (with gusto) in February.)

While you might think that Chef has enough plates spinning, the man added another hefty plate to his daily repertoire – now, Sapphire is introducing breakfast five days of the week.

Diane and Shaena’s Descent Into Decadence

At an invited media breakfast this week, I joined a few other fortunate media souls to sample the entire Sapphire Restaurant Breakfast Menu. (Good glory.)

There are 12 items on the menu, and it starts with Chef Azmin’s “V6” juice concoction as well as his Fresh Juice of the Day. That’s right. Might as well start healthy, folks, because the food items gets more decadent as the menu items trip down the page.

After sampling both juices (because I’m a spice fan, I loved the Juice of the Day with kale, spinach, apple, lemon, ginger, turmeric and cayenne), we moved on to healthy portions of organic fresh fruit (cherries, yum!) as well as yogurt parfaits with fruit and muesli mixed with apples and grapes.

At this point, we’re feeling almost saintly in our healthy selections … and then the downfall begins. 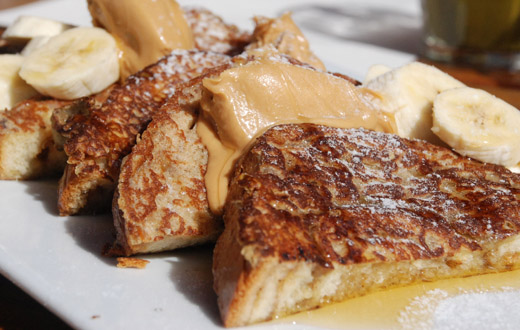 I’ve had plenty of Cinnamon Swirl French Toast in my day but never have I had it served with fresh peanut butter and banana slices. I feel like a gleeful 10-year-old as I fork my way through a hefty slice. 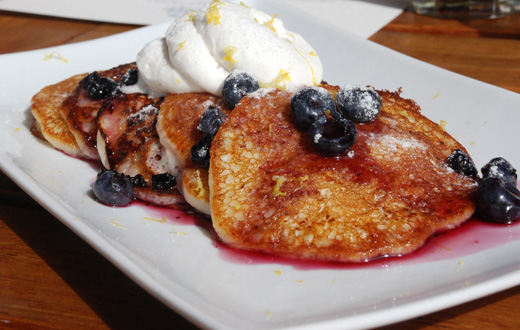 Then, it’s Lemon Ricotta Pancakes, which, I suppose, could be intended as the grown-up version to the French Toast, but with ricotta cheese stuffed inside and topped with blueberry-ginger syrup and vanilla Chantilly, I’m grinning like a school kid again. Oh, Chef Azmin, you just make life so good.

Favorite Breakfast Items From Around the World

Chef Azmin was born in Iran, educated in Geneva, Switzerland and managed his culinary degree in San Francisco at the California Culinary Academy. Although he specialized in French Cuisine there, as he began to move around the world, his unique style morphed as he spent time in these world-class restaurants, resorts and cruise ships.

It’s not surprise, then, that Sapphire’s new breakfast menu includes tastes that have originated in Ireland, Switzerland, Mexico, France, Spain and the good ol’ U.S.

The Chilaquiles dish is created true to Mexico form with crisp chips serving as the foundation to a pile of black beans and chopped cabbage, tomato and cilantro. It’s a beautiful meld of tastes.

The Traditional Eggs Benedict is next. It’s rumored that the first Eggs Benedict was created at the Waldorf Hotel in New York for a man with a hangover. Chef Azmin’s concoction is a perfect cure, even if you’re feeling right as rain. 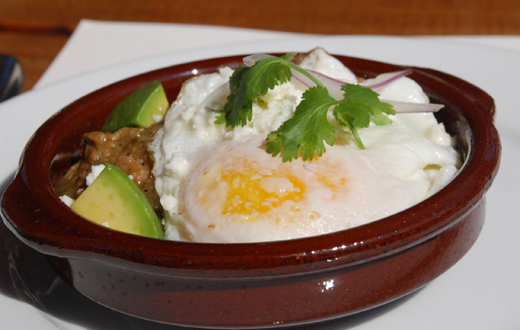 The Braised Pork Chili Verde proves one of my favorites. This time, the chili serves as the base to this dish, and the super-tender pork in sublime green chili could easily be a stand-alone beauty. In this dish, though, Chef adds fresh avocado and queso fresco (semisoft Mexican cheese), and ladles a perfect fried egg atop it all.

It Only Gets Crazier

Yes, there’s still more. Still serving family style for the tables of media attendees, the Sapphire Restaurant team presents two more dishes that I wish I had more room for. They prove to be the other two top contenders of Di’s favorites. (At least I think so. I’m pretty dizzy from all this amazing food.) 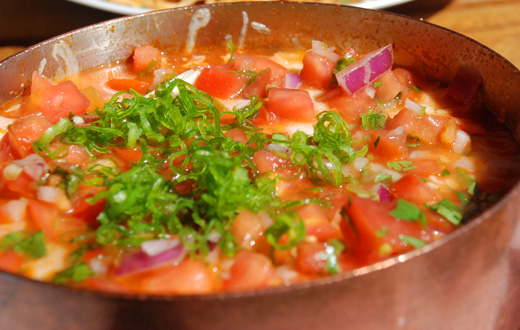 The Turkey Chili Baked Organic Eggs arrive in a copper pot fresh from the oven. If no one were looking (and I had a pair of handy oven mitts), I’d slide the entire pot into my camera bag and make off with the entire dish. It is an awesome plunge into Chef Azmin’s world of “comfort cuisine” with rich, slowly melded turkey chili and organic eggs baked together, then topped with cheese, tomatoes, and red and green onions. 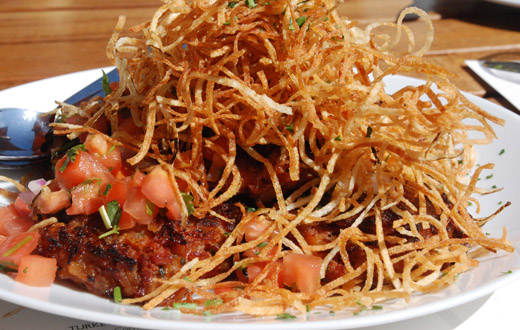 Chef Azmin’s Corned Beef Hash arrives in almost pull-apart fashion, piled under freshly made potato straws. I tell myself I’ll have just a nibble and instead, it takes all my Mother’s polite upbringing to share the dish with my media pals.

Chef tells us he came up with the perfect recipe during his tenure in Hawaii, and just took the recipe with him, installing it at every restaurant he’s worked between now and then. To this I say: Thank God for Hawaii.

Another Distinctive Menu Takes Its Place

With dinner, lunch, Pantry, school lunch, catering and brunch recipes in play, it may seem surprising that Chef Azmin has managed yet another distinctive menu of tastes. For Chef, though, it’s simply another creative outlet, this time every Monday through Friday, from 8:00 – 10:30 a.m.

Be sure you reap the benefits.