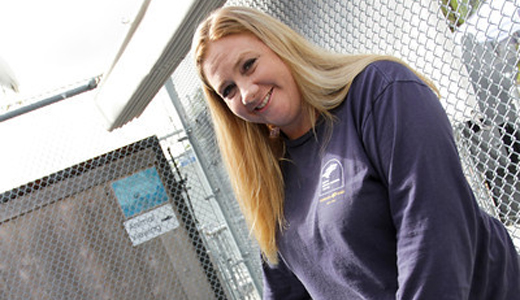 If it hadn’t been for her knee injury, she wouldn’t have discovered the Pacific Marine Mammal Center (PMMC) in Laguna Canyon. Kirsten Sedlick began as a PMMC volunteer and now, 18 years later, she is a PMMC Supervisor with an extraordinarily unique life experience under her belt. After all, how many people on this planet get to nurse sick and injured marine mammals back to health?

At 18, Kirsten Sedlick was a volleyball player on scholarship, bound for college. When her knee took her out of the game, she fell back on what she loved most: animals and the ocean.

Growing up in Newport Beach, Kirsten was the rescuer of every stray to come her way. She would agree to Mom’s rules – keeping the rescued stray in the garage – but somehow that stray would find its way into the family living room. She also remembers reading a Jacques Cousteau book on sharks and their primary prey, the Elephant Seal. At that point, she decided she’d be a Protector of the Elephant Seals.

Kirsten roams the large red barn hospital in Laguna Canyon, checking in on her sick seals and sea lions. She whips up Herring Smoothies and works with team members to herd recovering seals into the “small pool” for feeding.

Throughout, no matter what her activity, the seals pad after her and gaze up at her. She is oblivious; they are not. Inherently, these injured creatures seem to recognize what Kirsten is here for.

Kirsten heard of the PMMC when she was working at the Long Beach Aquarium, teaching kids about the universe that exists underwater. On further research she learned that the PMMC was responsible for the entire Orange County coastline in the rescue of Elephant Seals, California Sea Lions, Pacific Harbor Seals and some Northern Fur Seals. The PMMC rescues beached whales and dolphins, sea turtles and sea otters, too.

“What drew me here aside from the obvious … all these critters … was meeting John Cunningham,” says Kirsten “As soon as I started as a volunteer, he found me and chatted with me. He was so welcoming and so committed to the purpose here, and that’s what I try to emulate with all our staff and volunteers.”

Each Patient a Unique Personality

Averaging 180 patients a year; dealing with an alarming and exhausting onslaught of 373 patients last year; and enduring fire, flood, swarms of bees, famine, disease, poisoning, coyotes and more, you’d think Kirsten and her mighty PMMC crew are participating in an “End of Times” Hollywood movie.

“It’s never a dull moment here,” Kirsten says with a hearty chuckle. “Every day is different, and every patient’s story is definitely unique.”

The staff is trained to maintain an emotional distance from its patients, even while each patient hangs out for an average of two to four months. The goal, after all, is to release these wild animals back to the seas. While the staff purposely does not interact or make eye contact, they still name each of their incoming patients based on a personality feature, or an issue the poor thing is enduring.

“Big Bruce,” a recent Sea Lion patient with a Great White Shark bite, was named after the “Jaws” creature (nicknamed Bruce), and the “recovering” Great White in “Finding Nemo.”

Today, Kirsten and her crew are nursing eight patients, among them “Sir Edmund” (“we found him at the top of a cliff, which Elephant Seals really don’t do”), “Abalone” (who arrived on Kirsten’s birthday, Valentine’s Day, and was discovered on a bed of abalone), and “Otter Pop,” (simply “slick on wheels”).

As she thinks back to her favorites, Kirsten mentions Bismarck (a Sea Lion missing both rear flippers), Fiddler (rescued from the top of a roof in Newport Beach), and Captain Hook, a Sea Lion who arrived with more than 70 hooks and lines imbedded in his skin and flippers. He was rehabilitated and eventually released, only to be rescued seven days later toting more hooks and wire.

“He was like some kind of magnet, the poor guy,” Kirsten commiserates. On Captain Hook’s second release, a Coast Guard ship did the honors of depositing Sir Hook on the far side of the Channel Islands, and he’s been hook-free since.

Kirsten stands in the PMMC hospital wing’s kitchen, whipping up Herring Smoothies for her critical care patients who must be tube fed. She points to individual doctors’ charts, each denoting the name of the patient, a series of progressive photos, its weight gains, and its own unique recipe concoction of said smoothie (some parts Karo Syrup, some parts Milk Matrix, some parts Pedialyte, all parts Herring).

“We’re not an assembly line here,” she says. “Each patient has its own unique Smoothie requirements,” says Kirsten.

Has she ever tried a Herring Smoothie? “Uhmm, purely by accident,” she laughs, admitting that she’s never been a fish eater to begin with.

Accidentally ingesting a Herring smoothie is not the first surprise Kirsten has encountered in her 18 years. When raging fires swept down Laguna Canyon in October 1993, all hell broke loose. “We have rescue and removal plans,” says Kirsten. “It was so fast and so sudden, though, that we were moving patients into the back seats of our own cars to evacuate.”

In the Christmas flood of 2010, PMMC thought it was ready for the worst. No one, however, expected the hill behind the facility to break loose and tumble down onto the PMMC.

“I got a call at dawn, and my people were telling me it was complete devastation,” says Kirsten. “When I finally managed to get here, I could hardly recognize our hospital.”

Fortunately, amidst all the mud and rising waters, every patient survived. The PMMC shipped its patients to Ft. MacArthur in San Pedro and got to work. They spent the next long month digging out the pools, replacing the entire laboratory, and receiving loads of supplies and calls from locals who thought the whale bones that had washed downstream might belong to them. (Indeed, the whalebone display had gone missing.)

“Most of us worked night and day because we missed our patients so much,” says Kirsten. “It was an eerie place without them.”

Saving 373 Critters in a Single Year

The memory of that silent hospital reversed on a dime when early 2013 saw an epidemic of sick seals and sea lions begin to arrive. “We had our usual 7 patients in December, and then had 17 in January and 30 in February,” says Kirsten. “Then in March, we had 112 new patients. It was … daunting.”

Far beyond the fires and floods, the 2013 epidemic that sent hordes of sick marine mammals to the PMMC was the greatest challenge Kirsten has dealt with yet. “At one point, we had 167 patients here, and it was endless 20-hour days just to keep up on each of their feedings four times a day.”

The PMMC hospital became something more like a MASH triage unit. Kirsten was in charge of organizing the volunteers and staff around the clock, and helped with tiered triage decisions for each patient as it arrived. She, herself, tube fed 60 and 70 malnourished seals a day while singing lullabies over the phone to her toddler who wondered where Mommy had gone.

“We had Laguna animal control officers, park rangers and lifeguards helping us with as many as 13 rescues a day,” says Kirsten. “Our administrative staff upstairs was down here in the trenches. It was an awesome community commitment.

“Every day I know this – but it’s the worst times that remind me that I’m really making a difference. How lucky am I to call this my job?”