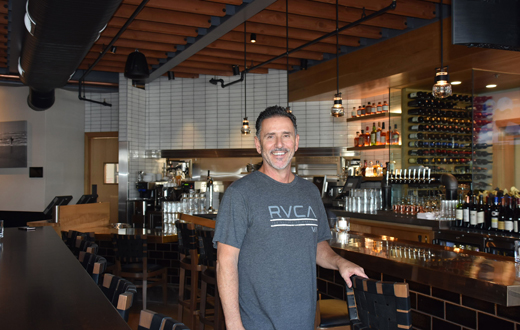 What a difference four … I mean six … I mean nine months makes.

In the same gestation period that brings a newborn human to this planet, Restaurateur Scott McIntosh has finally succeeded in opening his doors of Reunion Kitchen in North Laguna’s Boat Canyon.

Back in January, 2016, I wrote about McIntosh’s return to Laguna Beach, first with his planned opening of a reborn, more compact Asada in Boat Canyon (which opened several weeks ago), as well as his plans to bring his uber-successful Reunion Kitchen concept to the same shopping strip.

“We always felt like Laguna was our home,” says McIntosh with wife and restaurant partner, Rose, sitting at the new Reunion community table. “It just took us longer to get back here than we initially anticipated.”

The vision, however, has come to fruition. 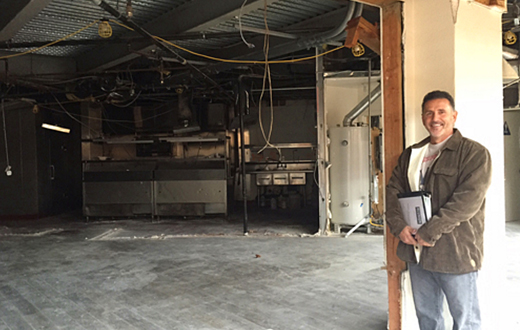 In January, when I first took a photo of McIntosh in the shell that would become Reunion, he smiled gamely among concrete pillars, hanging electrical wires and a tiny kitchen destined for complete renovation.

Now, nine months later, every aspect in this successful restaurateur’s head is now reality, from the architectural bronze bar (imported from Germany) to the opened-up, expanded kitchen, to the giant indoor “patio” with equally giant windows that silently roll up for breezy Laguna love.

Where once a cramped bar stood back in the corner for the former Umami Burger space, new seating has been installed with a large mirrored wall that also reflects bronze-y and black elements. McIntosh tells me that the mirrored wall pays tribute to his formative years when he and his brother played in a downstairs rumpus room with a 1970s mirrored wall much like what adorns this revitalized restaurant space.

The “historical” personal bit melds well with Reunion’s artwork, all of which reflects historical Laguna Beach (most with some humor). McIntosh’s humor extends to small touches throughout the restaurant, including the women’s bathroom door sign. (Sorry, you just have to visit to see it in person or check out my Facebook page.)

This place is full of gadgetry that shows a longtime restaurateur’s experience. My favorite gadget? Behind the kitchen in the service hallway, great, shining beer lockers house hundreds of gallons of perfectly chilled beer. Their piping rolls under the restaurant and back up into the bar to service ten beer taps installed there. From beginning to frothy end, it’s a work of art. 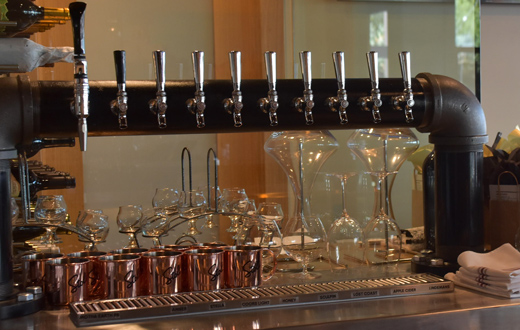 In these closing days of September, McIntosh’s smile is just a little wider. He’s excited, practically vibrating with the energy of those last few hours before flinging the doors open once and for all.

He and Rose talk animatedly about their staff’s return to Laguna Beach … nearly 40 people followed Scott and Rose from Laguna Beach to Reunion Kitchen in Anaheim Hills three years ago, and now more than 20 have followed them back to help staff these smaller renditions. 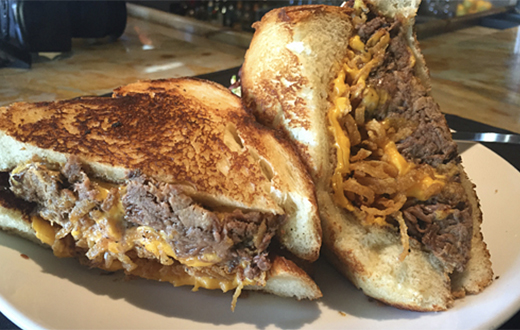 “We think our food will stand the test of time, but the strength of the brand is in the strength of the people,” says McIntosh. “Reunion Kitchen is built for Laguna Beach locals, and every one of our people knows it. We’re here to bring back that social, warm, cozy feeling that Laguna locals love sharing with each other.”

Indeed, Reunion Kitchen is the reunion everyone in Laguna Beach has been hoping for.