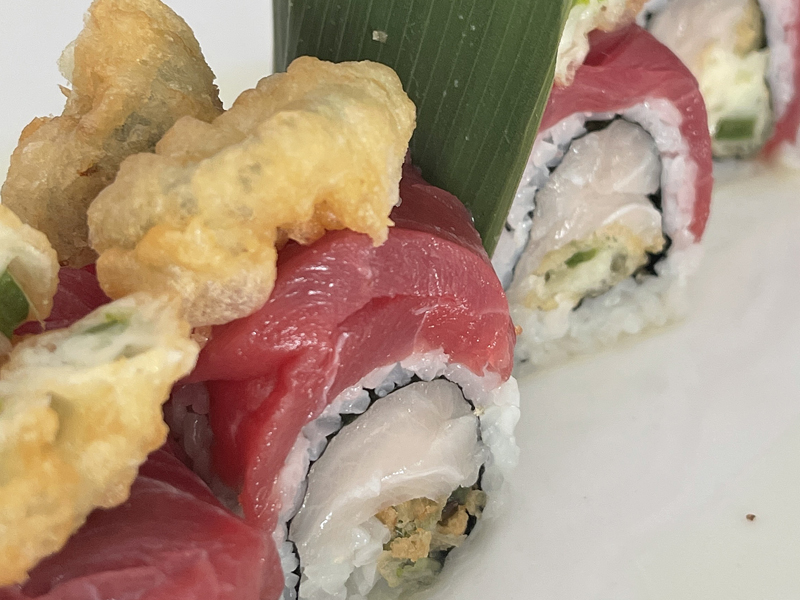 Owners George and Angie Fratkin opted for a week of soft opening evenings but, as the Laguna Beach local coconut telegraph goes, it turned out to be a fairly busy week.

“We’ve had such a great few days with all the charming locals,” George told me. “We’re in love already.”

Consider that love mutual, George. After trying eight different sushi dishes on Tuesday night, I’m happy to report that this is one of the most unique and lush sushi events I’ve yet experienced.

A Bold Beverly Hills Start Up

Three years ago, George and Angie hadn’t even thought of owning a restaurant. “We were happy in our careers but we both had this opportunity to make some changes,” said George. “So, we decided to try something really out of our comfort zone – opening a restaurant.”

Although they had no operational experience, they knew they had to fulfill one primary goal: Create a sushi experience for sushi afficionados just like them.

The couple opened Seabutter in Beverly Hills in November 2018, and in a matter of weeks, the place was rocking.

Although the couple wasn’t necessarily thinking of expansion, George admits to saying that if they ever opened a second restaurant, he would want it on or within walking distance of a beach.

“We somehow made it through the worst of Covid, and just when we were thinking we could take a breather this spring, maybe take a vacation somewhere, one of my friends sent me the listing for the Laguna Beach sushi restaurant,” he said.

“We hadn’t even been thinking of Laguna Beach, but I had great memories visiting there as a kid, and we thought we’d just drive down and take a look. As soon as we walked in the place, I knew we had found our second restaurant location,” said George.

They made a fast decision at the end of May and began putting all the pieces in place for a 45-day opening calendar. They quietly opened here on Friday, July 16th. 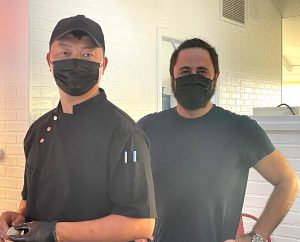 Seabutter specializes in thinking outside the box.

“People may love yellowtail or yellowtail belly, but they don’t know about how mild and awesome Amberjack is,” said George.

“Or they may have tried Albacore but haven’t had the pleasure of trying Albacore Belly. And, if they like Uni, we’re one of the few places that will carry two or three or four types of Uni from different parts of the world, so you can try them all in a tasting in a single evening,” he added.

I love sushi, but I wouldn’t consider myself an afficionado. So, on Tuesday I gathered my sushi pros – Greg and Terri Smith – and brought them along for dinner.

The Seabutter team may still be dialing in a bit of artwork and finishing touches, but the most important pieces are firmly in play – fantastic and friendly sushi chefs and an extensive menu of fabulous options.

The lead Sushi Chef Peter Moon greeted us, and we told him we were going to rely on his recommendations.

On a side note, a couple weeks ago, one of my dearest friends popped into town and dialed me up to meet for coffee. He’s an avid fisherman with a home in La Ventana on the Sea of Cortez, so when I asked him what fish he prefers eating these days, he promptly replied “Amberjack.”

Although Amberjack is often mistakenly marketed as part of the tuna or yellowtail families, Amberjack Kanpachi comes from the Seriola line. It’s a lean, flaky fish with a mild, sweet and buttery taste. I’ve never tried it, so when Chef Peter mentioned it, I made that our first Seabutter foray. 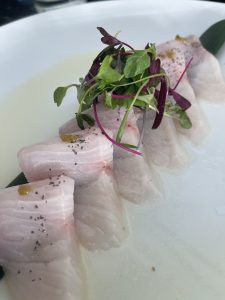 What an introduction! The lightest of lime juice drizzles complimented this beauty. I would have been happy eating multiple servings of this dish – it was spectacular.

It only got better from there.

In a matter of minutes, we were on to Crunchy Onion Albacore which featured Albacore Shiro Maguro, essentially Albacore loin, another rich and mild offering. A haystack of freshly fried onion slivers served as the bedrock, and the mix of tang and buttery sweet was perfection. 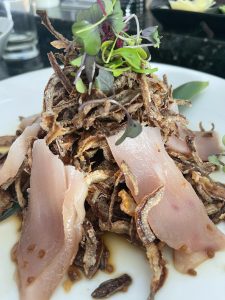 Lean and flavorful Albacore on an onion haystack

Next it was a beautifully colorful dish of the freshest Ahi Tuna topped with a jumble of enoki mushrooms sauteed in a truffle mushroom sauce. As it turns out, my fellow sushi buddies are not truffle oil fans, so I polished the entire plate off myself without apology. 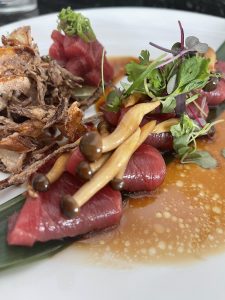 We moved on to beautifully presented dishes of Tuna & Toro, Yellowtail Belly and then, Albacore Belly (for comparison purposes). All three dishes were fresh and colorful presentations with a focus on the fish above the usual filler rice. 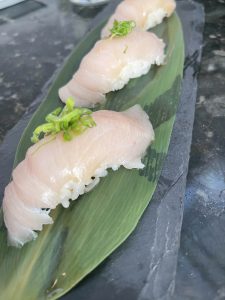 At that point, my fellow spicy food fans were over the moon with Chef Peter’s fantastic roll, the YTJ, a combination of Yellowtail, Tuna Sahimi and Jalapeno Tempura with Yuzu sauce. Where jalapeno can become quickly overpowering with fresh sushi, the tempura kicked the temperature down to a companionable, tiny kick.

With seven dishes shared between us at this point, there wasn’t much room left. Greg, however, wanted to try a token hand roll, so we asked Chef to provide a “light” one.

He complied, serving us three seaweed paper rolls stuffed with blue crab, a smattering of white rice and crunchy cucumber. We each finished every bite. 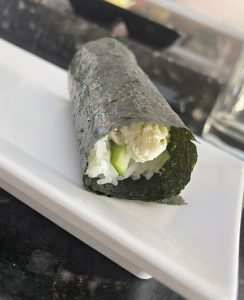 Of course, George wouldn’t let us depart without trying their homemade Mochi Ice Cream Balls. This time, we insisted on receiving a shared platter and in moments, we were digging through three just-right servings of fresh peach, strawberry and rich chocolate options. It was the perfect ending to an absolutely perfect evening at Seabutter. Homemade Mochi finishes a perfect evening. On this evening, the restaurant was featuring peach strawberry and chocolate.

Note: As of this writing, Seabutter Laguna Beach still hasn’t received its liquor license, even though it’s a rather simple transfer that’s been in process for several weeks. While the owners expect this to come through any day, don’t let this deter you from trying this gem before the rest of the world swims into Seabutter.