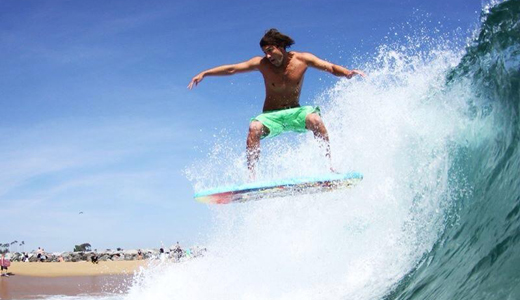 Between international contest jaunts to places like Brazil and Angola, pro skimboarder Morgan Just is upping his local visibility in one-on-one and group skimboard and surf lessons.

This is not tiny news.

For starters, Morgan “Mo” Just has been a bonafide skimboard pro resident here in Laguna Beach for many years. Admittedly, the most exciting talent and skill comes from the pros that have been living and skimming in South Laguna Beach. This should come as no surprise, actually, as West Street Beach is considered the worldwide fountainhead for skimboarding, period.

So, with Mo as your instructor, you have geography on your side.

After photographing these guys for about eight years, even this amateur knows what each pro skimboarder does best. For Morgan, it’s all about creating where no one has created before.

Many a time I’ve sat in my warm condo overlooking West Street Beach in the dead winter months while Morgan spends hours on the beach down below, his skin bright red from the cold (he rarely deigns to don a wet suit). Frostbite issues are a minor deal because he’s working out his newest tricks.

As unassuming and friendly as they come, Morgan is an absolute leader in the technical game. He has created a number of step-by-step skimboarding lesson videos, both independently and through his sponsors, one of which is Victoria Skimboards, the grand pappy of them all. On his Monkey See skimboard basics channel, Morgan has more than 1 million views. The guy definitely knows how to teach, from beginner basics through advanced pro skills.

So, you have organized teaching skills on your side, too.

Whether it’s a surf or skim lesson, Morgan provides all the boards. While he usually works from South Laguna beaches (West Street to Thalia), he’s flexible depending on student location. To begin your new sport or improve your game in the water, e-mail mojust88@yahoo.com to get it right the first time.