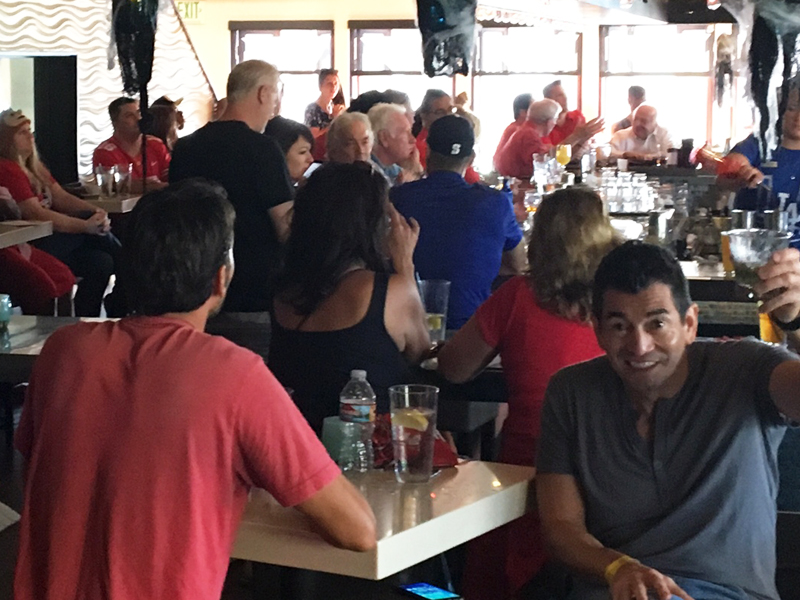 Last year as the college football season rolled into play, Skyloft hoisted a flag that caused quite a stir – an Ohio State Buckeyes flag, a mere 2,250 miles from the famed Columbus, Ohio Buckeyes stadium.

While it took residents and visitors by surprise, it certainly didn’t deter the hundreds of OSU Buckeyes fans who began to appear out of the woodwork to watch every football game in Skyloft’s main level bar.

What started as a trial run turned into a sea of happy red as both alumni and fans showed to cheer the top-ranked team on.

Now, Skyloft is officially is a designated game watch location of the Ohio State Alumni Club of Orange County, and the flags are proudly flying for a second season.

Kickoff Party Tomorrow
Festivities begin tomorrow, Saturday, Aug. 18th as Buckeye fans are invited to a Tailgating Kickoff Party from 2:00 – 4:00 pm. OSU Buckeye fans will be reconnecting and talking shop while enjoying special pricing on their own OSU menu of food and specialty drinks, which has expanded from last year’s menu.

The best-selling Warm Pretzel with beer cheese sauce, Buckeye Burger and Bacon Nachos (the latter aptly titled TBDBITL with just one word (band) replaced with the word “bacon,”) will be returning players. And, OSU fans will see an expanded drink menu with very special drink prices that play to early morning and late afternoon crowds.

Then, on the morning of Saturday, Sept 1st, Skyloft doors open early at 8:30 a.m. for OSU Buckeye fans intent on seeing the inaugural football game as the Oregon Beavers make a visit to the (somewhat overwhelming) OSU stadium. Game time is 9:00 a.m.

This year, Skyloft is adding an OSU-wise DJ who just happens to know ALL the songs and when to play them, adding a happy “skybox” dimension to the Laguna Beach-based virtual stadium.

The OSU Alumni will also be setting up a mini shop each week with t-shirts, sweatshirts, caps and more, and will be hosting weekly raffles as well.

In college ball, the networks only set start times for games a few weeks in advance. Right now, just the first three Buckeye dates and times are set. Check out these set dates and well as OSU Buckeye updates in my calendar section at my blog, TheBestofLagunaBeach.com

Skyloft was the first South Orange County restaurant to fly Ohio State colors. Director of Operations Jonathan Moore notes again that his restaurant will only fly those colors. It seems that many restaurants and bars change out college flags daily to entice a day’s procession of varied football fans, but that felt like cheating to him.

“We love all our college and NFL fans and we have plenty of TVs to show plenty of games. We welcome all makes and models,” says Moore. “But now that the OSU Buckeyes fans have embraced us, we really feel like family. We’re happy we made this decision last year, and we’re looking forward to an even bigger year ahead.”