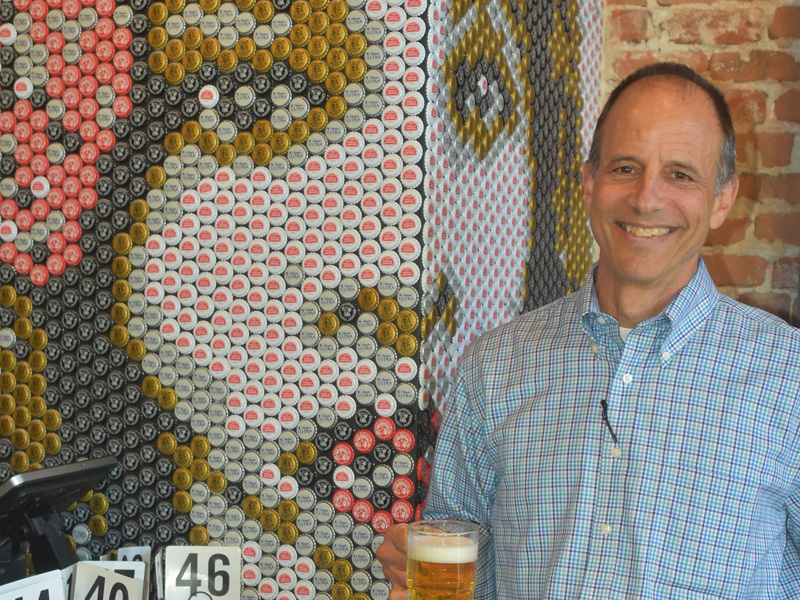 I love the way our Laguna restaurateurs love their restaurants.

Last week, I met with Cary Redfearn, who will be celebrating the 1-year anniversary at Slice Pizza and Beer, the crafty concept restaurant he and wife, Suzanne, concocted. It sits directly across the street from their initial restaurant here in Laguna, Lumberyard.

This Friday, Oct. 19th, Slice will be celebrating its 1-year anniversary by offering a selection of its signature 11-inch handcrafted pizzas for just $6. The offer runs all day, 11 a.m. – 9 p.m.

“It’s our way of thanking all our locals and repeat guests. There’s no way we would have made it to this year mark without them,” says Redfearn.

Fast Casual Catching On
Cary walked me around the place like a proud papa, and well he should be. He and Suzanne are one of the few restaurateurs at the forefront of the “fast casual” concept restaurant in Laguna. Concept restaurants are more popular in larger urban areas where you’ll find plenty of “return traffic” people with a singular craving for your kind of food every day. In a tourist-oriented town like Laguna, it can be a bit of a dicey risk to undertake. 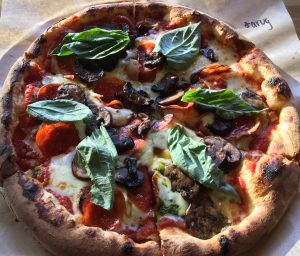 Cary, however, is a diehard L.A. restaurant escapist. He regularly bolts to The Big City with a studied fascination of concepts popping up in food trucks, the LA marketplace and in traditional restaurant space. He knew it could work here.

Farm Pulleys and Scrabble Boards
Over years of avid research, Cary became enamored with authentic Neapolitan pizza, even attending pizza school in L.A., and hiring an “authentic” pizza mentor who had crafted his skills in none other than Naples, Italy, the birthplace of the iconic pizza dough.

With Suzanne as the architect of the space, the couple ordered a gas-fired, custom-crafted  7000-pound Mattafornia pizza oven, which was created in Italy (of course), eventually shipped to Maryland for assembly, and then trucked to Slice Pizza’s soon-to-be front door.

While they waited for the mother ship to arrive, Suzanne set to work on crafting her own lighting fixtures from eBay old pulleys and dreaming up a titanic task for herself – assembling more than 15,000 individual Scrabble tiles into a variety of phrases and words for the bathroom’s walls.

“She had them on big boards on our living room floor for about six months,” says Cary. “She did not take kindly to our attempts to step over them, either,” he added.

A Respectful Nod to Regional Artists 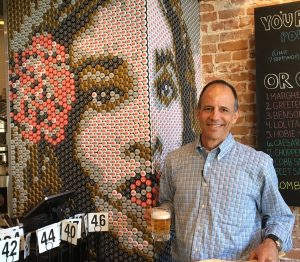 In further nod to Laguna’s artistic foundation, the Redfearns brought in Shepard Fairey to create a mosaic from beer bottle caps (Fairey decided how many of each color he needed and put Cary in charge of finding the 4,500 caps).

And, on Slice Pizza’s street-facing wall, the couple brought in another international master, Colette Miller, to craft yet another of her rare angel wings for her renowned Global Angel Wings Project.

They also chose to custom craft their pizza boxes, choosing Cindy Fletcher’s art for their first year’s business. “We’ll select a different artist for next year’s boxes,” says Cary. “We just thought it would be kind of cool to be able to walk around town with real Laguna art on your pizza box.”

It’s … Really … All About the Dough
In the kitchen, Cary had plenty of work to do, too, initially wrassling with a high-maintenance dough recipe with a mind all her own (high stress), and crafting an extensive Subway sandwich-like bay that allows clients to individually craft their pizzas and salads (creative stress).

In the end, just four people know how to custom-create Slice’s daily dough, changing up the specific ingredients to ride with Laguna’s daily change in humidity, atmospheric pressure and the earth’s rotation in relation to the moon.

“It’s a living beast,” says Cary sotto voce, rolling his eyes carefully so that the dough doesn’t hear or see. “The dough taught us how to understand our dough. We pay homage to it every morning.”

Toppings, Toppings, Toppings
On a lighter note, you’ll find that this is no ordinary assemblage of pizza restaurant toppings, either. More than 60 premium ingredients at Slice Pizza dare you to decide on just how much you’re willing to load onto a single pizza or salad.

For starters, Cary worked through more than 50 tomatoes and sauces before deciding on Bianci DiNapoli organic tomatoes for his sauce. 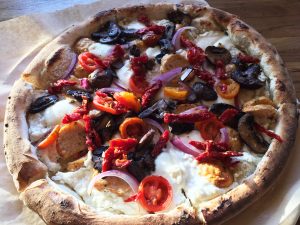 Not interested in tomato sauce? Try the fresh pesto or the herbed ricotta sauce, both made fresh at Slice.

Most of the cheese options are provided by Angelo & Franco, two guys who decided that mozzarella needed to be hand crafted once again by hand … they began the entire operation with Italian women who had been hand-molding mozzarella for decades.

All told, there are eight cheeses to choose from, including daiya cheese (vegan). 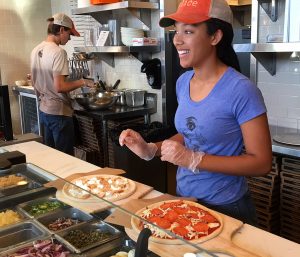 Then, it’s a vast array of meats, including Soppressata (an Italian dry salami that you will be hard pressed to find in any other pizza-making shop), Rosemary-infused ham, paper-thin Prosciutto, chicken sausage made in house, thick chunks of smoked bacon, the finest peperoni and more.

From there, we move to vast numbers of vegetable options, which can be loaded on both pizza and salads.

“I’ve seen it all,” says Cary. “Some people put beets on their pizza and others try garbanzo beans, which just roll around like little golf balls on a pizza … but it’s their pizza, and that’s the way they want it.”

Finish your craft invention and your pizza is popped in the 750-degree oven for about 170 seconds (around three minutes). A finishing station adds on the delicate delectables that shouldn’t be scorched, i.e., the Castelvetrano olives, seasoned cremini mushrooms baked separately on sheet pans, fresh basil leaves, prosciutto, etc.

Then, head on over to yet another of Slice’s creative innovations – The Beer Wall. On a nearby shelf you’ll find a number of mismatched glasses to choose from – Suzanne regularly drives to the Orange Circle to hunt down these creative odds and ends.

With a sort of wristband on radio frequency, you can dial up any one of 14 craft beers or four premium wines. Sample one or several; it’s entirely up to you as a single purchase earns you up to 32 ounces in beer tastes and 12 ounces in wine.

Don’t think you’ll be able to find even one beer you prefer? Give it a week – Manager Danielle changes it up with creative vigor (and no, none of the beers offered at Slice are featured at Lumberyard.)

Not interested in alcohol? Try the Coca Cola machine that allows for 165 options, including your own Freestyle App recipe that you create on your phone, hold to an icon on the vending machine, and see the spigot obligingly pour.

Wedged firmly in the Laguna restaurant profile
“Slice ending up being our labor of love for the town,” says Cary. (We’re not going to remind him of the love-hate relationship he has with the dough.) “Ten years ago, we decided to create Lumberyard because we lived here and wanted to create a gathering place for the community,” he says.

“We weren’t sure how Slice was going to be received. As it turns out, it’s an entirely different world over here, even though it’s just a few feet from the other restaurant. Slice has come into its own kind of fun, laid-back personality and it’s the locals who are making it the way it is. We’re really enjoying the co-creation.”