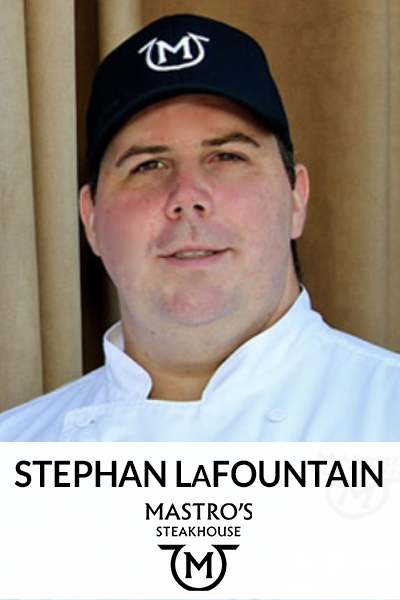 Q: This will be your 5th year at OC Chef’s Table. Why do you keep returning?
Chef Stephen LaFountain: There are other charities focused on homelessness, but Illumination

Foundation has done such a great job focusing on families … children especially. I have three children myself, and the thought of anything happening to my children if I was never around propels me to continue to support what Illumination is doing. Your life can change in a moment, and many of the people out there have ended up on the wrong side of that kind of moment.
And, Disneyland® brings its own magic to the event. They’re obviously so supportive of children and families, and that’s a big factor for me, too. It’s just an all-around spectacular and memorable evening.

Q: What made you decide to become a chef?
Chef Stephen: I was that introverted kid who got picked on a lot at school, but I was fortunate to find a great crowd of friends in high school, and I started to come out of my shell. When I got my first job at a restaurant, I realized it was a sort of fresh start – I could be anyone I wanted to be. So, the outgoing part of me that had always been there finally started to show up. I loved the community in the kitchen and the community that arrived as clientele at the front door, and I found I had a knack for cooking. It was a perfect fit for the “new” me.

Q: What were you doing prior to Mastro’s?
Chef Stephen: Once I started in restaurants, I never left. But, when I was 21, I broke my back in a car accident, and I laid in bed for a year until I learned how to walk again. Initially, they told me that I’d never walk again … and then they updated the diagnosis, telling me that I’d end up in a wheelchair by age 40. That plan definitely did not work for me. So, I just kept working at it every day, and working on recipes, too. I had so much more gratitude for my life as a chef when I was finally able to return to that life.

I started working with the Cameron Mitchell group in Ohio and worked my way up from line to executive chef in about a year and a half. I ran all the stations and closed for all the chefs because I was determined to get a sous chef position. The executive chef position a few months later was a surprise, and I helped them open restaurants everywhere. They were a great group to work for.

They sold all their fish markets and steak houses in 2006, so in 2008 I moved out here to California to work for the LeMeridean Delfina in Santa Monica. It was quite a culture change! I worked for a couple other large entities and found my way to Mastro’s. In that timeframe, I met my wife and had three kids, so it’s been a fast moving timeline.

Q: What lessons from your year on your back did you take into your kitchen?
Chef Stephen: Patience! When you’re an impatient person … who’s now flat on your back for a year… you have no choice but to learn patience. It’s helped me enormously with my kitchen staff, my patrons, even my kids.

And, I learned to listen more.

And, I think I finally learned the meaning of “teamwork” from that situation. One thing I’ve noticed … if you have a really defeating injury, once it gets you laying down, atrophy sets in – in both your body and your mind, which just makes everything worse. I think I’m better now at recognizing when my team members might be struggling. You want to help them before they’re feeling like they’re flat on their backs.

It’s probably why I feel an empathy for people who are experiencing homelessness – it might just be about getting to a point where you don’t think you can get up again. The people at Illumination Foundation stop the atrophy and help these people turn it around, get back on their feet. Because I have an inkling of how that physical and mental atrophy can eat away at your life, I’ll do anything I can to support what Illumination Foundation is doing.

___________________
The top chefs in Orange County (along with a few surprise visiting chefs) are getting together again for the renowned OC Chef’s Table at Disneyland® Resort on March 1, 2020 to provide permanent housing and services for homeless adults and children. With OC’s most imaginative chefs creating one-of-a-kind magical menus, it’s no wonder OC Chef’s Table is one of the most coveted gala tickets of the year.
See all 40+ chefs participating and secure your ticket at OCChefsTable.com. And, get to know this year’s phenomenal chefs as Diane Armitage sits down with each, asking 5 questions in just 5 minutes …