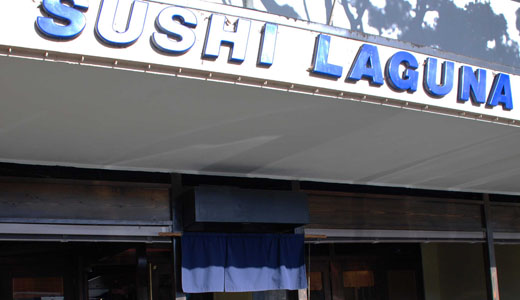 About 14 years ago, my first friend in Laguna Beach, Lisa, took me to lunch at Sushi Laguna on Ocean Avenue. On her strong recommendation, the “Monkey Balls” was my very first order.

I have not been the same person since.

Now, granted, Monkey Balls are one of the baked items Owner and Chef Jay Sada has devised, but his sushi, sashimi and endless number of rolls are just as memorable. 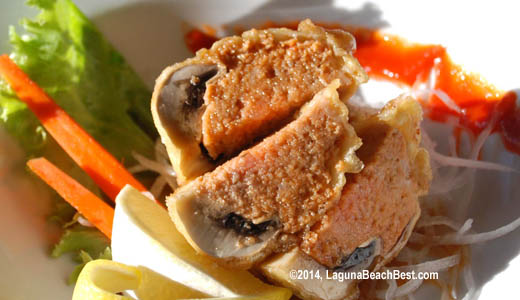 The First Rule of sushi? Freshness. I’m sure we’ve all had that one bite of sushi somewhere along the way that’s nowhere close to fulfilling “The First Rule.” This is why I’ve been a tried and true fan of Sushi Laguna all these years. After testing at least 50 creations from Owner and Sushi Chef Jay Sada, I have to say I can’t remember a bite that was even slightly south of perfect freshness.

The Land of Opportunity 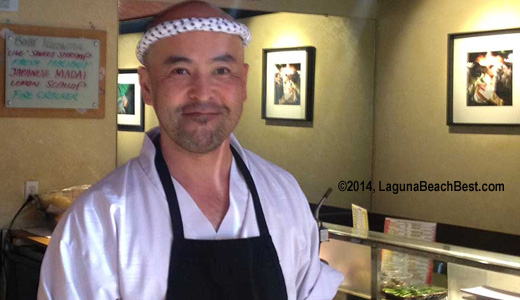 Oddly, it wasn’t until this week that I actually sat down and chatted with Chef Sada. Usually, I see him as one of the longtime sushi chefs, rapping, clapping and keeping the energy high as he and his team creates common and extraordinary creations.

Raised in Fukuoka, Japan, Chef Sada learned the art of sushi chef at the age of 16. Years later, and on the suggestion of a good friend, he decided to pursue “greater opportunity” in the United States, and emigrated here at the age of 21.

He arrived with one acquaintance in L.A., and no English skills whatsoever. The friend dialed Chef Sada into a boarding house, and Sada purchased a television to help him learn English.

“I knew absolutely NO English. So, my friend came over one night and wanted me to go out for dinner, and I said, ‘I’m not sure. I’m studying English on the TV,” says Chef Sada. “And my buddy cracked up and said, ‘But you’re watching a Spanish program.’

“That’s how bad my English was,” says Chef Sada. His face splits into a wide grin and in that moment, you know why his entire staff stays for years with this man. His sushi chefs alone have withstood the test of time: Yasu and Gustavo for more than 10 years, and Oscar just passing his 6th anniversary at Sushi Laguna.

A Commitment to the Freshest Fish

Initially working as a sushi chef in Seal Beach, Chef Sada moved around O.C. and even into Aspen, all the while looking for a restaurant in Orange County to call his own. The Ocean Avenue space opened in 2001, and Sushi Laguna was born that autumn. His was the fifth sushi restaurant in Laguna.

“We’ve survived all the ups and downs because our fish is very fresh,” he says simply. “I’ve been a sushi chef now for 28 years, and I worked in some restaurants that thought it was OK to keep fish for two days or more. I don’t do that. If it’s more than a day old, it’s in the trash

“I have to plan very carefully so that we’re not throwing a lot of fish away, but it’s worth the extra effort. Our regulars appreciate the effort.”

Japanese, Chinese and Thai Cuisine All Together Now

Indeed, they do. Rain or shine, winter or summer, Sushi Laguna packs in a healthy lunch crowd, and waiting lines are common at the dinner hour. Even in the height of the summer season, Chef Sada estimates that at least 80% of his crowd is made up of die-hard regulars, and they file to their favorite seats like obedient children in a classroom. This is a friendly, boisterous place and the energy is contagious. Happily, the food is just as energetic. 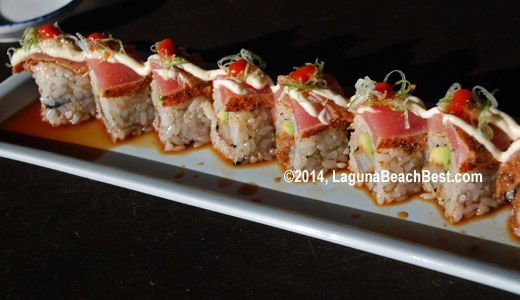 While the drink menu is not excessive (six Japanese beers, a handful of sakes and wines), the dining menu is packed with an amazing number of options for people not interested in raw fish … 10 salads, 3 miso soups and 8 noodle soups, 8 vegetable dishes, 23 seafood dishes (including the best selling Salmon Tail and Yellowtail Cheek dishes), 10 chicken and beef dishes … the list goes on.

It’s a happy meld of regions and spices and, while the dining menu is clearly overshadowed by the sushi preparations, it takes no backseat in flavor.

Take, for instance, the Negimake Beef dish, a popular rib eye wrap coddling grilled scallions and asparagus and served with a garlic teriyaki sauce. It simply melts in your mouth. Or, try my favorite “cooked” dish, the Monkey Balls – deep fried spicy tuna serving as the stuffing in mushrooms.

“Many of our customers will ask for a certain kind of dish and it will end up on the menu,” says Chef Sada. “When I worked in Huntington Beach, one of my regulars came up with the Monkey Balls idea. I’ve featured them on every menu ever since.”

Now that you’ve waded through the Sushi Laguna Dinner Menu options, turn your attention to Sushi Laguna’s freestanding table tents featuring more than 65 rolls. Or, try tackling the long sheet of sushi, sashimi and hand roll options with your little golf putt-putt pencil. You could conceivably eat from these two menus alone, choosing just one item a night, for a year and a half. 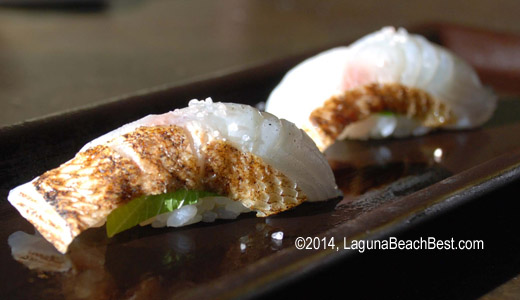 Given that I can usually eat half a sushi roll in a seating, I suggested that Chef come up with just one sushi item that’s one of his favorites. He delivered Thai Sushi, a creation of raw shrimp topped in a simple lemon juice, a couple secret spices and sea salt. It was delicate and super flavorful, and is now on my permanent menu.

As far as Sushi Laguna’s endless list of rolls goes, my go-to favorite has always been the Maui Roll (panko fried onion and avocado roll topped with Cajun tuna and jalapeno sauce) and the Salmon Lemon Roll (vegetables rolled and topped with fresh salmon and a thin slice of lemon with ponzu sauce).

Per Courtney, a darling Laguna Beach highschooler who began waitressing here four months ago, the Firestation Roll (veggies rolled and topped with tuna, garlic and jalapeno, then seared with a blowtorch) Crunchy Roll, Torpedo and Spicy Tuna Rolls are crowd favorites, too.

“The rice has to be good and fresh, too,” says Chef Sada. “It’s a combination of the two that makes the sushi something that people come back for.”

Obviously, at Sushi Laguna it’s a combination of something a little bit more.

A professional writer for 30 years, Diane Armitage is also author of the book, The Insider’s Travel Guide: Laguna Beach’s Best.