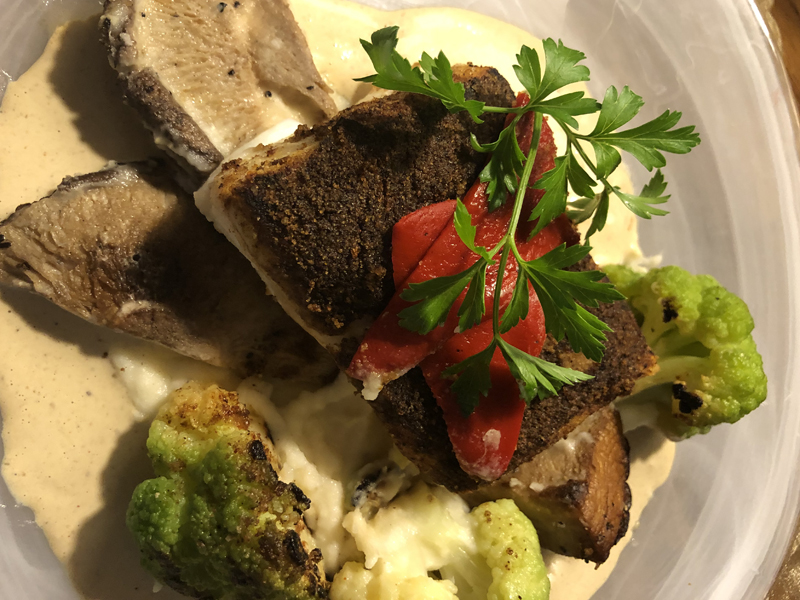 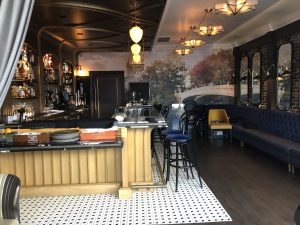 Exactly one year ago, I interviewed the founders of The Drake Laguna Beach who, after three long years, were putting the finishing touches on the city’s new posh jazz supper club.

They finally opened the last week of September, just when the City of Laguna Beach typically gathers its fruits and nuts and lumbers into its cave for eight months of slumber.

Six months later, however, even before the rousing process would begin for The Drake’s eagerly anticipated summer, COVID shut the whole game down.

“I used to play football and I think that’s the only thing that prepared me for this,” said Sous Chef Nick Gstrein. “It’s a crushing blow, but you’ve got to rally on the next run. You just get the team together and do some fast brainstorming and just run back on the field.” 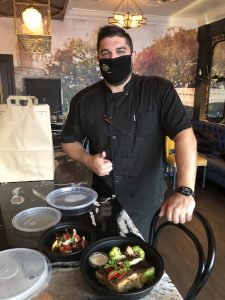 The Drake has proved an admirable contender through the sparest of seasons. This last winter, even during our usual hibernation period, The Drake  managed to pack in a solid crowd with nightly live music and an impeccable menu offered up by Nick and his dad, the notable Chef Paul Gstrein, who initially made a name for  himself in both Austria and L.A. definitive restaurants

When COVID hit, The Drake personnel counted themselves lucky for befriending the resident locals first.

“Our residents really came through for us, even the ones who hadn’t yet set foot in our restaurant” said Bar Manager Tony Prosper.

“They would call and say, ‘Hey, we’ve been wanting to try your food, but we weren’t able to get reservations when you were actually open, so can we try it now?’ It was refreshing to see that kind of support from Laguna,” said Prosper.

Prosper, a longtime mixologist of renown, began offering his entire signature Drake cocktail menu “to go” along with wine bottle specials at deep discount as an “all in this together” gesture. He still regularly publishes new weekly cocktail specials, all of which are bottled up in mason jars (just like the Roaring ’20s). 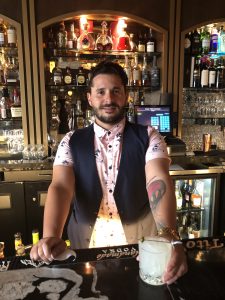 Drake Bar Manager doffs his mask momentarily for a pose with his “Sophisticated Lady” cocktail.

The team also kept their valet staff on the ‘Special Team,’ exclusively in play for deliveries around and about town.

“We didn’t want to hire a third party delivery service, because we wanted our patrons to feel really comfortable with us,” said Prosper.

“Our valets have a sense of ownership and team with us. It’s been a great way to keep them employed and connecting with our residents through this entire time.”

It Starts With a Tingle

This week, I decided to try my first Drake meal since writing about the opening last September (because I, too, had not been able to secure a reservation after their opening).

Given that we’re all heading into that lumbering hibernation period (God help us with the pounds we’ve already packed on in the COVID off-season), I thought I’d try a to-go order of what is usually a superbly plated work of art at The Drake.   As you’ve probably seen in my social media and observed in my article last week, the ability to transfer pretty food from a box, bag or mason jar to one’s own plates and glassware is key. I mean, we have to have our decorum, correct?

Meanwhile, I assured Chef Nick that I do not need any more carbs. He, in turn, decided on two salads and their best-selling special, the Wild Mushroom Crusted Halibut.

With the rare permission to trot inside the restaurant to talk with my masked restaurant personnel, I started first with Tony, the Bar Manager. He suggested I try the “Soph 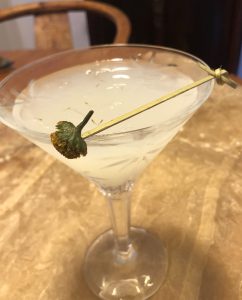 isticated Lady” cocktail, one of his perennial best-sellers for to-go cocktails.

The Lady is a lovely mix of Skyy strawberry vodka, fresh lemon juice and a dash of Cointreau, but her come hither is the honey-dipped Edible Buzz Szechuan Flower. Nicknamed “the Buzz Button,” this is a completely edible flower that makes your mouth comfortably numb (as Pink Floyd would say).

Chew on the entire tiny flower and your mouth begins to tingle. Take a sip of your drink, and you have an entirely new drink experience. It’s interesting for a Virgo who, even as a writer, doesn’t make much use of the word, “tingle.”

Initially bottled in said mason jar, the Sophisticated Lady makes a fine presentation in my own martini glass.

Next, it’s the Drake’s humbly named Burrata. While I’m not much of a dairy person by choice, Burrata has a tendency to steal around the end. If you’re going to indulge, for heaven’s sake, make it Burrata.

The Drake’s version is one of the most original I’ve tasted with the salty addition of Duck Prosciutto tucked into the Burrata fluff. Add in seasonal California peaches, heirloom tomato and hearty leaves of fresh basil, and this scores on all levels. 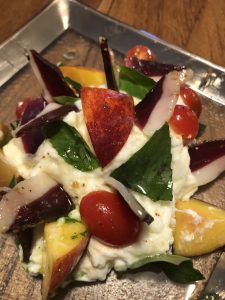 The Drake’s Burrata appetizer with fresh peaches and duck prosciutto

The take-out container neatly houses the hearty dish, even with a swath of basil arbequina olive oil at its base. For the reckless hostess out there, it transfers beautifully to your own plating as long as you have a rounded spatula that transfers in one fail swoop. 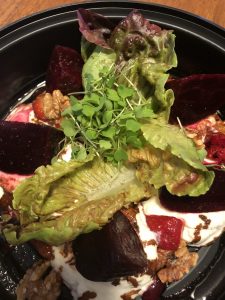 The Drake Beet salad might possibly belong in the dessert aisle. Other than the quartered beets and an added dab of fresh lettuce for scooping, there’s nothing in this dish that’s remotely calorie conscious.

I’m OK with that, folks.

This is whipped honey goat cheese with beets, strawberries and glazed walnuts. It should only be shared so that you don’t feel so guilty about inhaling it entirely on your own.

The chef’s line at The Drake does a much more phenomenal job plating this beet salad in its take-out container than I do in the transfer process. (The whipped honey goat cheese is not a fan of relocation.) It doesn’t matter. The dish is so good, you could spoon it out of a paper bag and be quite satisfied.

Then it’s the monthly signature Drake entrée creation. For the month of August, Chef Paul has re-introduced his Wild Mushroom Crusted Halibut.

For the record, I know we’re dealing with the weirdest August on record. Our wedding parties are cancelled, our college kids aren’t making us empty nesters any time soon, and we’re all being forced to revisit subject matter such as “new math” and how to get our airline refunds for the vacation we didn’t get to take in August.

The Wild Mushroom Crusted Halibut will make it all better. Trust me on this.

This is a beautiful, flaky, fresh filet dusted in the finest chop of mushroom in a plentiful amount of rub consisting of panko breadcrumbs, dried porcini mushroom, tarragon and other spices.

This time, I’m able to extricate the various plating pieces from the take-out container to create something that resembles a distant cousin to the artistic presentation that occurs on the restaurant’s busy outdoor dining patio.

Grilled green cauliflower and Shitake mushrooms tuck into the hearty helping of potato purée and buttery cream sauce. While they are all lovely additions, the halibut is quite capable of standing on a stage of its own. It is super-fresh, perfectly grilled to temperature, and withstands the trek between restaurant and home.

Tonight (Friday, Aug. 7th), The Drake will be re-introducing live music outside on its patio.

“In the lack of normalcy, we’re just doing what we can to help everyone feel a little more connected,” said Director of Operations Matthew Timmes.

Although the live music is only available on Fridays and Saturdays (for now), the restaurant has also secured the neighboring architect’s front patio deck for additional needed dining tables on the weekend. It provides quite an unexpected sunset view, adding another 20 seats to The Drake’s inventive patio play of game with its usual 30 seats.

Said Sous Chef Nick, “As smarmy as it may sound – as a team – we are committed to getting through this. And that’s not just us here inside the restaurant – that’s ‘us’ as in Laguna Beach. We all pull together now, and we know everything is going to be alright.”