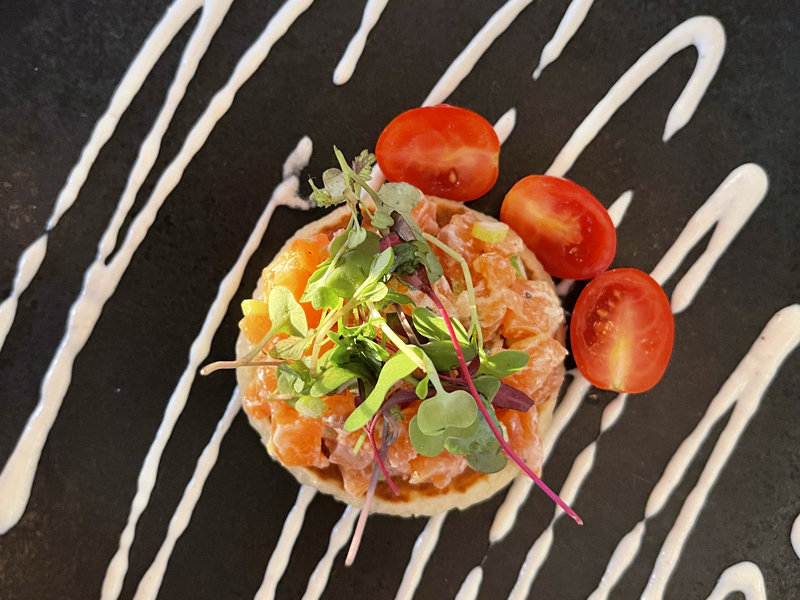 The Drake of Laguna Beach has just sailed past its second anniversary and is only increasing its velocity as it continues its graceful cruise.

Last Sunday night, I opted for The Drake for a post-birthday dinner with one of my best friends. Aside from ordering a couple take-out dinners during COVID, it was the first time I’d been back to The Drake since my review of its opening back in 2019. 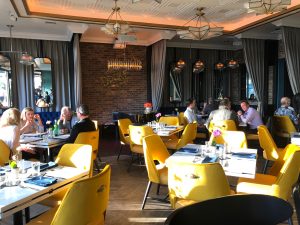 During their opening week, The Drake offered up one of the smoothest-running and most stellar food events I’d ever experienced during an opening. (Most restaurants are understandably a little shaky on those first few days as they get all the wheels rolling in the right direction and speed.) Fast forward to last Sunday night and they’ve only enhanced their stellar experience.

Stepping foot into another city, another time

As soon as you step foot in the Drake, you absolutely feel transported to another city and another time. This place is swank old school elegance, thanks to the unique interior design by Ken Ussenko, who’s also designing the Rum Social restaurant in Laguna’s Restaurant Row.

A dream of Founder Alex Glasser, the entire Drake Laguna Beach experience pays homage to Glasser’s fondest memories of working at The Drake Hotel in New York City. While that glamorous edifice has since been demolished, its storied history tells of celebrity across the decades, from Lillian Gish and Judy Garland to Marilyn Monroe, Muhammad Ali, and every major touring musician from Frank Sinatra’s Rat Pack to Jimi Hendrix and Led Zeppelin.

For years, the hotel’s lobby, restaurant and nightclub rang with the finest jazz, and it’s this memory, too, that prompted Glasser to create a classic jazz supper club in South Laguna.

The only father-son chef team in South Orange County

I asked to be seated at the Chef’s Bar, which is always my favorite in any restaurant. Sous Chef Nick Gstrein and Line Cook Christian manned the front while Executive Chef Paul Gstrein moved between stations where needed. This is the first restaurant for the father-son team, though Nick spent plenty of time in restaurants with his father as he was growing up. 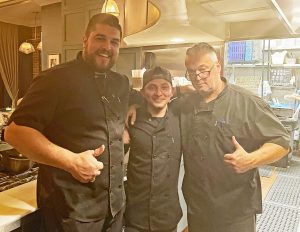 “I was a single dad, so Nick practically grew up in restaurant kitchens with me,” said Chef Paul when he stopped by for a chat. “Nick was a natural; he was always interested in cooking.

“It surprised me that he wound his way back into cooking as a career, but then it didn’t really surprise me,” he added with a cheeky smile.

Nick chimed in, “I went to UNLV for a degree in Hospitality Management, Food and Beverage but I didn’t go to a formal culinary school. I just learned by being in the family business for 400+ years. I guess at some point in gets in your genes.”

A Tasting Menu custom built to each individual diner

Even at our 6:00 seating (The Drake has two seatings each night at 5:30 and 8:15), the place was already packed with diners and the main stage was rocking with Jazz Pianist Ron Kobayashi as plate after plate was prepped and plated for delivery.

Chef Nick recommended the Tasting Menu, which offers a cornucopia of samplings from the main menu. Each tasting can be anywhere from 2 or 3 bites to a miniature dish of an existing entrée on the regular dinner menu. This seemed a perfect solution as just the first 5 minutes of watching the adept team prep and plate their many dishes made me want ALL of the dishes.

The Drake’s Tasting Menu is available on request. “The pricing varies a little, too, because I factor in food restrictions and number of courses,” Chef Nick told me. “No two tastings are the same. I tailor them per guest.”

In my experience as both indulger of tasting menus and working with kitchen and front-of-house staff when a Tasting Menu is in play, it’s always best to have your entire table order the Tasting Menu. This is only recommended by the restaurant, but it’s a great one to follow. Not only does this help with timing of all the dishes arriving to the table at once, but it puts a stop to that one person at your table eating a single entrée and then staring hungrily at the rest of you trying dish after dish on the Tasting Menu. 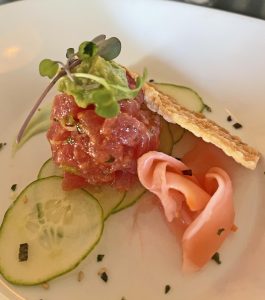 The Drake’s Tuna Tartar from the Tasting Menu

Chef Nick started us with an immaculately plated Tuna Tartare Tasting, a hefty dollop atop wafer-thin cucumber and wasabi emulsion with a companion wonton round for scooping. It was fresh, bright and just enough to have me feeling quite gleeful about what could possibly be next.

Moments later, the Sweet Heat Buratta tasting arrived, a hearty serving of the first peach slices I’ve had this summer topped with Speck proscuitto, parmesan and a careful dash of Calabrian Chili Oil. 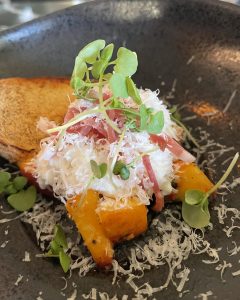 Then it was on to the most beautiful plating yet, the Smoked Salmon tasting (see large photo above) with the star of the show arriving from the Santa Barbara Smokehouse, seated on a lemon blini (a buckwheat pancake that originated in Russia and is typically paired with caviar). The crème fraîche was plentiful as it formed artful loops beneath the treat, and it quickly became my favorite of the evening … until more dishes trundled along.

Having now sipped our way through flutes of rosé champagne, Matthew recommended a Sancerre, a crisp, light wine from Loire, France, for our next few tastings. 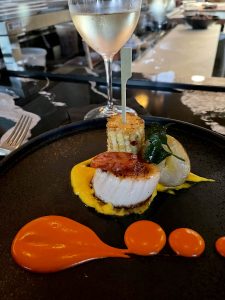 The wine whisked in just seconds before the Maine Diver Scallops tasting arrived. Yet another plated wonder, the perfectly seared scallops were crowned with a chorizo sliver that added a smoky, savory bite to the delicate scallop. A sweet corn purée underneath paired quite nicely with a grilled corn cobette.

Then, one of my all-time favorites arrived: a Lamb Lollipop, which is typically served in a larger appetizer offering. This particular lollipop was so hefty that it could have served as an entire meal for me. Expertly grilled to a medium rare, it was ladled on top of “spiked hummus” and surrounded with bright red pickled teardrop peppers. 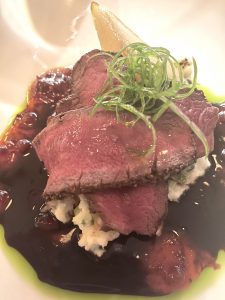 After assuring Chef Nick that we were pretty close to being stuffed (understatement), he noted that he had just one more dish arriving – the restaurant’s very popular Venison Loin. Served aboard a Lingonberry compote and goat cheese mashed potatoes and topped with a honey port wine reduction, this venison is smooth as butter and mild as they come. This “stuffed” girl ate every bite.

Then it was on to dessert. While I figured I might receive one of those complimentary desserts typically doled out to all those people claiming a birthday, the gents knew I was celebrating and made a special effort. They chose what would have been my choice, a Three Chocolate Parfait with plenty of fresh strawberries and piped cream. The Gaufrette wafer served as my edible birthday candle. 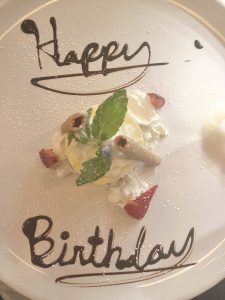 My Happy Birthday at The Drake

It couldn’t have been a more perfect evening. The 2-plus hour dining window seemed more than plenty for the restaurant’s diners. Just as everything began to wind down on our “shift,” the 8:15 reservations began to arrive, once again filling the restaurant with laughter and talk as the jazz played on. Their brief respite over, the chefs tirelessly returned to their magic act, as plate after plate of perfection began stirring once again.

The Drake Laguna Beach is reservations only with live music 7 nights a week. Open daily, seatings begin at 5:45 pm and 8:15 p.m. There is a $10 musical charge on Thursday, Friday and Saturday evenings for 2nd seating only. Complimentary delivery and pick up is available daily and onsite valet parking is available for $7. The Drake asks that you either park on Coast Highway or in valet so as not to disturb their residential neighbors.